The Effects of Technology in a Relationship 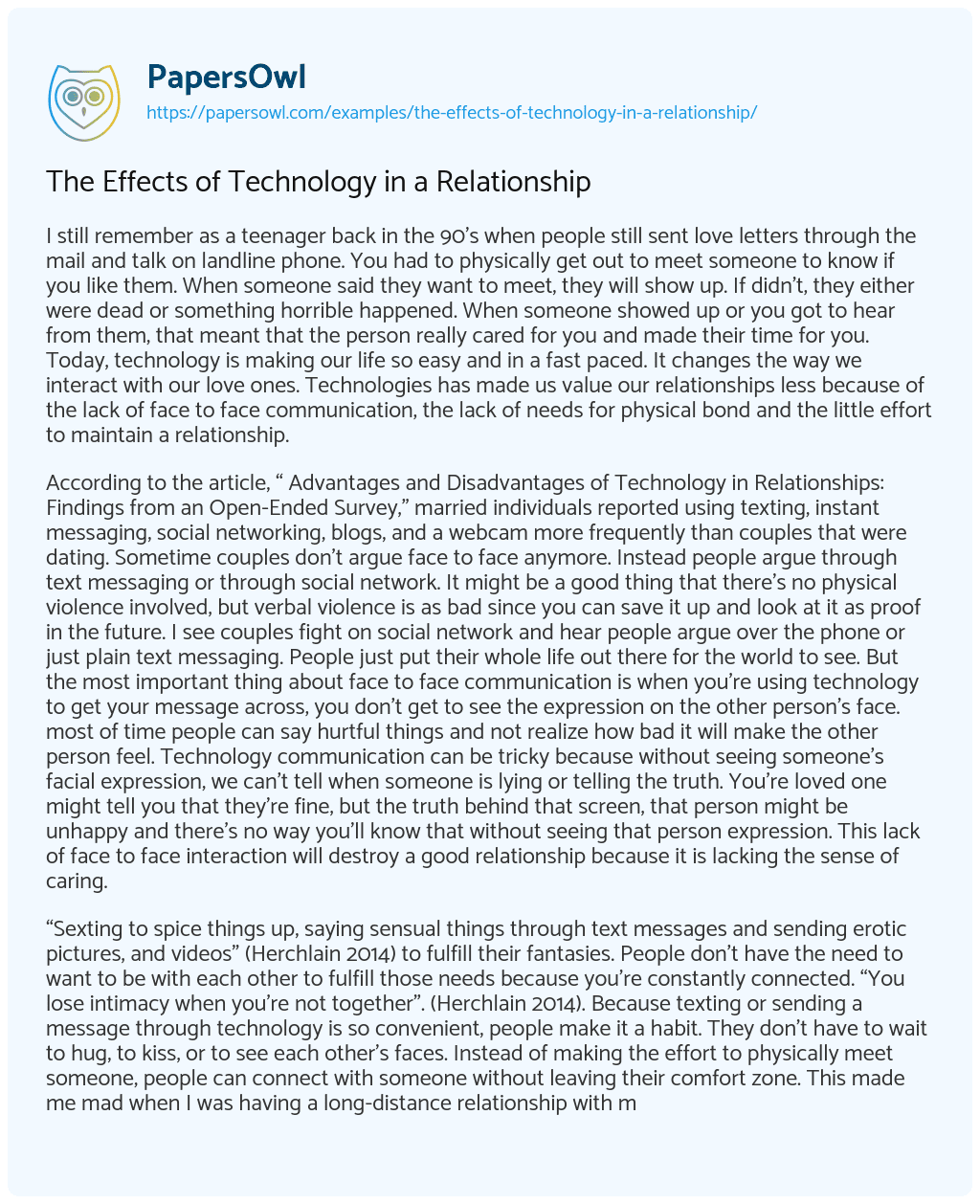 I still remember as a teenager back in the 90’s when people still sent love letters through the mail and talk on landline phone. You had to physically get out to meet someone to know if you like them. When someone said they want to meet, they will show up. If didn’t, they either were dead or something horrible happened. When someone showed up or you got to hear from them, that meant that the person really cared for you and made their time for you. Today, technology is making our life so easy and in a fast paced. It changes the way we interact with our love ones. Technologies has made us value our relationships less because of the lack of face to face communication, the lack of needs for physical bond and the little effort to maintain a relationship.

According to the article, “ Advantages and Disadvantages of Technology in Relationships: Findings from an Open-Ended Survey,” married individuals reported using texting, instant messaging, social networking, blogs, and a webcam more frequently than couples that were dating. Sometime couples don’t argue face to face anymore. Instead people argue through text messaging or through social network. It might be a good thing that there’s no physical violence involved, but verbal violence is as bad since you can save it up and look at it as proof in the future. I see couples fight on social network and hear people argue over the phone or just plain text messaging. People just put their whole life out there for the world to see. But the most important thing about face to face communication is when you’re using technology to get your message across, you don’t get to see the expression on the other person’s face. most of time people can say hurtful things and not realize how bad it will make the other person feel. Technology communication can be tricky because without seeing someone’s facial expression, we can’t tell when someone is lying or telling the truth. You’re loved one might tell you that they’re fine, but the truth behind that screen, that person might be unhappy and there’s no way you’ll know that without seeing that person expression. This lack of face to face interaction will destroy a good relationship because it is lacking the sense of caring.

“Sexting to spice things up, saying sensual things through text messages and sending erotic pictures, and videos” (Herchlain 2014) to fulfill their fantasies. People don’t have the need to want to be with each other to fulfill those needs because you’re constantly connected. “You lose intimacy when you’re not together”. (Herchlain 2014). Because texting or sending a message through technology is so convenient, people make it a habit. They don’t have to wait to hug, to kiss, or to see each other’s faces. Instead of making the effort to physically meet someone, people can connect with someone without leaving their comfort zone. This made me mad when I was having a long-distance relationship with my husband and he didn’t make much effort to visit me. Instead he spent all day texting me and complained how much he missed me. I felt neglected, as I felt the lack of interests and the little effort he shown for me. This lack of physical bond distanced our relationship.

Technology is a big distraction in a relationship. People spend way too much time on it, playing game, watching movies, T.V shows, or browsing online. They forget about the people around them. The time spent with each other turn into alone time with each other because people are frequently staring at their phones. I go to restaurant and I see that couples don’t even talk to each other even though they look like they are on a date. Instead, they’re just staring at their phone. People are so fixed to their technologies that they don’t create much memories together. The lack of memories makes it easier to let go when a relationship gets tough.

Even though technologies made our life so much easier in many ways, these negative impacts in our relationship are critical. We can still make our relationship great if we limit our time on our technology usage. Instead of letting technology takes control of our live, we should be taking control of the use of technology. Technologies may change the way we live our lives, but we should never change who we are. I sometime caught myself doing some of this stuff and I must remind myself over and over. It’s not easy since it has become a habit for everyone, but we just have to set ourselves reminders to always pay attention to the people we love and care for.

The Effects of Technology in a Relationship. (2021, Oct 16). Retrieved from https://papersowl.com/examples/the-effects-of-technology-in-a-relationship/

Technology: how it Benefits our Lives

How Technology Changed my Life

Does Technology Improve or Control our Lives

Evolution of Technology in Workplace

Does Technology Connect Us or Make more Alone?