The Effects of Soccer on Health 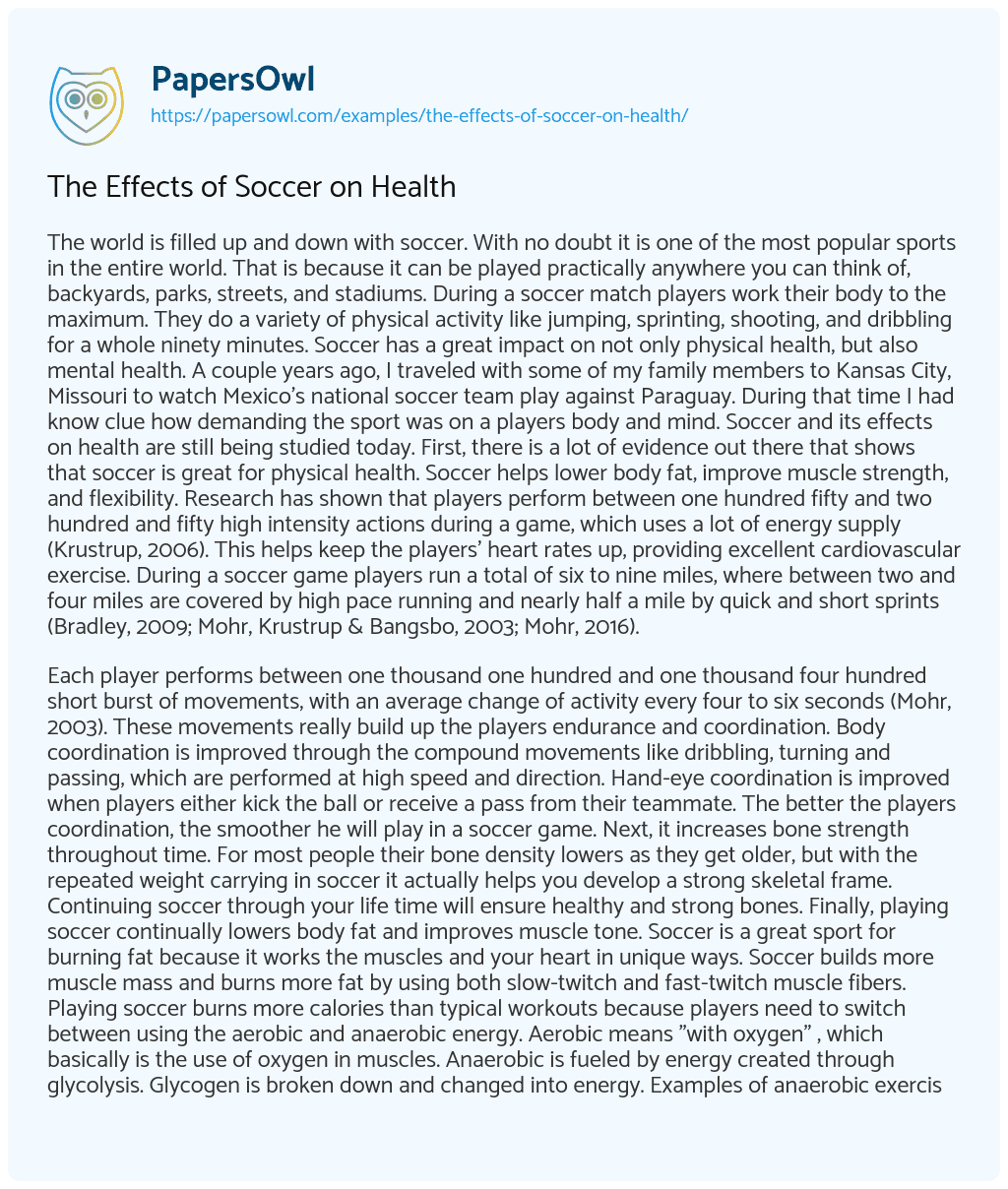 The world is filled up and down with soccer. With no doubt it is one of the most popular sports in the entire world. That is because it can be played practically anywhere you can think of, backyards, parks, streets, and stadiums. During a soccer match players work their body to the maximum. They do a variety of physical activity like jumping, sprinting, shooting, and dribbling for a whole ninety minutes. Soccer has a great impact on not only physical health, but also mental health. A couple years ago, I traveled with some of my family members to Kansas City, Missouri to watch Mexico’s national soccer team play against Paraguay. During that time I had know clue how demanding the sport was on a players body and mind. Soccer and its effects on health are still being studied today. First, there is a lot of evidence out there that shows that soccer is great for physical health. Soccer helps lower body fat, improve muscle strength, and flexibility. Research has shown that players perform between one hundred fifty and two hundred and fifty high intensity actions during a game, which uses a lot of energy supply (Krustrup, 2006). This helps keep the players’ heart rates up, providing excellent cardiovascular exercise. During a soccer game players run a total of six to nine miles, where between two and four miles are covered by high pace running and nearly half a mile by quick and short sprints (Bradley, 2009; Mohr, Krustrup & Bangsbo, 2003; Mohr, 2016).

Each player performs between one thousand one hundred and one thousand four hundred short burst of movements, with an average change of activity every four to six seconds (Mohr, 2003). These movements really build up the players endurance and coordination. Body coordination is improved through the compound movements like dribbling, turning and passing, which are performed at high speed and direction. Hand-eye coordination is improved when players either kick the ball or receive a pass from their teammate. The better the players coordination, the smoother he will play in a soccer game. Next, it increases bone strength throughout time. For most people their bone density lowers as they get older, but with the repeated weight carrying in soccer it actually helps you develop a strong skeletal frame. Continuing soccer through your life time will ensure healthy and strong bones. Finally, playing soccer continually lowers body fat and improves muscle tone. Soccer is a great sport for burning fat because it works the muscles and your heart in unique ways. Soccer builds more muscle mass and burns more fat by using both slow-twitch and fast-twitch muscle fibers. Playing soccer burns more calories than typical workouts because players need to switch between using the aerobic and anaerobic energy. Aerobic means “with oxygen” , which basically is the use of oxygen in muscles. Anaerobic is fueled by energy created through glycolysis. Glycogen is broken down and changed into energy. Examples of anaerobic exercises for a soccer player would include jumping and sprinting.

Improvement of physical health is not the only benefit you get from playing soccer. Mental health also improves while training and playing soccer. To begin, the experience of failing and trying again in soccer, whether that be in a game or in training, provides a learning process that transfer well into receiving better school achievements. “A controlled longitudinal study found that adolescents who participated in sports showed improved grade point averages, had increased attachment to school, and were more likely to attend college” (Larson, Reed, and Sean Seepersad). These teenagers that keep up with sport throughout their lifetime will learn that things in you learn practicing sports will carry on into other parts of life. I know this because while playing soccer during my last couple of years I grew more socially and mentally. I stayed more active in soccer games and reacted faster; I would be ready to slide tackle the opponent and ball when they came running towards me. In other things, such as math class, I noticed I began solving equations a bit faster and was more focused during class time. As a kid growing up I was a quiet and shy. When playing the game, I could not just stand back; I had to get into the action by trying to score a goal or trying to get a pass. As my confidence developed, I became more bold and outgoing in other parts of my life. Soccer also helps develop creative decision making. The ability to produce creative solutions is key to expert performance in sport.

In soccer, for example, an attribute of high-performance players is the ability to be surprising in their decision-making processes under time constraints, thereby allowing them to be more effective in unique performance situations and make it more difficult for opponents to predict what they do next (Roca A, Ford PR, Memmert D, 2018). This is one percent true in my opinion, for many people they think soccer doesn’t take much skill you just need to kick the ball. They however are wrong, soccer challenges you to think and act fast. You need to be a smart player in the decisions you take, so you dont cause a mistake or even a goal opportunity.

The Effects of Soccer on Health. (2019, Sep 11). Retrieved from https://papersowl.com/examples/the-effects-of-soccer-on-health/

The Psychology Side of Soccer