The Effects of Cell Phone Use 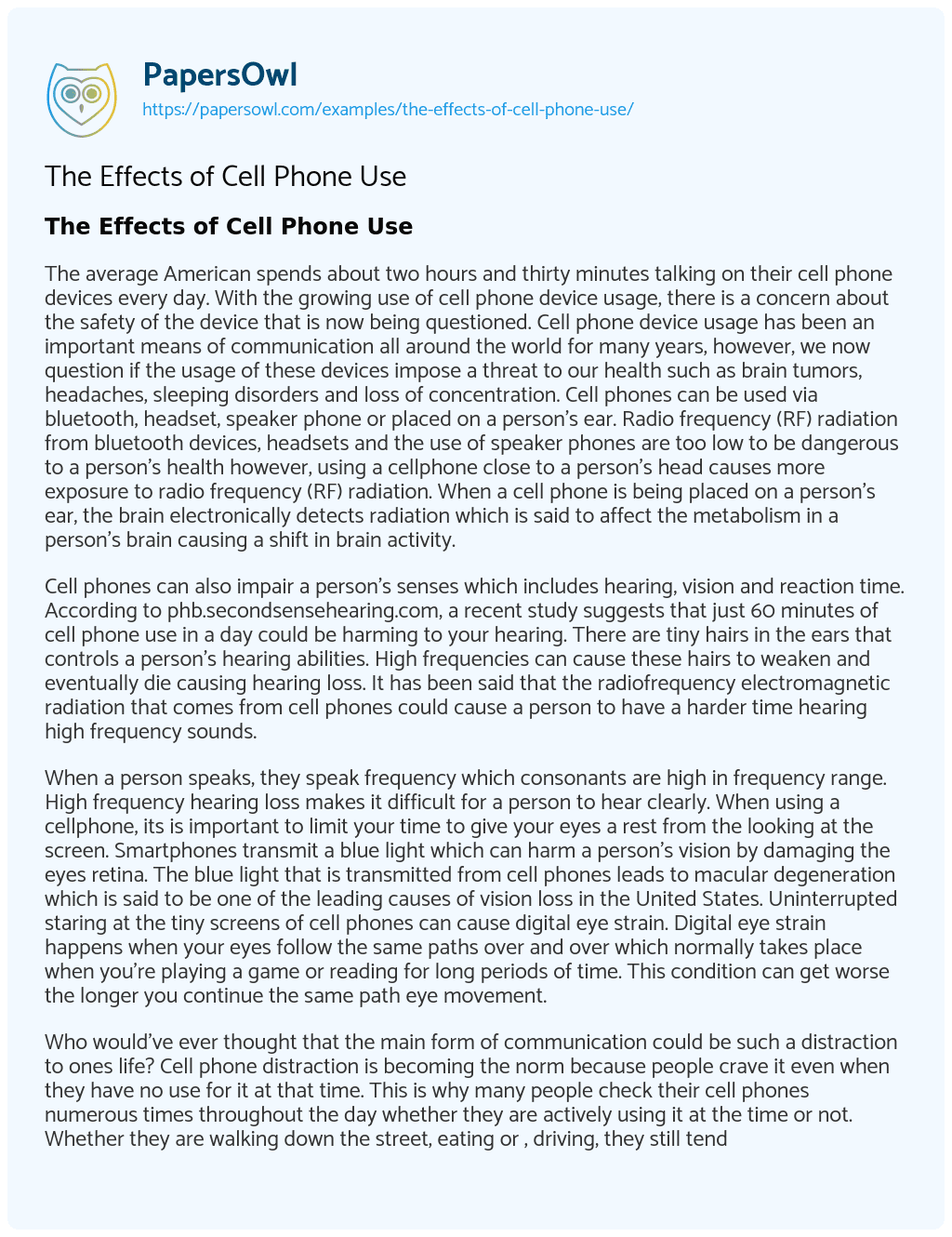 The Effects of Cell Phone Use

The average American spends about two hours and thirty minutes talking on their cell phone devices every day. With the growing use of cell phone device usage, there is a concern about the safety of the device that is now being questioned. Cell phone device usage has been an important means of communication all around the world for many years, however, we now question if the usage of these devices impose a threat to our health such as brain tumors, headaches, sleeping disorders and loss of concentration. Cell phones can be used via bluetooth, headset, speaker phone or placed on a person’s ear. Radio frequency (RF) radiation from bluetooth devices, headsets and the use of speaker phones are too low to be dangerous to a person’s health however, using a cellphone close to a person’s head causes more exposure to radio frequency (RF) radiation. When a cell phone is being placed on a person’s ear, the brain electronically detects radiation which is said to affect the metabolism in a person’s brain causing a shift in brain activity.

Cell phones can also impair a person’s senses which includes hearing, vision and reaction time. According to phb.secondsensehearing.com, a recent study suggests that just 60 minutes of cell phone use in a day could be harming to your hearing. There are tiny hairs in the ears that controls a person’s hearing abilities. High frequencies can cause these hairs to weaken and eventually die causing hearing loss. It has been said that the radiofrequency electromagnetic radiation that comes from cell phones could cause a person to have a harder time hearing high frequency sounds.

When a person speaks, they speak frequency which consonants are high in frequency range. High frequency hearing loss makes it difficult for a person to hear clearly. When using a cellphone, its is important to limit your time to give your eyes a rest from the looking at the screen. Smartphones transmit a blue light which can harm a person’s vision by damaging the eyes retina. The blue light that is transmitted from cell phones leads to macular degeneration which is said to be one of the leading causes of vision loss in the United States. Uninterrupted staring at the tiny screens of cell phones can cause digital eye strain. Digital eye strain happens when your eyes follow the same paths over and over which normally takes place when you’re playing a game or reading for long periods of time. This condition can get worse the longer you continue the same path eye movement.

Who would’ve ever thought that the main form of communication could be such a distraction to ones life? Cell phone distraction is becoming the norm because people crave it even when they have no use for it at that time. This is why many people check their cell phones numerous times throughout the day whether they are actively using it at the time or not. Whether they are walking down the street, eating or , driving, they still tend to check their phone screens. Even when cell phone are not being used, the presence of them could affect a person’s cognitive performance. The distraction of cell phones could be a danger to the cell phone users or others around them. The split second that it takes to check a cellphone, something could go wrong and cause fatality, especially when driving. People are so used to checking their phones throughout the day, think they can check their phones while driving. It only takes a split second to remove your eyes from the road which can cause an accident. When driving, cell phones causes you to lose your peripheral vision and awareness. It is humanly impossible for a person to concentrate on two separate things with equal intensity such as using your cellphone and driving. Many times people are unaware of the frequency and the extent of their cell phone use. Raising awareness is the first step in decreasing cell phone use.

Bahlul R. (2018, August 24). Blue Light from Your Phone May Be Permanently Damaging Your Eyes.

The Effects of Cell Phone Use. (2020, Apr 25). Retrieved from https://papersowl.com/examples/the-effects-of-cell-phone-use/

Cell Phone Use during School

No Cell Phones Allowed in Class

Cell Phones Give off