The Diagnosis of Bipolar Disorder 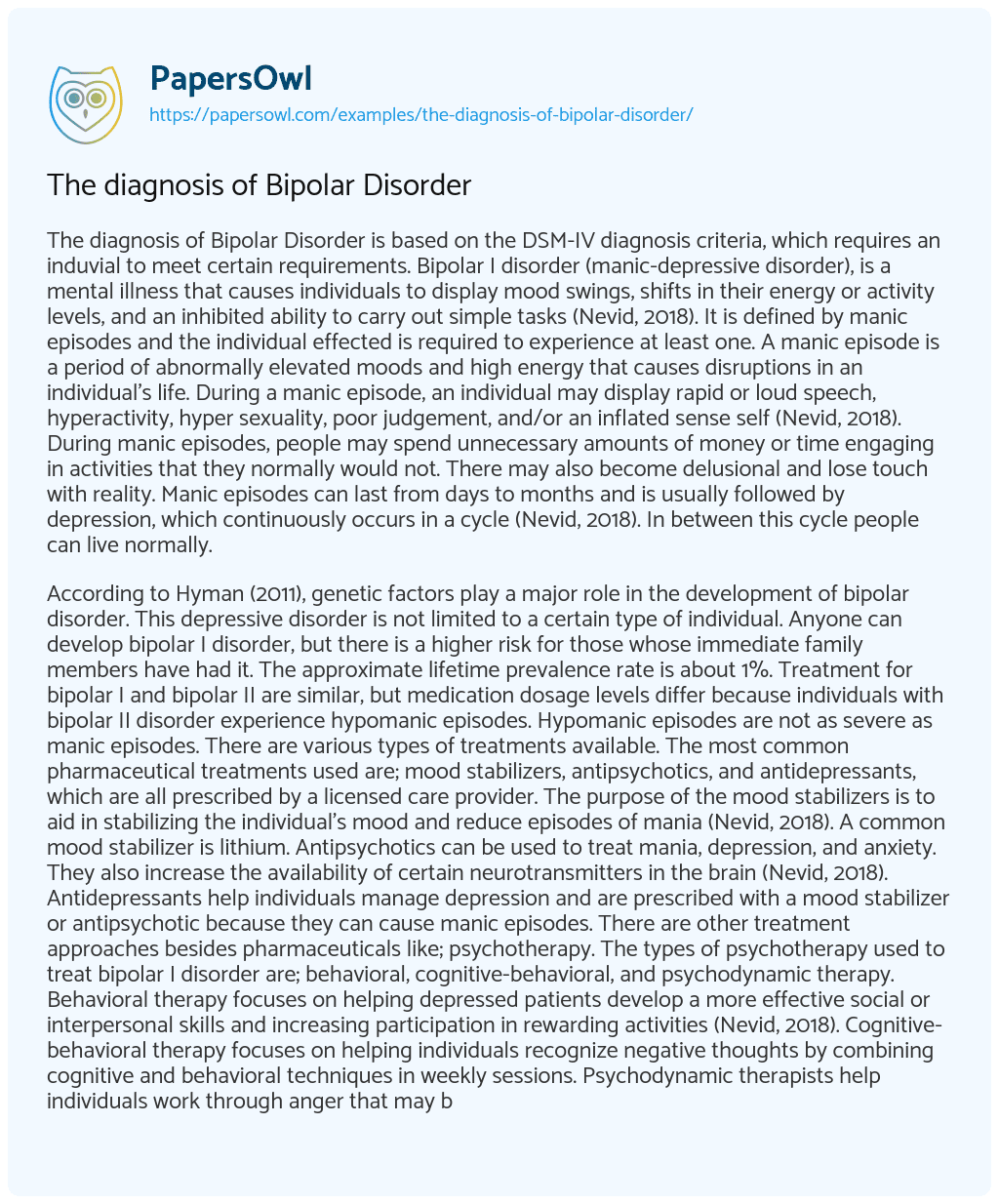 The diagnosis of Bipolar Disorder is based on the DSM-IV diagnosis criteria, which requires an induvial to meet certain requirements. Bipolar I disorder (manic-depressive disorder), is a mental illness that causes individuals to display mood swings, shifts in their energy or activity levels, and an inhibited ability to carry out simple tasks (Nevid, 2018). It is defined by manic episodes and the individual effected is required to experience at least one. A manic episode is a period of abnormally elevated moods and high energy that causes disruptions in an individual’s life. During a manic episode, an individual may display rapid or loud speech, hyperactivity, hyper sexuality, poor judgement, and/or an inflated sense self (Nevid, 2018). During manic episodes, people may spend unnecessary amounts of money or time engaging in activities that they normally would not. There may also become delusional and lose touch with reality. Manic episodes can last from days to months and is usually followed by depression, which continuously occurs in a cycle (Nevid, 2018). In between this cycle people can live normally.

According to Hyman (2011), genetic factors play a major role in the development of bipolar disorder. This depressive disorder is not limited to a certain type of individual. Anyone can develop bipolar I disorder, but there is a higher risk for those whose immediate family members have had it. The approximate lifetime prevalence rate is about 1%. Treatment for bipolar I and bipolar II are similar, but medication dosage levels differ because individuals with bipolar II disorder experience hypomanic episodes. Hypomanic episodes are not as severe as manic episodes. There are various types of treatments available. The most common pharmaceutical treatments used are; mood stabilizers, antipsychotics, and antidepressants, which are all prescribed by a licensed care provider. The purpose of the mood stabilizers is to aid in stabilizing the individual’s mood and reduce episodes of mania (Nevid, 2018). A common mood stabilizer is lithium. Antipsychotics can be used to treat mania, depression, and anxiety. They also increase the availability of certain neurotransmitters in the brain (Nevid, 2018). Antidepressants help individuals manage depression and are prescribed with a mood stabilizer or antipsychotic because they can cause manic episodes. There are other treatment approaches besides pharmaceuticals like; psychotherapy. The types of psychotherapy used to treat bipolar I disorder are; behavioral, cognitive-behavioral, and psychodynamic therapy. Behavioral therapy focuses on helping depressed patients develop a more effective social or interpersonal skills and increasing participation in rewarding activities (Nevid, 2018). Cognitive-behavioral therapy focuses on helping individuals recognize negative thoughts by combining cognitive and behavioral techniques in weekly sessions. Psychodynamic therapists help individuals work through anger that may be due to unknown, underlying causes and bring awareness to what that issue may be by using verbal expressions. There are various options available for those who have bipolar I disorder and are seeking assistance.

Cantük’s (2014) study was a follow up study to determine the hormonal changes in bipolar euthyroid patients that were treated with lithium for one year. The independent variable is the duration of lithium treatment. The dependent variables were the hormonal changes and thyroid volumes. The participants were 23 bipolar I disorder patients that did not have any addition axis I diseases or conditions (Cantük, 2014). The controls were 25 healthy individuals between ages 18 to 65 who matched the participants’ age and gender. Thyroid hormone levels and thyroid volumes were measured within both the patients and controls, which were compared at a baseline along with lithium levels (Cantük, 2014). They were re-examined after six months for thyroid hormones, and at the first-year mark for thyroid hormones and lithium levels. In the beginning, thyroid levels were significantly lower in the controls than in the patients. The scale of measurements administered were; the Sociodemographic and Clinical Characteristics Data Form, Hamilton Depression Rating Scale (HAM-D), Young Mania Rating Scale (YMRS), and the Structured Clinical Interview for DSM-IV Axis I Disorders. Descriptive methods (frequency, median, standard deviation) were used for the statistical evaluation of data and cui-square test were used for assessment of associations between categorical variables (Cantük, 2014). Results showed that the thyroid hormone levels did not change in patients during the follow-up period and there was no significant difference between the final and initial TSH levels, duration of illness and lithium treatment, initial thyroid volumes, and the initial TShI levels (Cantük, 2014). In conclusion, Lithium can be safely used in bipolar patients who were already receiving this treatment before and in those who did not develop any thyroid problems for a substantial period.

Ziprasidone is an atypical antipsychotic. The purpose of Findling’s (2013) study was to evaluate the short and long-term-term success, safety, and the subjects’ ability to tolerate ziprasidone against the placebo for manic or mixed episodes in individuals with bipolar disorder. The study was a 4 week, random, multiple-site, double-blind, placebo-controlled trial followed by a 26-week open-label extension study (Findling, 2013). Subjects were selected from inpatient and outpatient centers in the world and were required to meet the DSM- IV diagnostic criteria. Majority of the subjects were white and almost two-thirds were boys, all between ages 10 to17. The independent variable is the doses of ziprasidone administered and the dependent variables are the weight and metabolic profile. The research methods and measurements used were the Young Mania Rating Scale (YMRS) scores and safety assessments, which included the weight and body mass index (BMI) of subjects, adverse events (AE), vital signs, laboratory measures, electrocardiograms, and movement disorder ratings (Findling, 2013). These were all specifically measured at a baseline during weeks 1, 2, 6, 10, 14, 18, 22, and 26, if an individual is terminated early, and posttreatment. Vital signs and ECG findings were recorded at weeks 1, 2, 3, and at the end of treatment. The ziprasidone oral capsules were distrusted twice a day with meals and titrated over a 1 to 2-week period from an initial dose of 20 mg/day, adjusting based on the weight of the subject if necessary after titration (Findling, 2013). After the last double-blind study visit, double-blind medication was reduced for 6 days and ziprasidone went up to a dose of 80160 mg/day (Findling, 2013).

Results showed that there was a significant improvement in acute ziprasidone therapy compared to the placebo outcome measurements in children and adolescents on YMRS and CGI-S with manic or mixed episodes of bipolar I disorder (Findling, 2013). According to table 1, amongst the two-thirds of participants that were randomized into treatment groups and treated, 65% ziprasidone and 58 % placebo subjects completed the placebo-controlled trial. After the enrollment of 162 subjects and duration of treatment for 98 days, the average change in YMRS score from the end of the placebo-controlled trial to the open-label extension was 95%. There were no significant changes in movement disorder scales. The most common AEs were sedation, somnolence, headache, and insomnia. In table 2, 62% of the subjects’ most recent episodes experienced were mixed; 28.6 % in the manic, and 9.3% in the single episode categories. The average duration of illnesses was 10.7 months (11.6 months for the ziprasidone and 9.1 months for the placebo group) since first diagnosis (Findling, 2013). Overall, the results from this study demonstrates that ziprasidone at doses of 40–160 mg/day is an effective treatment for ages that range from 10–17 years with a manic or mixed episode associated with bipolar I disorder.

The purpose of Nusslock’s (2015) article was to describe the effects of a psychosocial intervention that was designed to target and positively influence occupational functioning in individuals suffering from bipolar I disorder. The duration of the study was approximately 2.5 years. The independent variable of this study is the maintence treatment and the dependent variable is the impact on occupational functioning. The participants were only eligible if they were acutely ill, ages 18 to 60, and if they have had a lifetime diagnosis of bipolar I disorder with schizoaffective disorder, experiencing their third or more manic episode (Nusslock, 2015). The Bech-Rafaelsen Mania Scale and the 17item HAM-D was also utilized to determine their eligibility. Only one assessment was necessary for each patient, but the required scores for both was greater than or equal to 15. Of those 125 out of 175 participants who reached stabilization and entered the maintence trial; occupational functioning ratings were available for 94, 99, 86, and 70 subjects at baseline, start of treatment, end of 1 year of treatment, and end of 2 years of treatment (Nusslock, 2015). Patients were randomly assigned to receive either acute and maintenance interpersonal and social rhythm therapy, acute and maintenance intensive clinical management, acute interpersonal and social rhythm therapy along with maintenance intensive clinical management, or acute intensive clinical management and maintenance interpersonal and social rhythm therapy (Nusslock, 2015). The method used to measure occupational functioning was the UCLA Social Attainment Scale, which took place at baseline, at the end of acute treatment, and after the first and second year of maintenance treatments.

Three peer-review articles were utilized to display possible treatments for bipolar I disorder. Though all three studies were effective, there were naturally limitations to each. It was determined that lithium can safely be used in bipolar patients who were already receiving this treatment and in those who did not develop any thyroid problems. Limitations of the lithium study were the short time periods between checkups and the number of participants excluded. Five patients and six controls were excluded from the study because thyroid nodules were detected. Research showed that ziprasidone at doses of 40–160 mg/day is an effective treatment for ages 10 to 17 with a manic or mixed episode associated with bipolar I disorder. A limitation of this is that the study excluded children under the age 10. Nusslock’s (2015) study showed that interpersonal and social rhythm therapy has a greater ability to improve and maintain occupational functioning than a psychoeducational approach. This study was limited because it was not possible to accurately examine the differences in the benefits of treatment on vocational functioning for each occupational category due to the sample size. Overall, the samples were a limitation of each study.

The diagnosis of Bipolar Disorder. (2019, Feb 01). Retrieved from https://papersowl.com/examples/the-diagnosis-of-bipolar-disorder/

Bipolar Disorder and its Treatment