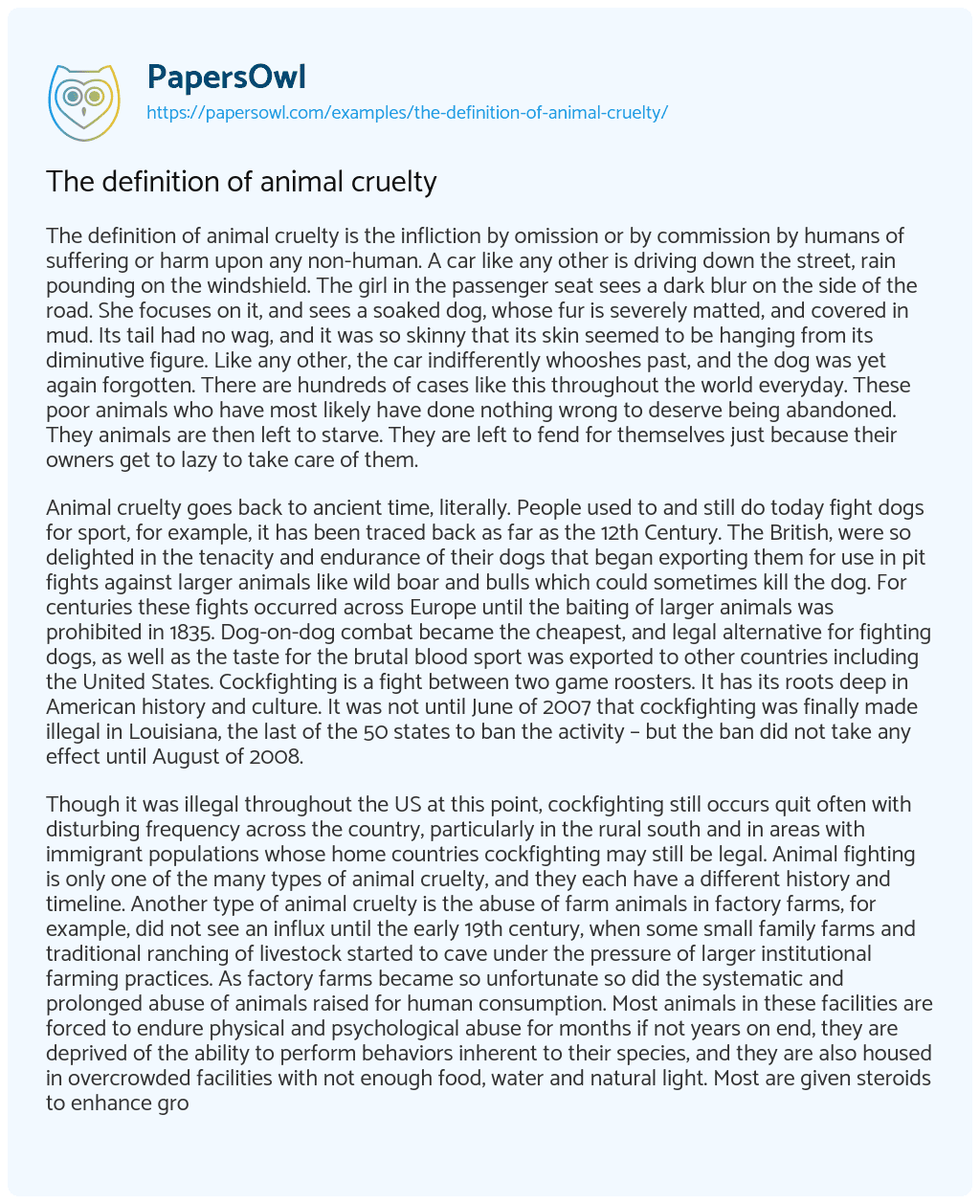 The definition of animal cruelty is the infliction by omission or by commission by humans of suffering or harm upon any non-human. A car like any other is driving down the street, rain pounding on the windshield. The girl in the passenger seat sees a dark blur on the side of the road. She focuses on it, and sees a soaked dog, whose fur is severely matted, and covered in mud. Its tail had no wag, and it was so skinny that its skin seemed to be hanging from its diminutive figure. Like any other, the car indifferently whooshes past, and the dog was yet again forgotten. There are hundreds of cases like this throughout the world everyday. These poor animals who have most likely have done nothing wrong to deserve being abandoned. They animals are then left to starve. They are left to fend for themselves just because their owners get to lazy to take care of them.

Animal cruelty goes back to ancient time, literally. People used to and still do today fight dogs for sport, for example, it has been traced back as far as the 12th Century. The British, were so delighted in the tenacity and endurance of their dogs that began exporting them for use in pit fights against larger animals like wild boar and bulls which could sometimes kill the dog. For centuries these fights occurred across Europe until the baiting of larger animals was prohibited in 1835. Dog-on-dog combat became the cheapest, and legal alternative for fighting dogs, as well as the taste for the brutal blood sport was exported to other countries including the United States. Cockfighting is a fight between two game roosters. It has its roots deep in American history and culture. It was not until June of 2007 that cockfighting was finally made illegal in Louisiana, the last of the 50 states to ban the activity – but the ban did not take any effect until August of 2008.

Though it was illegal throughout the US at this point, cockfighting still occurs quit often with disturbing frequency across the country, particularly in the rural south and in areas with immigrant populations whose home countries cockfighting may still be legal. Animal fighting is only one of the many types of animal cruelty, and they each have a different history and timeline. Another type of animal cruelty is the abuse of farm animals in factory farms, for example, did not see an influx until the early 19th century, when some small family farms and traditional ranching of livestock started to cave under the pressure of larger institutional farming practices. As factory farms became so unfortunate so did the systematic and prolonged abuse of animals raised for human consumption. Most animals in these facilities are forced to endure physical and psychological abuse for months if not years on end, they are deprived of the ability to perform behaviors inherent to their species, and they are also housed in overcrowded facilities with not enough food, water and natural light. Most are given steroids to enhance growth, and antibiotics to fend off illnesses that are likely to occur in such unsanitary conditions. Their eventual slaughter is often performed in a manner as inhumane as the condition in which they are forced to exist until that day.

There are still good people who care about this and are working for the improvement of the ways in which animals who are raised for food are handled and slaughtered. Certified Humane offers alternatives to people who choose to eat meat, eggs, dairy and poultry but want assurances that the animals providing these were raised and handled humanely. Certified Humane sets stringent guidelines and conducts rigorous inspections of businesses that raise, handle and slaughter animals for food. The Certified Humane Animal Care Standards require that, animals are allowed to engage in their natural behaviors.Animals are raised with sufficient space, shelter and gentle handling to limit stress.Animals have access to ample fresh water and a healthy diet without added antibiotics or hormones.Animals are sufficiently protected from the weather.Animals are provided with other necessary features that ensure their safety, health and comfort.Managers and caretakers are thoroughly trained, skilled and competent in animal husbandry and welfare. Managers and caretakers have good working knowledge of their system and the livestock in their care.

The birth of the Internet opened the door for new types of animal abuse to emerge. Among the images of animal cruelty that are available on the Internet are “crush videos” in which well dressed women are shown crushing small animals with their bare feet or stiletto heels. These videos are able to infiltrate mainstream audiences because of increased file sharing networks and the growing popularity of websites that display violent videos for their shock value. Though illegal under the 1999 federal legislation later nicknamed “The Crush Act,” it is often very difficult to prosecute the offenders of these crimes, as they are usually able to hide behind the anonymity offered by the virtual world. There are people working on ways to get these videos so that the poor animals won’t be abused anymore.

Beyond the need to recognize and put an end to animal cruelty for the sake of the animal victims involved, also important to note is the very direct connection between animal cruelty and human violence. There was a survey done of 50 shelters for victims of domestic violence and child abuse indicated that during their intake interviews, 85% of women and 63% of children spoke about incidents of pet abuse that occurred within their home. Further, of the shelter staff surveyed, 83% reported that they have observed the coexistence of domestic violence and pet abuse.

The definition of animal cruelty. (2019, Mar 18). Retrieved from https://papersowl.com/examples/the-definition-of-animal-cruelty/

Animal Cruelty under the Big Top