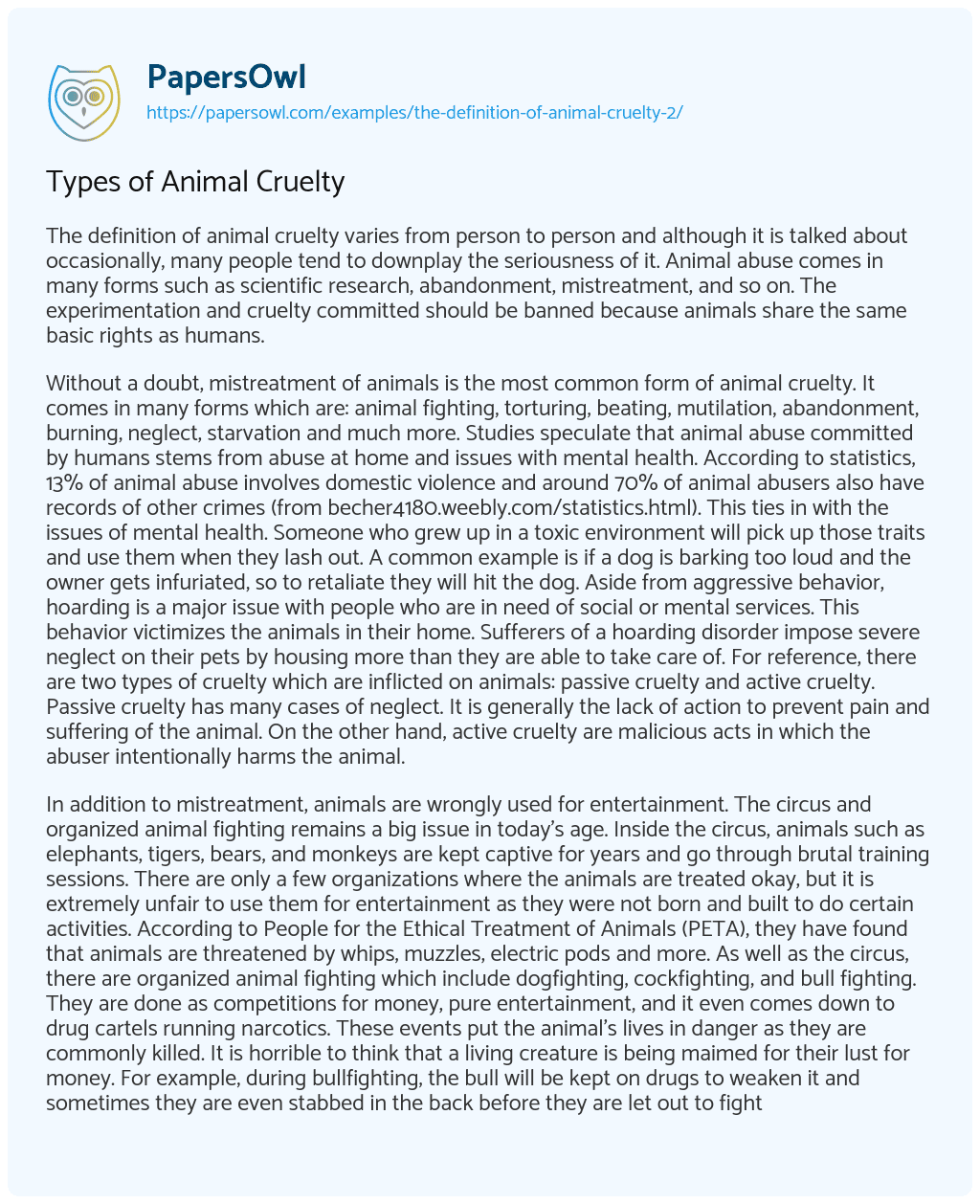 The definition of animal cruelty varies from person to person and although it is talked about occasionally, many people tend to downplay the seriousness of it. Animal abuse comes in many forms such as scientific research, abandonment, mistreatment, and so on. The experimentation and cruelty committed should be banned because animals share the same basic rights as humans.

Without a doubt, mistreatment of animals is the most common form of animal cruelty. It comes in many forms which are: animal fighting, torturing, beating, mutilation, abandonment, burning, neglect, starvation and much more. Studies speculate that animal abuse committed by humans stems from abuse at home and issues with mental health. According to statistics, 13% of animal abuse involves domestic violence and around 70% of animal abusers also have records of other crimes (from becher4180.weebly.com/statistics.html). This ties in with the issues of mental health. Someone who grew up in a toxic environment will pick up those traits and use them when they lash out. A common example is if a dog is barking too loud and the owner gets infuriated, so to retaliate they will hit the dog. Aside from aggressive behavior, hoarding is a major issue with people who are in need of social or mental services. This behavior victimizes the animals in their home. Sufferers of a hoarding disorder impose severe neglect on their pets by housing more than they are able to take care of. For reference, there are two types of cruelty which are inflicted on animals: passive cruelty and active cruelty. Passive cruelty has many cases of neglect. It is generally the lack of action to prevent pain and suffering of the animal. On the other hand, active cruelty are malicious acts in which the abuser intentionally harms the animal.

In addition to mistreatment, animals are wrongly used for entertainment. The circus and organized animal fighting remains a big issue in today’s age. Inside the circus, animals such as elephants, tigers, bears, and monkeys are kept captive for years and go through brutal training sessions. There are only a few organizations where the animals are treated okay, but it is extremely unfair to use them for entertainment as they were not born and built to do certain activities. According to People for the Ethical Treatment of Animals (PETA), they have found that animals are threatened by whips, muzzles, electric pods and more. As well as the circus, there are organized animal fighting which include dogfighting, cockfighting, and bull fighting. They are done as competitions for money, pure entertainment, and it even comes down to drug cartels running narcotics. These events put the animal’s lives in danger as they are commonly killed. It is horrible to think that a living creature is being maimed for their lust for money. For example, during bullfighting, the bull will be kept on drugs to weaken it and sometimes they are even stabbed in the back before they are let out to fight. At times, the ears will be cut off while they are alive for a reward. Moreover, animal slaughterhouses have to be the most controversial topic of animal cruelty. Although many argue that slaughterhouses kill in humane, less painful ways, majority of incidents have been reported where an animal is mistreated. According to Matt Hunter from MailOnline, from www.daily.co.uk, “Animals were subjected to brutal conditions and horrifying deaths in more than 4,000 cases in the last two years, an investigation has uncovered. The report found there were thousands of serious breaches of animal welfare regulations, including chickens and pigs being boiled alive and cattle freezing to death on Lorries (large motor vehicle for transporting goods). Breakdowns on production lines and problems with equipment can lead to livestock suffering needlessly painful deaths.” Other than animals being unfairly treated, illegal practices can lead to bacteria spreading to food which in turn leads to food poisoning. Matt Hunter from MailOnline, from www.dailymail.co.uk, states, “Infections in poultry increase when they defecate more due to stress. Contaminated poultry – which accounts for about 80% of food poisoning – kills 100 people every year.”

Another big issue in the world of animal cruelty is animal testing in labs. Over 25 million animals are being used in vivisection (another word for experiments), product and cosmetic testing, and for plain science education. Other than animals suffering from the stress of everyday experiments, they are often kept in small cages where they can stay for weeks. The conditions they are left in can be deemed horrific. Experiments that occur inside the labs range from testing new drugs, poisoning for toxicity testing, burning skin, causing brain damage, blinding, testing for makeup and more. These include protocols that can cause severe suffering. Long-term social isolation, electric shocks, withholding of food and water, or repeated breeding are a few examples. On the topic of cosmetic testing, animals are used so that they can test a product’s safety. It’s to ensure that a product doesn’t harm a human’s eyes and skin; it’s also tested for overall toxicity. Although animal testing for cosmetics is banned in places such as the U.S and the U.K, it occurs in others like China. A big reason on why the public opinion and protocols have changed is because a lot of the testing has been proven unreliable. Despite the strong opinions of those who oppose, there are still some who support animal testing for medicine only because it involves the improvement of human health and the extension of human life. This can be argued against because of the facts presented. Some examples of unreliable testing are:

With this in mind, animal cruelty in any shape or form is inhumane and should not be trusted fully. Luckily, many laws have been put in place to protect the rights of animals. For the U.S, many changes are being discussed in the government to ensure that whoever commits animal cruelty will be charged accordingly. Important and necessary laws that have been implemented are:

There are many ways to help animals in need in general or if it is witnessed it. The best thing a person can do is report what they see to their local law enforcement. Another option is to contact places such as, The Society for Prevention of Cruelty to Animals (SPCA), People for Ethical Treatment of Animals (PETA), animal rescue agencies, animal shelters, etc. When it comes to mental health, it is best to learn from others mistakes. If there are pets at home, parents need to teach their children to love and respect them and lead by example. School teachers should also speak about respecting wild and domestic animals as well as discuss a few animal cruelty facts.
Overall, animal cruelty is something that needs to be spoken about often. Animals are not capable of speaking, so they cannot fight back against their owners or have a say in things. But this does not mean they don’t deserve the same rights as humans. As creatures on earth, they need to be treated kindly and be respected. Animal cruelty comes in many forms such as scientific research, abandonment, mistreatment, and so on. From the many statements presented, it can be concurred that animal abuse is morally wrong. When it comes to experiments, the results from it are unreliable and dangerous. In general, experimentation and cruelty committed need to be banned worldwide because animals share the same basic rights as humans.