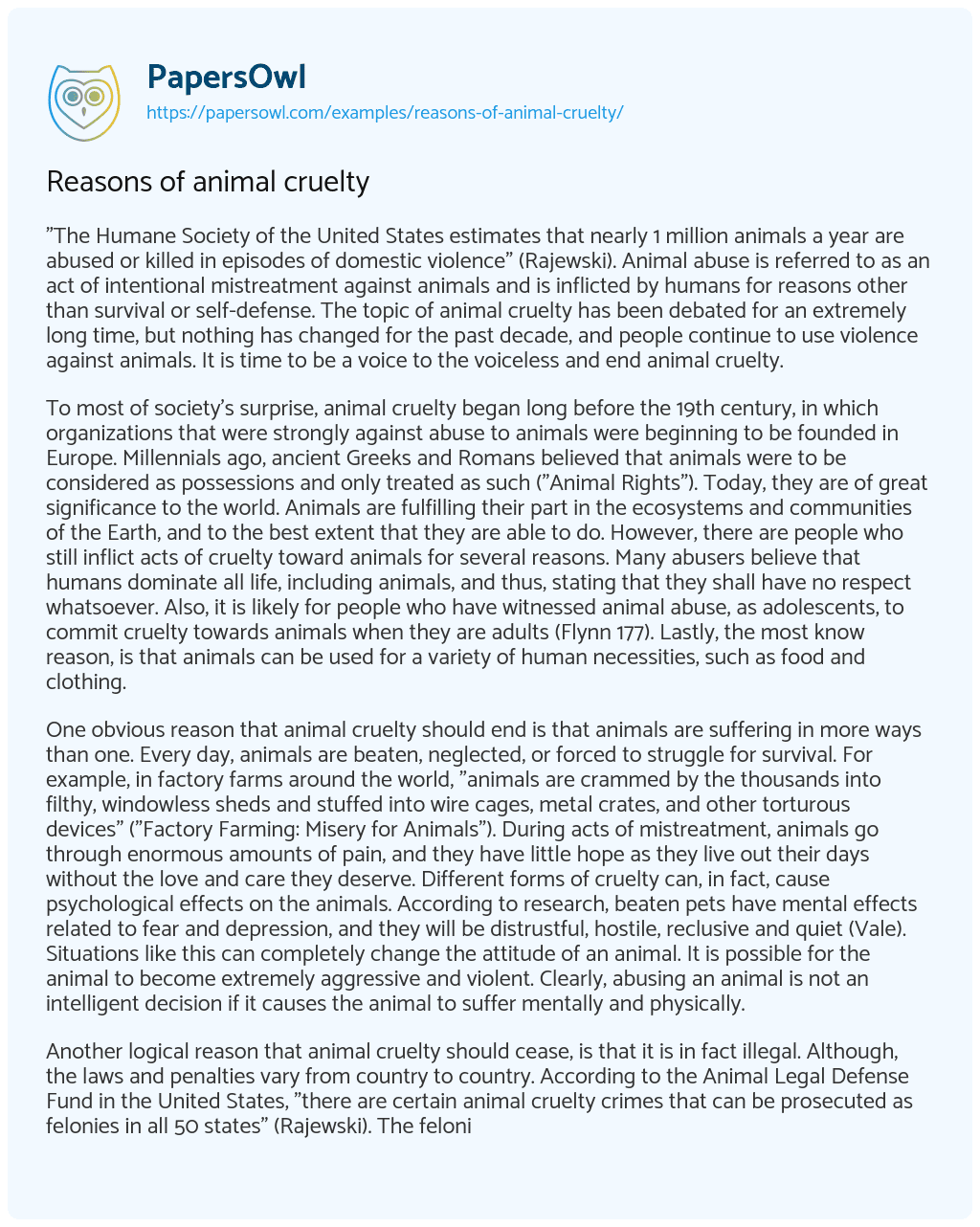 “The Humane Society of the United States estimates that nearly 1 million animals a year are abused or killed in episodes of domestic violence” (Rajewski). Animal abuse is referred to as an act of intentional mistreatment against animals and is inflicted by humans for reasons other than survival or self-defense. The topic of animal cruelty has been debated for an extremely long time, but nothing has changed for the past decade, and people continue to use violence against animals. It is time to be a voice to the voiceless and end animal cruelty.

To most of society’s surprise, animal cruelty began long before the 19th century, in which organizations that were strongly against abuse to animals were beginning to be founded in Europe. Millennials ago, ancient Greeks and Romans believed that animals were to be considered as possessions and only treated as such (“Animal Rights”). Today, they are of great significance to the world. Animals are fulfilling their part in the ecosystems and communities of the Earth, and to the best extent that they are able to do. However, there are people who still inflict acts of cruelty toward animals for several reasons. Many abusers believe that humans dominate all life, including animals, and thus, stating that they shall have no respect whatsoever. Also, it is likely for people who have witnessed animal abuse, as adolescents, to commit cruelty towards animals when they are adults (Flynn 177). Lastly, the most know reason, is that animals can be used for a variety of human necessities, such as food and clothing.

One obvious reason that animal cruelty should end is that animals are suffering in more ways than one. Every day, animals are beaten, neglected, or forced to struggle for survival. For example, in factory farms around the world, “animals are crammed by the thousands into filthy, windowless sheds and stuffed into wire cages, metal crates, and other torturous devices” (“Factory Farming: Misery for Animals”). During acts of mistreatment, animals go through enormous amounts of pain, and they have little hope as they live out their days without the love and care they deserve. Different forms of cruelty can, in fact, cause psychological effects on the animals. According to research, beaten pets have mental effects related to fear and depression, and they will be distrustful, hostile, reclusive and quiet (Vale). Situations like this can completely change the attitude of an animal. It is possible for the animal to become extremely aggressive and violent. Clearly, abusing an animal is not an intelligent decision if it causes the animal to suffer mentally and physically.

Another logical reason that animal cruelty should cease, is that it is in fact illegal. Although, the laws and penalties vary from country to country. According to the Animal Legal Defense Fund in the United States, “there are certain animal cruelty crimes that can be prosecuted as felonies in all 50 states” (Rajewski). The felonies can eventually lead to an array of penalties. However, because of how society views animal cruelty as a less important issue, the penalties are not as drastic. For example, in France, the maximum penalty for abusing an animal is up to two years in prison with the fine of $33,000. Or in Russia, where the maximum penalty is up to only six months in prison (Hong). Unfortunately, in countries that have laws that protect animals from being abused, the punishments only consist of jail time and fines. Whether or not it be a radical penalty, abusing animals is still illegal, and it would be foolish of you to go against the law.

Animal Cruelty under the Big Top