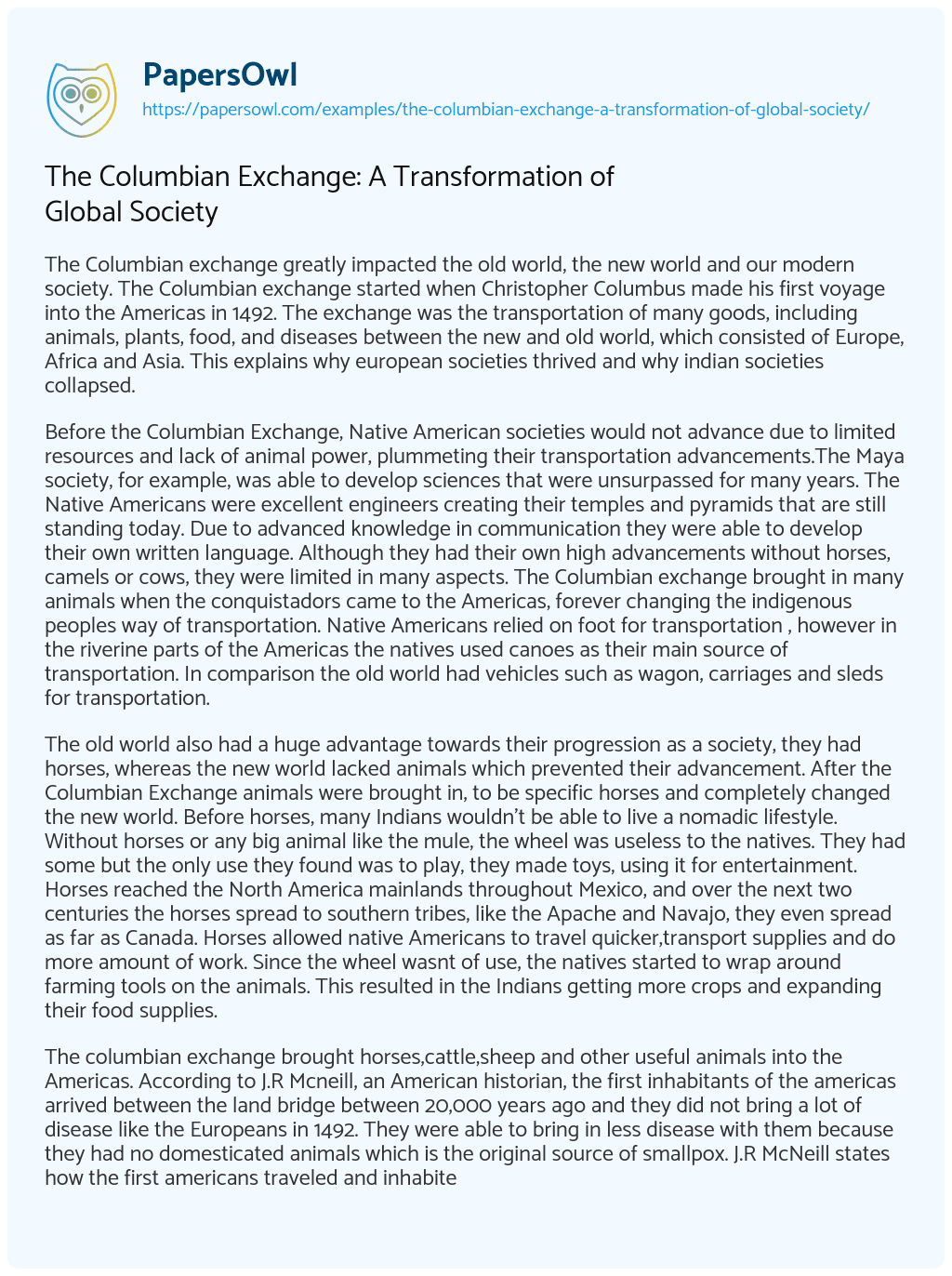 The Columbian exchange greatly impacted the old world, the new world and our modern society. The Columbian exchange started when Christopher Columbus made his first voyage into the Americas in 1492. The exchange was the transportation of many goods, including animals, plants, food, and diseases between the new and old world, which consisted of Europe, Africa and Asia. This explains why european societies thrived and why indian societies collapsed.

Before the Columbian Exchange, Native American societies would not advance due to limited resources and lack of animal power, plummeting their transportation advancements.The Maya society, for example, was able to develop sciences that were unsurpassed for many years. The Native Americans were excellent engineers creating their temples and pyramids that are still standing today. Due to advanced knowledge in communication they were able to develop their own written language. Although they had their own high advancements without horses, camels or cows, they were limited in many aspects. The Columbian exchange brought in many animals when the conquistadors came to the Americas, forever changing the indigenous peoples way of transportation. Native Americans relied on foot for transportation , however in the riverine parts of the Americas the natives used canoes as their main source of transportation. In comparison the old world had vehicles such as wagon, carriages and sleds for transportation.

The old world also had a huge advantage towards their progression as a society, they had horses, whereas the new world lacked animals which prevented their advancement. After the Columbian Exchange animals were brought in, to be specific horses and completely changed the new world. Before horses, many Indians wouldn’t be able to live a nomadic lifestyle. Without horses or any big animal like the mule, the wheel was useless to the natives. They had some but the only use they found was to play, they made toys, using it for entertainment. Horses reached the North America mainlands throughout Mexico, and over the next two centuries the horses spread to southern tribes, like the Apache and Navajo, they even spread as far as Canada. Horses allowed native Americans to travel quicker,transport supplies and do more amount of work. Since the wheel wasnt of use, the natives started to wrap around farming tools on the animals. This resulted in the Indians getting more crops and expanding their food supplies.

The columbian exchange brought horses,cattle,sheep and other useful animals into the Americas. According to J.R Mcneill, an American historian, the first inhabitants of the americas arrived between the land bridge between 20,000 years ago and they did not bring a lot of disease like the Europeans in 1492. They were able to bring in less disease with them because they had no domesticated animals which is the original source of smallpox. J.R McNeill states how the first americans traveled and inhabited in cold weather which eliminated the few diseases. In the short span of 192 to 1001 about 90% of the Indian population was deceased because they had no immunity to the disease europeans brought.

The native Americans received the worst part of the columbian exchange, it only brought them diseases and death, the ones that benefited the most were the Europeans. An immediate effect of the exchange was disease. The following diseases were brought by the Europeans, smallpox, measles, chickenpox, influence and cholera. Natives were not resistant to these diseases causing a great epidemic. This epidemic impacted indian societies in a negative way because it declined their population rapidly, making it easier for the Europeans to take over. For example in 1738 the Cherokee population was decimated in half, just by coming into contact with the europeans. In a matter of 2 years half the 250,000 Indians were dead.

Since Native Americans were not immune to these diseases and were dying rapidly, the Slave Trade became very successful due to the high demand for workers. The slave trade was the trade of enslaved Africans Americans to the Americas. The Europeans needed the African Americans because they were immune to diseases and were able to survive the harsh working conditions. Slavery was a huge devastation from the columbian exchange. Not only did the europeans bring slaves from Africa but also brought native americans to Europe. This brought in severe agony for Native Americans and African slaves because they would be separated from their families and would be tortured, many would die on the voyage to the Old world.

Allen Gathman reports how many African slaves were removed from their homes to be exploited for European benefit, “Between 1502 and 1867 more than 10 million African slaves were imported into the Americas. Roughly 4 million went to Brazil,1.7 million to what is now Hati, 1.7 million to the Spanish American colonies, 1.7 million to the British West Indies,600,000 to the United States and 500,000 to the Dutch colonies of Guyana and Suriname”. As Native Americans were dying from the diseases that the Europeans transported with them the Europeans took advantage of the situation as they were Conquering the Mayans Incas and Aztecs.From the natives that survived natives were forced to work in mines so the Spaniards could take gold and silver back home all the land that had once belonged to the natives was slowly being taken away from them.

Europeans benefited from the new world crops the Columbian exchange brought such as Corn, Cocoa Beans, potatoes, Tobacco, Chocolate, Gold and silver. All these foods helped in Europe’s population growth, as well as help improve the European diet, and feed the growing population of the old world, “three-fifths of the crops cultivated around the globe today originated in the Americas”. Potatoes especially helped improve the European diet, According to Darcie Adams a APUSH teacher “potatoes are full of complex carbs, which they were lacking in the Old world. The potatoes could give them those carbs and increase nutrition. They were easy to grow in different regions. They are not too temperamental since they are grown in the ground.As a result, farmers and people were able to produce a lot of it”. The New world was introduced to coffee,sugar cane, bananas, apples and wheat but The europeans would force the Indians to work for them.

The ones who did all the work by preparing the land and harvesting were the native americans, all these crops resulted in hard labor and the enslavement of native Americans in order to meet the demand. Columbus had “persuaded the king and queen of Spain to finance an expedition to the lands, the wealth, he expected would be on the other side of the Atlantic- the Indies and Asia, gold and spices”. Since the first day the Spanish Conquistadors arrived to the americas their mission was to look for gold and other riches.

The Columbian Exchange: A Transformation of Global Society. (2020, Sep 23). Retrieved from https://papersowl.com/examples/the-columbian-exchange-a-transformation-of-global-society/