The British Invasion: Immigration over the Centuries 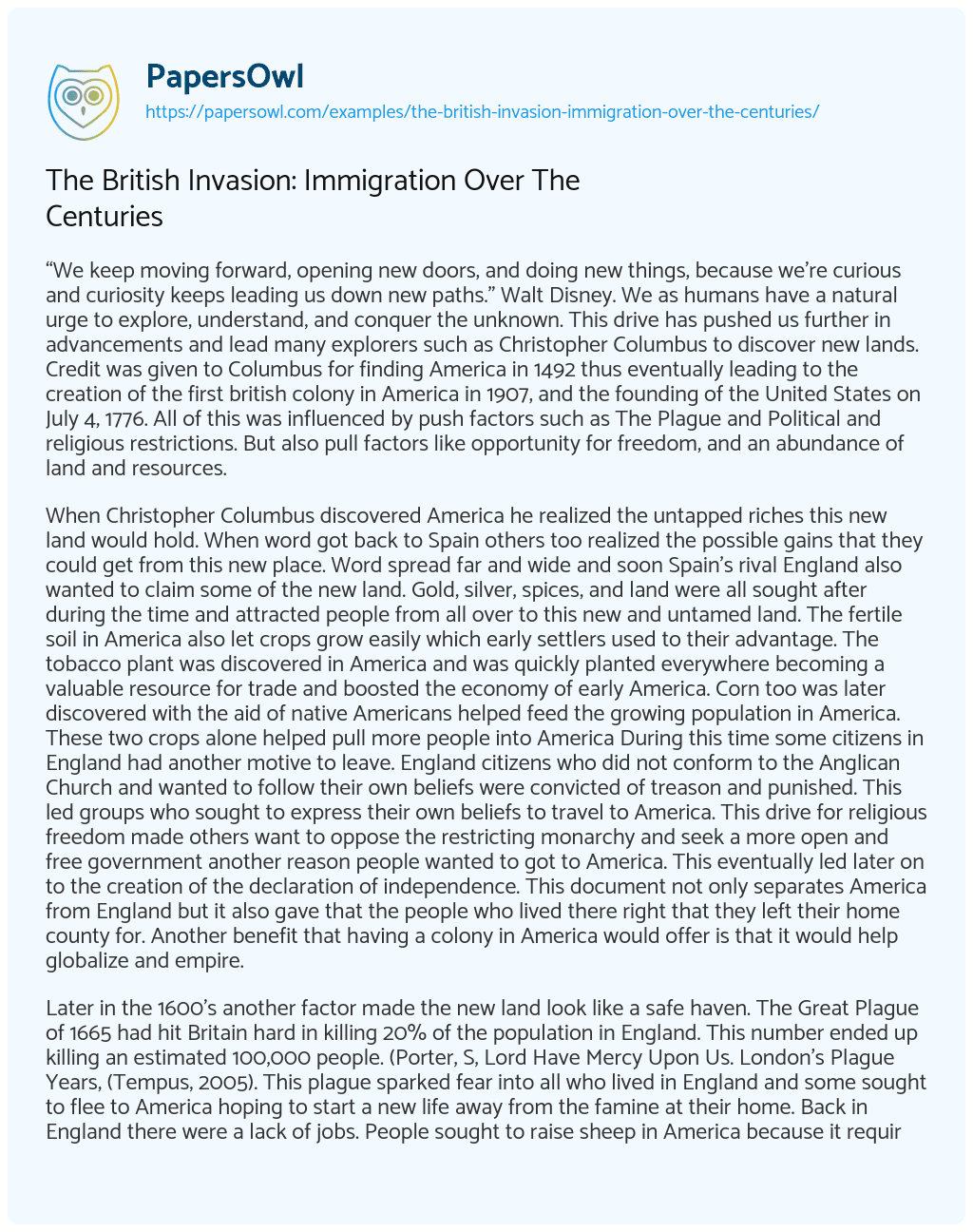 “We keep moving forward, opening new doors, and doing new things, because we’re curious and curiosity keeps leading us down new paths.” Walt Disney. We as humans have a natural urge to explore, understand, and conquer the unknown. This drive has pushed us further in advancements and lead many explorers such as Christopher Columbus to discover new lands. Credit was given to Columbus for finding America in 1492 thus eventually leading to the creation of the first british colony in America in 1907, and the founding of the United States on July 4, 1776. All of this was influenced by push factors such as The Plague and Political and religious restrictions. But also pull factors like opportunity for freedom, and an abundance of land and resources.

When Christopher Columbus discovered America he realized the untapped riches this new land would hold. When word got back to Spain others too realized the possible gains that they could get from this new place. Word spread far and wide and soon Spain’s rival England also wanted to claim some of the new land. Gold, silver, spices, and land were all sought after during the time and attracted people from all over to this new and untamed land. The fertile soil in America also let crops grow easily which early settlers used to their advantage. The tobacco plant was discovered in America and was quickly planted everywhere becoming a valuable resource for trade and boosted the economy of early America. Corn too was later discovered with the aid of native Americans helped feed the growing population in America. These two crops alone helped pull more people into America During this time some citizens in England had another motive to leave. England citizens who did not conform to the Anglican Church and wanted to follow their own beliefs were convicted of treason and punished. This led groups who sought to express their own beliefs to travel to America. This drive for religious freedom made others want to oppose the restricting monarchy and seek a more open and free government another reason people wanted to got to America. This eventually led later on to the creation of the declaration of independence. This document not only separates America from England but it also gave that the people who lived there right that they left their home county for. Another benefit that having a colony in America would offer is that it would help globalize and empire.

Later in the 1600’s another factor made the new land look like a safe haven. The Great Plague of 1665 had hit Britain hard in killing 20% of the population in England. This number ended up killing an estimated 100,000 people. (Porter, S, Lord Have Mercy Upon Us. London’s Plague Years, (Tempus, 2005). This plague sparked fear into all who lived in England and some sought to flee to America hoping to start a new life away from the famine at their home. Back in England there were a lack of jobs. People sought to raise sheep in America because it required less labor and paid more than typical agriculture and with the abundance of land there was plenty of land to raise them.The people who came not only brought their animals for farming but also their culture. Today 31.67% of all americans have British ancestry which would mean that 103.7 milion people have this ancestry. The puritans also left their religion in the here in the US now 23.9% of the population of the United States is Roman Catholic.

As you can see there are multiple push and pull factors that led people to emigrate to America. Altho advancements in technology have stopped problems like the plague there are till push in pull factors that continue to bring people to America whether that be for work, to offer their kids a better education or for a safer life people continue to come here.. So when dealing with the current issues we have with immigration today just keep in mind the people who built this country and made it what it is today originally emigrated to here for the same reasons people came here centuries ago.

The British Invasion: Immigration Over The Centuries. (2021, Apr 08). Retrieved from https://papersowl.com/examples/the-british-invasion-immigration-over-the-centuries/

Age of European Enlightment during the 18th to 19th Centuries