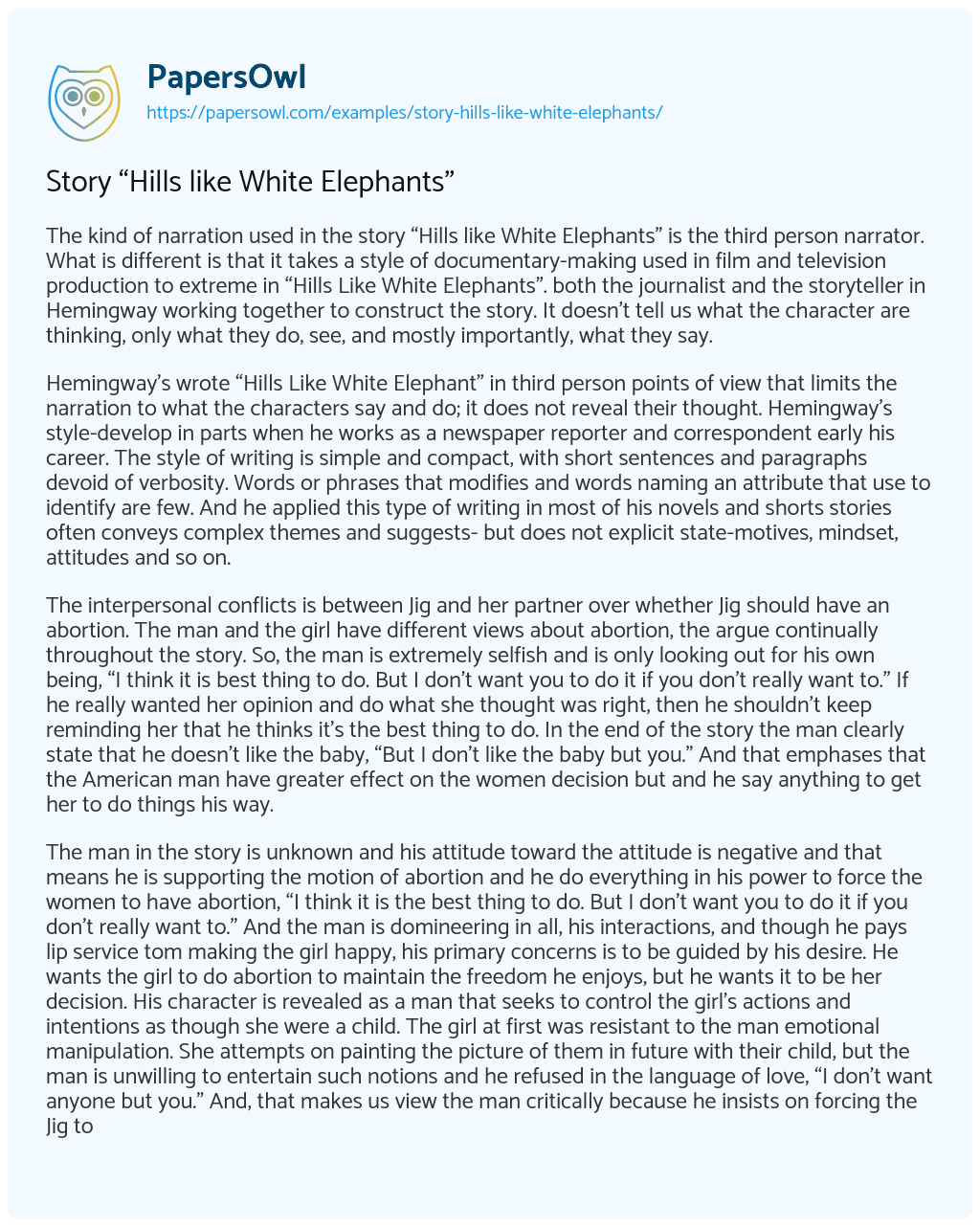 The kind of narration used in the story “Hills like White Elephants” is the third person narrator. What is different is that it takes a style of documentary-making used in film and television production to extreme in “Hills Like White Elephants”. both the journalist and the storyteller in Hemingway working together to construct the story. It doesn’t tell us what the character are thinking, only what they do, see, and mostly importantly, what they say.

Hemingway’s wrote “Hills Like White Elephant” in third person points of view that limits the narration to what the characters say and do; it does not reveal their thought. Hemingway’s style-develop in parts when he works as a newspaper reporter and correspondent early his career. The style of writing is simple and compact, with short sentences and paragraphs devoid of verbosity. Words or phrases that modifies and words naming an attribute that use to identify are few. And he applied this type of writing in most of his novels and shorts stories often conveys complex themes and suggests- but does not explicit state-motives, mindset, attitudes and so on.

The interpersonal conflicts is between Jig and her partner over whether Jig should have an abortion. The man and the girl have different views about abortion, the argue continually throughout the story. So, the man is extremely selfish and is only looking out for his own being, “I think it is best thing to do. But I don’t want you to do it if you don’t really want to.” If he really wanted her opinion and do what she thought was right, then he shouldn’t keep reminding her that he thinks it’s the best thing to do. In the end of the story the man clearly state that he doesn’t like the baby, “But I don’t like the baby but you.” And that emphases that the American man have greater effect on the women decision but and he say anything to get her to do things his way.

The man in the story is unknown and his attitude toward the attitude is negative and that means he is supporting the motion of abortion and he do everything in his power to force the women to have abortion, “I think it is the best thing to do. But I don’t want you to do it if you don’t really want to.” And the man is domineering in all, his interactions, and though he pays lip service tom making the girl happy, his primary concerns is to be guided by his desire. He wants the girl to do abortion to maintain the freedom he enjoys, but he wants it to be her decision. His character is revealed as a man that seeks to control the girl’s actions and intentions as though she were a child. The girl at first was resistant to the man emotional manipulation. She attempts on painting the picture of them in future with their child, but the man is unwilling to entertain such notions and he refused in the language of love, “I don’t want anyone but you.” And, that makes us view the man critically because he insists on forcing the Jig to have an abortion and ensuring her that it is safe. “And you think then we’ll be all right and be happy.” “I know we will. You don’t have to be afraid. I’ve known lots of people that have done it.” “So, have I,” And afterward they were all so happy.” And, that shows him as a character that is focused on himself than Jig. The American is insensitive toward Jig, which makes him as unsympathetic character because there is no guarantee that if Jig takes the decision to make abortion will survive and that simply means he don’t care about Jig’s healthy.

Jig concerns is that she had to choose between the American man and the baby. She also makes it clear that having abortion isn’t going to be a relief, it’s going to be a source of sadness. After all she says: “Then I’ll don’t care about me.”: (64) In the case of Jig marriage will equate happiness and abortion will not makes her happy whereas the American Abortion makes it clear that marriage isn’t his intention. Jig’s character is influenced by his lover. Jig’s faces with life changing event, abortion. The state of their relationship is not good, Jig think bringing a new life into the world is a long-time commitment and it is something she can treasure forever and can make them as a couple happy in future. I do not sympathise as a woman she has a right to do anything to do with her body and she must not do abortion because she wants to be loved but it must be her decision without anyone’s influenced.

In “His like white elephants” Ernest Hemingway doesn’t give us the straightforward information. Rather, he gives us some information by using symbols. According to the story white elephants represents a belly of a pregnant women. Hemingway describes the time and place which the story takes place “on this side there was no shade and no trees, and the station was between two lines of rails in the sun… the country was brown and dry”. Later, the other side of the train station is described when “the girl stood up and walked to the end of the station. Across, on the other side, were field of grain and trees along the banks of the Ebro. The shadow of a cloud moved across the field of grain and she saw the river through thee trees”.

The picture of the scenery give way to the indecision of the women on whether she will have the abortion or not. When they say the atmosphere is dry and unpromising it means the state of the relationship between the couple. And, also the train coming is a symbolic. The train goes one way. Once it comes, it goes. Symbolically, the train represents girl’s choice. Like the coming of the train, if she decides to abort the baby, there is no turning back.

The last line of the story “I feel fine. she said. ‘There’s nothing wrong with me. I feel Fine”. (109-110) The tone is on low level, this informs the reader that anything can happen at this point. Jig’s behaviour as an expression of incapable to action about the abortion she doesn’t want to have. On the other hand, she might be seeing the idea of pregnancy as wrong and keep the hint that she plans to keep the baby – whether they marry or not.

The two couple briefly discuss their future. By now the American’s attitude about the unborn child obviously annoys Jig. She shows her irritation when she says, “And you think then we’ll all right and be happy?” The she also does the rolling of the eyes to the sky. The American is completely oblivious to the meaning of that question, tosses the subject of their future aside and continues to discuss the operation. Jig is aware that her words are not making much of an impression on the American’s views, so she resorts to a bit of emotional blackmail. “What do you mean?” “I don’t care about me.” “Well, I care about you”. “Oh, yes. But I don’t care about me. And I’ll do it and then everything will be fine”. (96-100) By, the end of the story, I am certain that Jig will go through with the abortion. Her inability to communicate her feelings to the American leaves her frustrated and beaten. This is the evident when she says to him, “I’ll scream.” Jigs realizes that the American is too preoccupied with his own feelings to care at all about her.

Review on the Short Story Hills Like White Elephants