Societal Impacts of the American Revolution 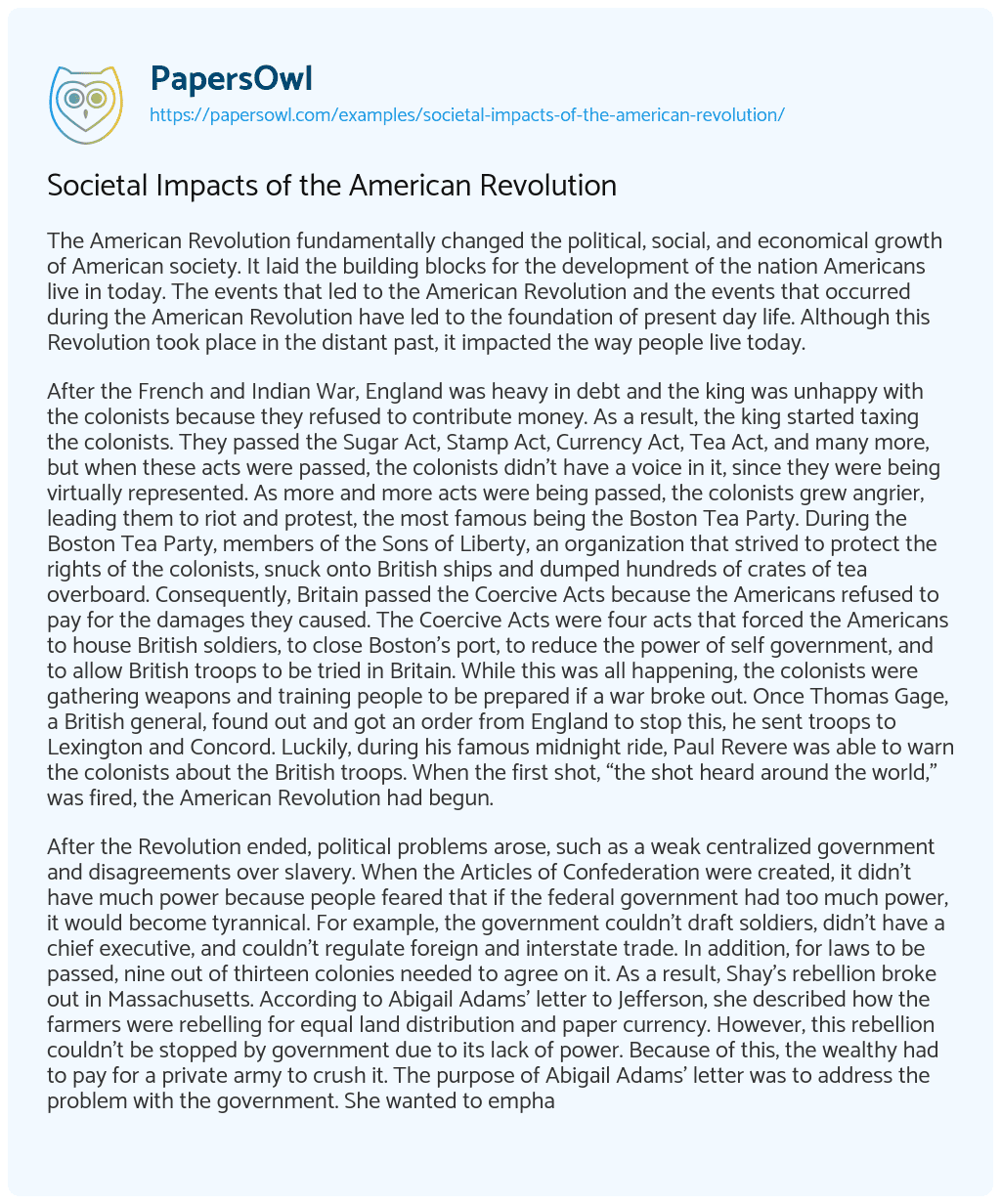 After the French and Indian War, England was heavy in debt and the king was unhappy with the colonists because they refused to contribute money. As a result, the king started taxing the colonists. They passed the Sugar Act, Stamp Act, Currency Act, Tea Act, and many more, but when these acts were passed, the colonists didn’t have a voice in it, since they were being virtually represented. As more and more acts were being passed, the colonists grew angrier, leading them to riot and protest, the most famous being the Boston Tea Party. During the Boston Tea Party, members of the Sons of Liberty, an organization that strived to protect the rights of the colonists, snuck onto British ships and dumped hundreds of crates of tea overboard. Consequently, Britain passed the Coercive Acts because the Americans refused to pay for the damages they caused. The Coercive Acts were four acts that forced the Americans to house British soldiers, to close Boston’s port, to reduce the power of self government, and to allow British troops to be tried in Britain. While this was all happening, the colonists were gathering weapons and training people to be prepared if a war broke out. Once Thomas Gage, a British general, found out and got an order from England to stop this, he sent troops to Lexington and Concord. Luckily, during his famous midnight ride, Paul Revere was able to warn the colonists about the British troops. When the first shot, “the shot heard around the world,” was fired, the American Revolution had begun.

After the Revolution ended, political problems arose, such as a weak centralized government and disagreements over slavery. When the Articles of Confederation were created, it didn’t have much power because people feared that if the federal government had too much power, it would become tyrannical. For example, the government couldn’t draft soldiers, didn’t have a chief executive, and couldn’t regulate foreign and interstate trade. In addition, for laws to be passed, nine out of thirteen colonies needed to agree on it. As a result, Shay’s rebellion broke out in Massachusetts. According to Abigail Adams’ letter to Jefferson, she described how the farmers were rebelling for equal land distribution and paper currency. However, this rebellion couldn’t be stopped by government due to its lack of power. Because of this, the wealthy had to pay for a private army to crush it. The purpose of Abigail Adams’ letter was to address the problem with the government. She wanted to emphasize the idea that the nation will turn into chaos if action wasn’t taken. Furthermore, as the North kept disagreeing with the South’s decision to keep slavery, the states were slowly being driven apart. According to An Ordinance for the Governance of the Northwest Territory of the United States, it stated that slavery was forbidden in the Northwest territory. The North wanted to ban slavery throughout the entire nation, but the South opposed this idea. As the Articles of Confederation were replaced by the Constitution, the topic of slavery was highly controversial. Therefore, the representatives of the South refused to sign the Constitution, unless slavery was permitted. The South fought on the idea that slavery should be included because their society, overall, was agricultural, so the South needed aid from the slaves for cultivation, unlike the North, where society was more based on commerce and slaves weren’t needed as much. The purpose of An Ordinance for the Governance of the Northwest Territory of the United States, was to bring forth the idea that slavery wasn’t allowed in the Northwest Ordinance unless the person committed a crime, which his/her punishment was to be a slave. Nonetheless, the overall message of the document was to state and emphasize that the idea of slavery was banned throughout the North unless there was a certain exception. The states were experiencing political problems after the revolution.

The American Revolution greatly influenced the societal views of the nation. For example, the colonists felt a strong sense of independence, banning those who posed as a threat to the nation’s freedom. According to the Pennsylvania Packet, all tories and loyalists should be banished from America and sent back to their home country, England. If these people wanted Britain to win and keep ruling over America, they didn’t deserve to live with the freedom and equality America has won. They deserve to suffer in Britain, where they are treated like slaves. In addition, the idea of freedom of religion was developed. According to Statutes at Large Virginia, 1786, all men are free to practice whatever religion they want and they shouldn’t forced to be practice religions they don’t believe in. Now, Americans won’t be persecuted for practicing a different religion than the state allows, like they would in England. Moreover, winning the war for independence led women to question the rights they had. Molly Wallace wondered why women couldn’t make public appearances and give public speeches. Since they have the right to read and write, they should also have the right to speak. Also, by appearing and speaking in public more frequently, women can improve their orating skills. They shouldn’t be discriminated against based on their sex or inexperience because by allowing them to do what they want, women can become more skillful and successful at it. Molly Wallace gave her valedictory address because she wanted to explain to everyone that women have the right to give public speeches, too. They deserve more rights because they are also human beings and shouldn’t deprived of any rights, just because they are women. Furthermore, during the Treaty of Paris, the Native Americans weren’t included, making them feel disappointed and left out. During the speech at the Confederate Council, the Indians explained that they wanted to be a part of the peace and friendship, America was promoting. As a result, tensions grew between the Native Americans and colonists, which causes the colonists to become more hostile towards the Natives and force them off their land. The speech was directed towards the Americans because the Indians wanted to explain to the Americans that they were willing to be friends. If the colonists wanted more land, they could agree peacefully with the Indians, instead of forcefully taking their land or engaging in war. The war for independence lead to changes in the society, both positive and negative.

The war resulted in many financial problems; the Bank of the United States was created and an emphasis was placed on the significance of farming to improve the economy and pay off the debt. America owed 54 million dollars to U.S. bondholders and other nations. Since the federal government was too weak, it couldn’t raise taxes in the states to earn money to pay off that debt. As a result, Alexander Hamilton came up with the idea of assuming the debt and establishing a national bank, the Bank of the United States. Therefore, the national government would take care of the debt slowly, so citizens and foreign nations would remain interested in the prosperity of America. The Bank would help with the war debt and provide a standard form of currency. In addition, Jefferson emphasized the importance of having an agrarian economy. In the letters to John Jay, Jefferson claimed that there was enough land for cultivation. Now that they don’t have to follow the orders of the Proclamation of 1763, the colonists can move out west, where there’s more land for them to plant crops. Farming also provides the colonists with jobs, making them the most virtuous, independent, and vigorous people in the nation. As a result of farming, jobs were created and food was grown, which improves the economy, making it more prosperous. The revolution had a great impact on the economy of America.

The colonies of America were ruled over by the King of Britain. As a debt was accumulated from the French and Indian War, the king decided to tax the colonies to help pay for it. As a result, the Americans grew tired and angry at the king for oppressing the colonists and ignoring what they wanted. It led to creation of the Declaration of Independence, which was influenced by enlightenment ideas, and the American Revolution, where the colonists fought to gain independence and freedom from the tyrannical king of Britain. Similarly, the people of France fought in the French Revolution, which was inspired by the American Revolution, because the third estate wanted to overthrow the absolute monarchy and the king. The commoners were unfairly represented in the government since the entire estate, the majority, only had one vote and the first and second estate would always vote against the third estate. In addition, their living conditions were terrible and they had to pay high taxes, due to the lavish spendings of the king. Furthermore, the enlightenment ideas of writers, such as John Locke and Montesquieu, pushed the people to overthrow the king and establish a democracy instead, since everyone would be free and equal. Both nations fought a revolution to overthrow the king to gain independence and freedom.

Societal Impacts of the American Revolution. (2021, Mar 20). Retrieved from https://papersowl.com/examples/societal-impacts-of-the-american-revolution/