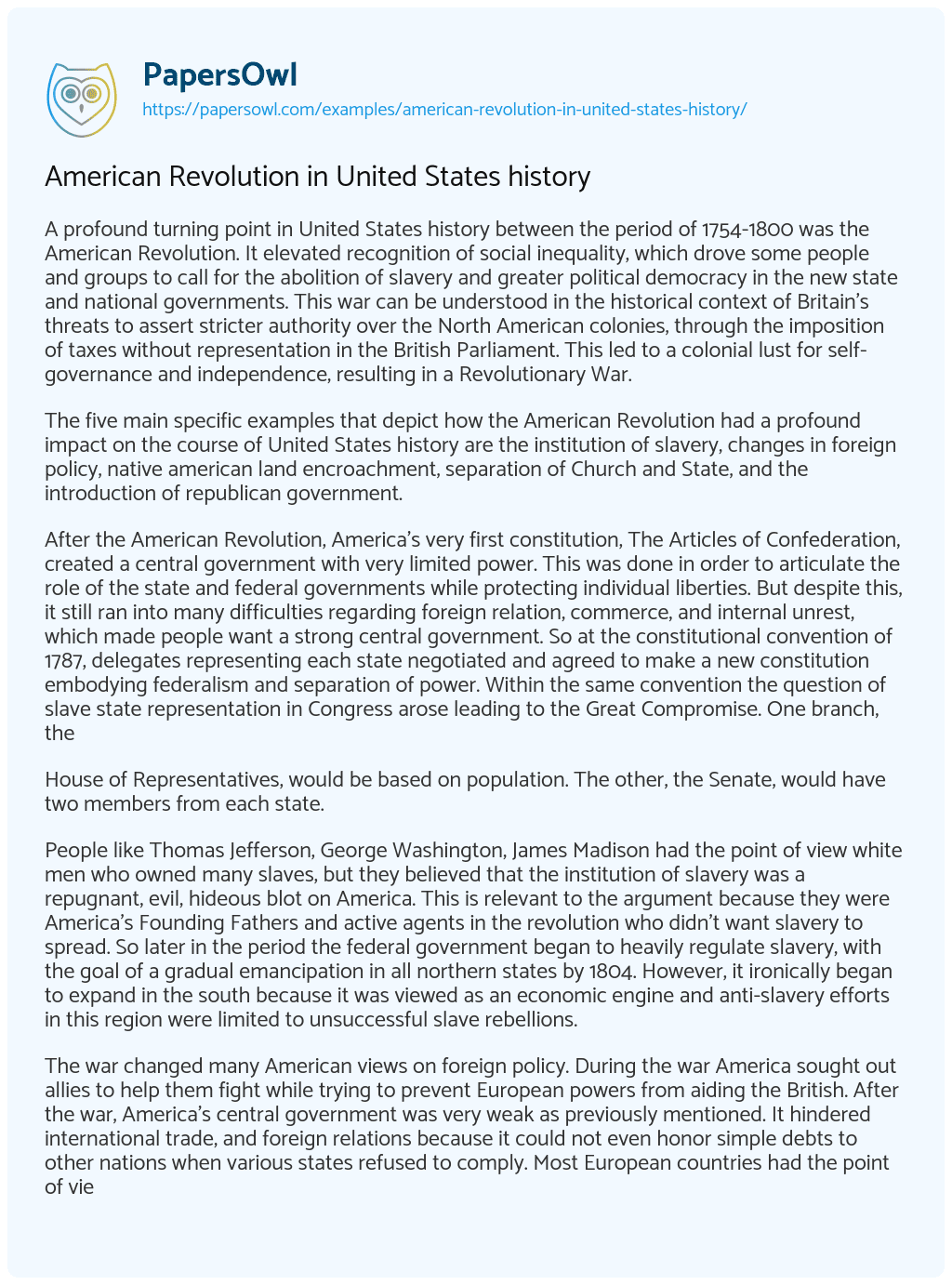 A profound turning point in United States history between the period of 1754-1800 was the American Revolution. It elevated recognition of social inequality, which drove some people and groups to call for the abolition of slavery and greater political democracy in the new state and national governments. This war can be understood in the historical context of Britain’s threats to assert stricter authority over the North American colonies, through the imposition of taxes without representation in the British Parliament. This led to a colonial lust for self-governance and independence, resulting in a Revolutionary War.

The five main specific examples that depict how the American Revolution had a profound impact on the course of United States history are the institution of slavery, changes in foreign policy, native american land encroachment, separation of Church and State, and the introduction of republican government.

After the American Revolution, America’s very first constitution, The Articles of Confederation, created a central government with very limited power. This was done in order to articulate the role of the state and federal governments while protecting individual liberties. But despite this, it still ran into many difficulties regarding foreign relation, commerce, and internal unrest, which made people want a strong central government. So at the constitutional convention of 1787, delegates representing each state negotiated and agreed to make a new constitution embodying federalism and separation of power. Within the same convention the question of slave state representation in Congress arose leading to the Great Compromise. One branch, the

House of Representatives, would be based on population. The other, the Senate, would have two members from each state.

People like Thomas Jefferson, George Washington, James Madison had the point of view white men who owned many slaves, but they believed that the institution of slavery was a repugnant, evil, hideous blot on America. This is relevant to the argument because they were America’s Founding Fathers and active agents in the revolution who didn’t want slavery to spread. So later in the period the federal government began to heavily regulate slavery, with the goal of a gradual emancipation in all northern states by 1804. However, it ironically began to expand in the south because it was viewed as an economic engine and anti-slavery efforts in this region were limited to unsuccessful slave rebellions.

The war changed many American views on foreign policy. During the war America sought out allies to help them fight while trying to prevent European powers from aiding the British. After the war, America’s central government was very weak as previously mentioned. It hindered international trade, and foreign relations because it could not even honor simple debts to other nations when various states refused to comply. Most European countries had the point of view of autocratic governments so they often criticized the concept of democracy.
America’s most important foreign relation during this period was with France. The Treaty of Alliance, made the United States and France allies against Great Britain in the Revolutionary War. The French decided to back the U.S. in its military efforts until it had full independence from Great Britain. Its independence later inspired the French revolution which led it to the construction of its democratic institutions. However the violence and instability resulting from the revolution eventually divided American officials between pro and anti-French sentiment.

Eventually President John Adams broke ties with the French and came close to war. The tensions resulted in the election of the pro-French Thomas Jefferson, who re-established a firm peace.

Native American participation in the Revolutionary War quiet neutral. This is obviously because they had issues of their own. They were actively trying to avoiding land encroachment, and maintain resources through trading. So many natives decided to fight in the war, but not for any particular side. When the war ended, many Americans thought that the Indians supported Britain’s monarchy and tyranny, resulting in disposition and expulsion of those who had opposed her birth. The point of view of the native americans was that of a suppressed, defensive people. This is relevant to the argument because indian land encroachment became a massive continuity in American history.

The Church viewed the American Revolution as a type of Holy War. This gave many people a moral sanction in the war, by preaching against tyranny. Ministers often gave soldiers food and supplies, acting as military chaplains during the war. However, after the war many people such as James Madison and Thomas Jefferson argued against any relations between the Church and State because, having the point of view of Founding Fathers, they did not want to infringe on any individual’s conscience as the British once did to them. So in the constitution, the first amendment prevents the government from officially recognizing or favoring any religion.

The American Revolution and the United States of America