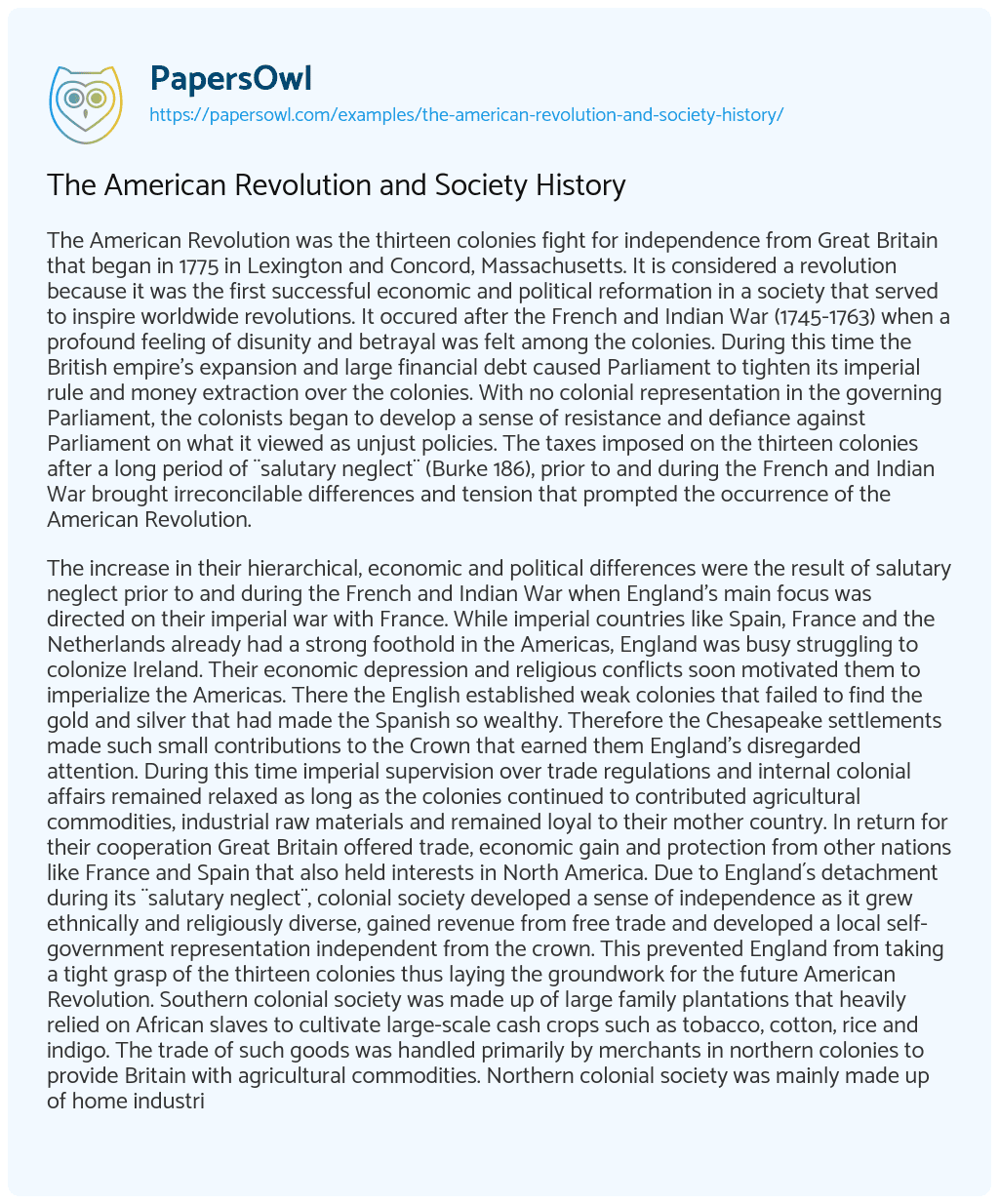 The American Revolution was the thirteen colonies fight for independence from Great Britain that began in 1775 in Lexington and Concord, Massachusetts. It is considered a revolution because it was the first successful economic and political reformation in a society that served to inspire worldwide revolutions. It occured after the French and Indian War (1745-1763) when a profound feeling of disunity and betrayal was felt among the colonies. During this time the British empire’s expansion and large financial debt caused Parliament to tighten its imperial rule and money extraction over the colonies. With no colonial representation in the governing Parliament, the colonists began to develop a sense of resistance and defiance against Parliament on what it viewed as unjust policies. The taxes imposed on the thirteen colonies after a long period of ¨salutary neglect¨ (Burke 186), prior to and during the French and Indian War brought irreconcilable differences and tension that prompted the occurrence of the American Revolution.

The increase in their hierarchical, economic and political differences were the result of salutary neglect prior to and during the French and Indian War when England’s main focus was directed on their imperial war with France. While imperial countries like Spain, France and the Netherlands already had a strong foothold in the Americas, England was busy struggling to colonize Ireland. Their economic depression and religious conflicts soon motivated them to imperialize the Americas. There the English established weak colonies that failed to find the gold and silver that had made the Spanish so wealthy. Therefore the Chesapeake settlements made such small contributions to the Crown that earned them England’s disregarded attention. During this time imperial supervision over trade regulations and internal colonial affairs remained relaxed as long as the colonies continued to contributed agricultural commodities, industrial raw materials and remained loyal to their mother country. In return for their cooperation Great Britain offered trade, economic gain and protection from other nations like France and Spain that also held interests in North America. Due to England´s detachment during its ¨salutary neglect¨, colonial society developed a sense of independence as it grew ethnically and religiously diverse, gained revenue from free trade and developed a local self-government representation independent from the crown. This prevented England from taking a tight grasp of the thirteen colonies thus laying the groundwork for the future American Revolution. Southern colonial society was made up of large family plantations that heavily relied on African slaves to cultivate large-scale cash crops such as tobacco, cotton, rice and indigo. The trade of such goods was handled primarily by merchants in northern colonies to provide Britain with agricultural commodities. Northern colonial society was mainly made up of home industries with a developing and thriving commercial class. The northern colonists there traded industrial raw materials in exchange for manufactured goods from England.

During the French and Indian War, despite being on the same side, tension between the colonies and Great Britain had already begun. The colonists firmly resisted the impressment of colonists and the order to shelter and provide for British soldiers without compensation. After the victory in the French and Indian War, Great Britain was left in great debt and turned to the colonists for financial relief. Parliament first began establishing authority by reinstalling the Navigation Acts, which had been a government trade regulation that had been passed more than a century before but had rarely been enforced.

The American Revolution and Society History. (2019, Oct 02). Retrieved from https://papersowl.com/examples/the-american-revolution-and-society-history/

Why was the American Revolution a Conservative Movement?