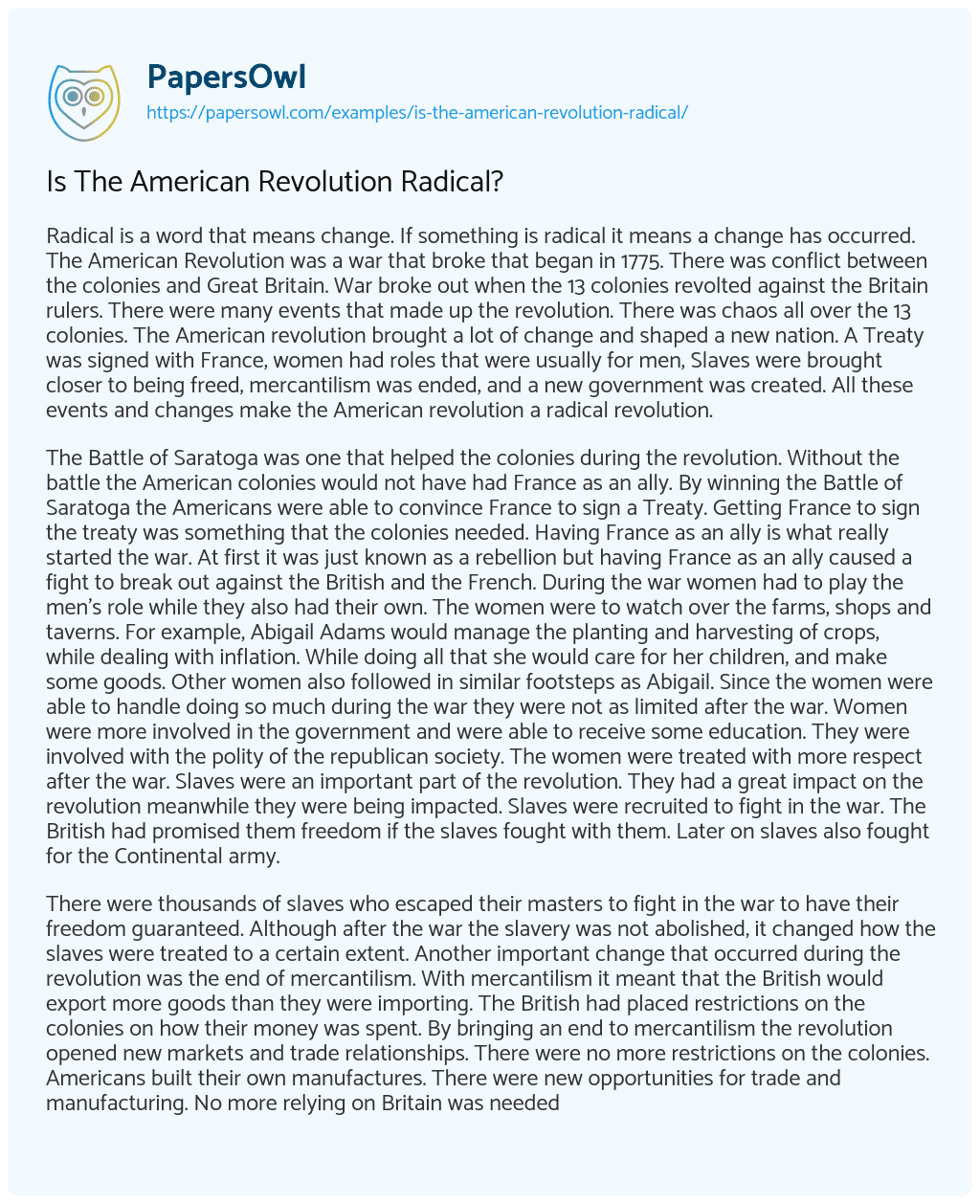 Radical is a word that means change. If something is radical it means a change has occurred. The American Revolution was a war that broke that began in 1775. There was conflict between the colonies and Great Britain. War broke out when the 13 colonies revolted against the Britain rulers. There were many events that made up the revolution. There was chaos all over the 13 colonies. The American revolution brought a lot of change and shaped a new nation. A Treaty was signed with France, women had roles that were usually for men, Slaves were brought closer to being freed, mercantilism was ended, and a new government was created. All these events and changes make the American revolution a radical revolution.

The Battle of Saratoga was one that helped the colonies during the revolution. Without the battle the American colonies would not have had France as an ally. By winning the Battle of Saratoga the Americans were able to convince France to sign a Treaty. Getting France to sign the treaty was something that the colonies needed. Having France as an ally is what really started the war. At first it was just known as a rebellion but having France as an ally caused a fight to break out against the British and the French. During the war women had to play the men’s role while they also had their own. The women were to watch over the farms, shops and taverns. For example, Abigail Adams would manage the planting and harvesting of crops, while dealing with inflation. While doing all that she would care for her children, and make some goods. Other women also followed in similar footsteps as Abigail. Since the women were able to handle doing so much during the war they were not as limited after the war. Women were more involved in the government and were able to receive some education. They were involved with the polity of the republican society. The women were treated with more respect after the war. Slaves were an important part of the revolution. They had a great impact on the revolution meanwhile they were being impacted. Slaves were recruited to fight in the war. The British had promised them freedom if the slaves fought with them. Later on slaves also fought for the Continental army.

There were thousands of slaves who escaped their masters to fight in the war to have their freedom guaranteed. Although after the war the slavery was not abolished, it changed how the slaves were treated to a certain extent. Another important change that occurred during the revolution was the end of mercantilism. With mercantilism it meant that the British would export more goods than they were importing. The British had placed restrictions on the colonies on how their money was spent. By bringing an end to mercantilism the revolution opened new markets and trade relationships. There were no more restrictions on the colonies. Americans built their own manufactures. There were new opportunities for trade and manufacturing. No more relying on Britain was needed. The colonies were able to maintain good economics without their help. The end of mercantilism was a definite plus for the colonies. Finally, one of the most important changes that occurred during the American revolution was the creation of a new government. A democratic government was created. The government was split between a federal government and a state government, although the federal government has more power. Within the government there was separation of powers, the power was separated into three branches. The branches are the Legislative branch, executive branch, and the Judicial branch. Also, the ratification of the Articles of Confederation in 1781 and the Constitution in 1787 occurred. The government became more civil and about the people.

Is The American Revolution Radical?. (2019, Feb 08). Retrieved from https://papersowl.com/examples/is-the-american-revolution-radical/