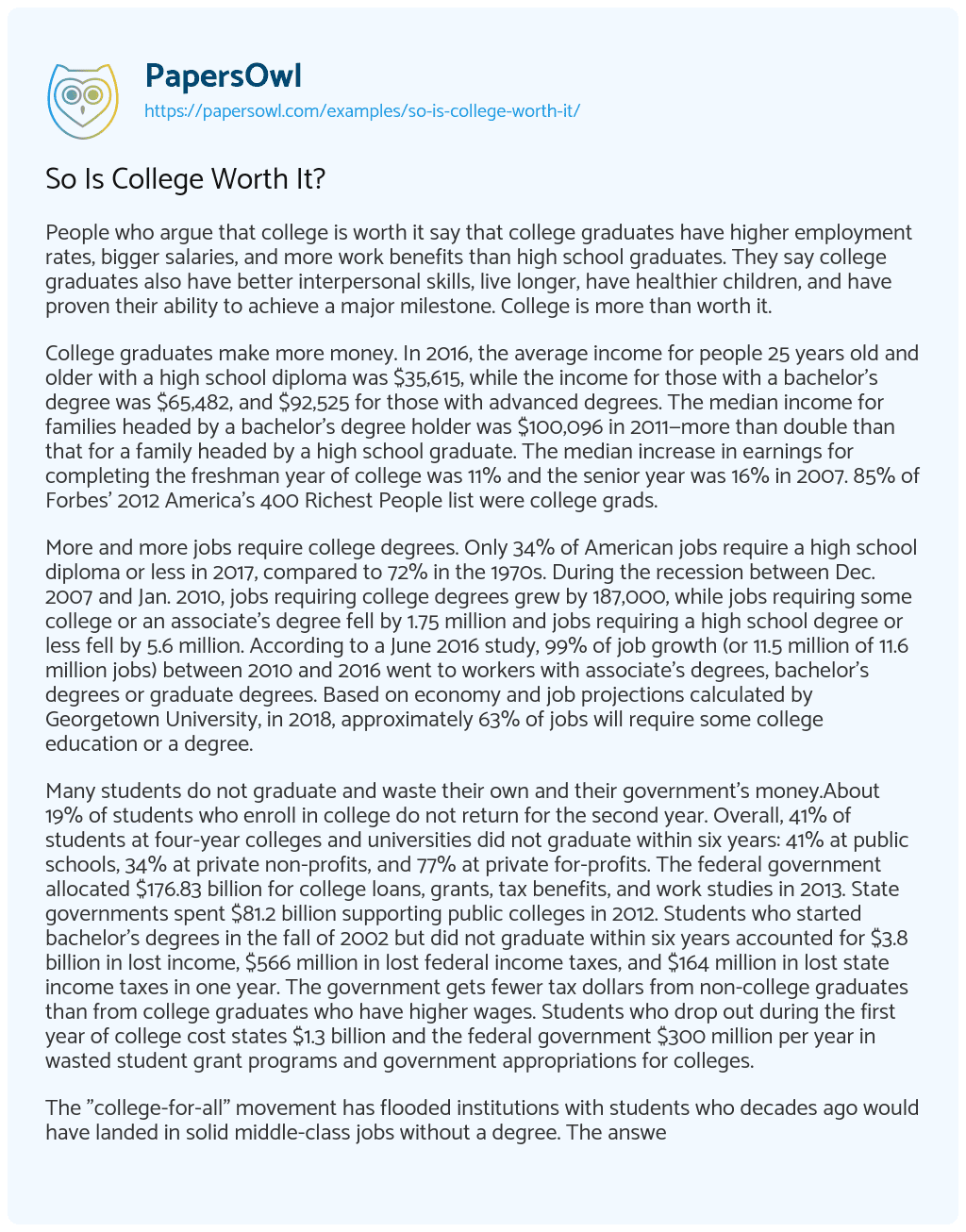 People who argue that college is worth it say that college graduates have higher employment rates, bigger salaries, and more work benefits than high school graduates. They say college graduates also have better interpersonal skills, live longer, have healthier children, and have proven their ability to achieve a major milestone. College is more than worth it.

College graduates make more money. In 2016, the average income for people 25 years old and older with a high school diploma was $35,615, while the income for those with a bachelor’s degree was $65,482, and $92,525 for those with advanced degrees. The median income for families headed by a bachelor’s degree holder was $100,096 in 2011—more than double than that for a family headed by a high school graduate. The median increase in earnings for completing the freshman year of college was 11% and the senior year was 16% in 2007. 85% of Forbes’ 2012 America’s 400 Richest People list were college grads.

More and more jobs require college degrees. Only 34% of American jobs require a high school diploma or less in 2017, compared to 72% in the 1970s. During the recession between Dec. 2007 and Jan. 2010, jobs requiring college degrees grew by 187,000, while jobs requiring some college or an associate’s degree fell by 1.75 million and jobs requiring a high school degree or less fell by 5.6 million. According to a June 2016 study, 99% of job growth (or 11.5 million of 11.6 million jobs) between 2010 and 2016 went to workers with associate’s degrees, bachelor’s degrees or graduate degrees. Based on economy and job projections calculated by Georgetown University, in 2018, approximately 63% of jobs will require some college education or a degree.

Many students do not graduate and waste their own and their government’s money.About 19% of students who enroll in college do not return for the second year. Overall, 41% of students at four-year colleges and universities did not graduate within six years: 41% at public schools, 34% at private non-profits, and 77% at private for-profits. The federal government allocated $176.83 billion for college loans, grants, tax benefits, and work studies in 2013. State governments spent $81.2 billion supporting public colleges in 2012. Students who started bachelor’s degrees in the fall of 2002 but did not graduate within six years accounted for $3.8 billion in lost income, $566 million in lost federal income taxes, and $164 million in lost state income taxes in one year. The government gets fewer tax dollars from non-college graduates than from college graduates who have higher wages. Students who drop out during the first year of college cost states $1.3 billion and the federal government $300 million per year in wasted student grant programs and government appropriations for colleges.

The “college-for-all” movement has flooded institutions with students who decades ago would have landed in solid middle-class jobs without a degree. The answer to the simple question of whether a college degree is worth it is certainly more nuanced today than it was in the 1980s. It’s no longer the guarantee to a good life it once was: plenty of students are following the advice of their parents and counselors, getting a degree, and still failing to successfully launch into the job market of this new economy.

So Is College Worth It?. (2019, Feb 12). Retrieved from https://papersowl.com/examples/so-is-college-worth-it/

Is College Really Worth the Hassle?