Is College Really Worth the Hassle? 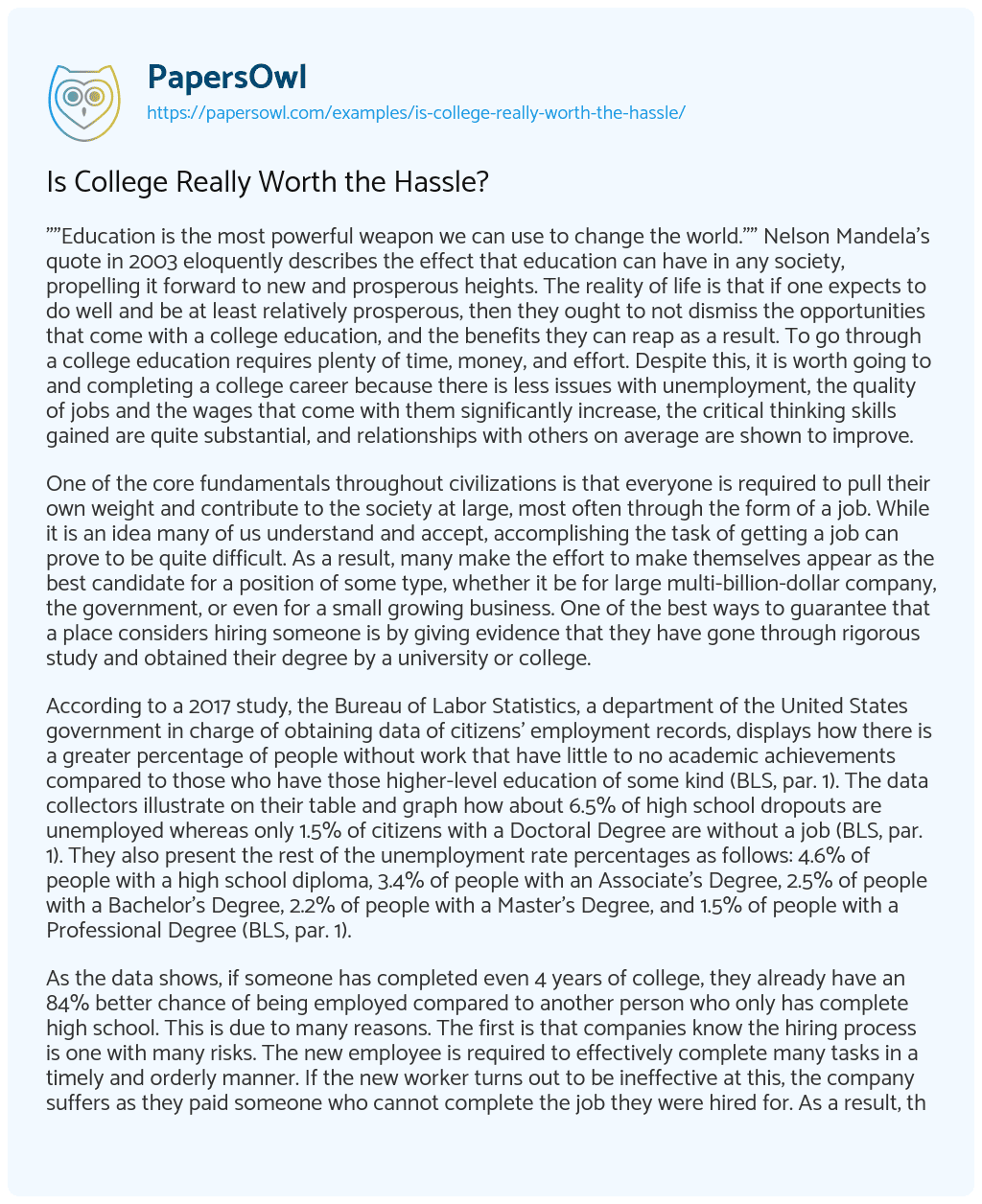 “”Education is the most powerful weapon we can use to change the world.”” Nelson Mandela’s quote in 2003 eloquently describes the effect that education can have in any society, propelling it forward to new and prosperous heights. The reality of life is that if one expects to do well and be at least relatively prosperous, then they ought to not dismiss the opportunities that come with a college education, and the benefits they can reap as a result. To go through a college education requires plenty of time, money, and effort. Despite this, it is worth going to and completing a college career because there is less issues with unemployment, the quality of jobs and the wages that come with them significantly increase, the critical thinking skills gained are quite substantial, and relationships with others on average are shown to improve.

One of the core fundamentals throughout civilizations is that everyone is required to pull their own weight and contribute to the society at large, most often through the form of a job. While it is an idea many of us understand and accept, accomplishing the task of getting a job can prove to be quite difficult. As a result, many make the effort to make themselves appear as the best candidate for a position of some type, whether it be for large multi-billion-dollar company, the government, or even for a small growing business. One of the best ways to guarantee that a place considers hiring someone is by giving evidence that they have gone through rigorous study and obtained their degree by a university or college.

As the data shows, if someone has completed even 4 years of college, they already have an 84% better chance of being employed compared to another person who only has complete high school. This is due to many reasons. The first is that companies know the hiring process is one with many risks. The new employee is required to effectively complete many tasks in a timely and orderly manner. If the new worker turns out to be ineffective at this, the company suffers as they paid someone who cannot complete the job they were hired for. As a result, they look for those with the knowledge and experience needed, and people with a college degree often are best for the job. Not only are college graduates taught and trained in a specific field that is required for a particular job, but they also have experience that those with no form of higher and formal education have, such as working with others on group tasks or assessing the problem and solution when little information or instruction is given. While it is possible that some people can acquire those skills outside of a college or university, an institution looking for new workers trusts more those who have spent years studying to apply in their field of work.

Not only are college graduates more likely to be employed over people without a degree, but college graduates are also more likely to have a better quality and higher paying job compared to those lacking one. According to the report “”The Rising Costs of Not Going to College,”” Paul Taylor et al., analysts at the Pew Research Center, detail how in 2012, people with at least a Bachelor’s degree made on average 45,000 dollars a year, and High School Graduates made on average 28,000 dollars a year (Taylor et al. 3). The authors go on to explain how the difference in average earnings between high school graduates and those with higher level education has grown in the past few decades. They lay out how in 1979, a worker with no degree on average made 77% of the amount as someone with a degree whereas by 2013, that number dropped to 62% (Taylor et al. 5).

The monetary benefits gained by obtaining a college degree are no doubt quite substantial and prove that going to college is a worthy cause from an economic standpoint. The fact of the matter is that the costs of living are constantly on the rise. In a first world country such as the United States, there are many expenses that need to be covered. These range from large and important ones such as mortgages, loans, insurances, and utility bills, to smaller ones such as food (whether that be from the store or from restaurants) or gas bills. And the truth of the matter is that no matter your academic or career path, these costs affect everyone. As a result, it is better to obtain a job that can offers the financial stability needed to live in this economic landscape. While there is no shame in taking a job that pays less and is considered of lower quality, the fact of the matter is that if there is an opportunity to have a much more stable life by means of a college education, the best decision one can make is to go down that path.

Despite these advantages brought by getting a college education, many believe that a college education is no longer worth it due to a variety of reasons. One of the main reasons brought up are that the financial burdens a graduate receives from accumulated debt often do not go away and cause problems for years. In recent years, it is true that college costs have risen by quite considerable amounts. In the article “”Rising Cost of College Creating a Financial Hole for parents, students: Foolish Take,”” Dan Caplinger, a writer for the Motley Fool and author of the article, explains that “”[o]ver the past 10 years, the average price for tuitions and fees… has jumped to $34,740 a year, up more than $7,000″” (Caplinger, par. 2). While there is no denying the empirical data, there are many factors that go into college tuition and as a result, it is not impossible to lower the costs of tuition for many. Many scholarship and grant programs exist for those who decide to apply to them which can give what is essentially free money for college costs, ranging from just enough to buy a book to full-ride scholarships. If grants and scholarships are not obtainable, there are other methods. One of the best involves going to a lower cost community college where many credits can be obtained for a fraction of the price compared to a university. With that, it is quite easy to then transfer to another school and complete the necessary courses and obtain a degree. Finally, a student can always work at a simple job to help cover costs during school which in turn help to lower debt. With all these solutions together, it is possible to obtain a valuable degree with little to no debt. While the solutions are not easy and simple, they no doubt make the case for a college education more viable for many as the cost to entry is lowered by a considerable amount.

Even when a graduate gets out of college with their degree and goes out into the working environment, competition proves to be a big obstacle, making it hard for someone to get their dream job. Couple that with an unstable and ever-changing economy and it makes the situation worse. As a result of all this, some argue that the value of college has diminished due to the fact that college graduates are no longer as successful coming out of school as compared to their peers from previous decades. Truth be told, there is evidence that points to this argument. In the journal report “”Are Recent College Graduates Find Good Jobs?”” by Jaison R. Abel et al., the researchers of the article report that not only did college graduates experience higher unemployment rates during the late 2000’s recession, but that college graduates of the Millennial generation have experienced higher levels of “”underemployment,”” that being jobs that these workers are considered over-qualified (Abel et al. 2,3). In looking at this data, it is important not to take it out of perspective. One of the cold hard realities of life is that when economic disasters occur, nearly everyone is affected, from the highest paid real-estate tycoon to the part time worker at a fast food restaurant. Within this range of course falls both the high-school only graduate and the college graduate.

Is College Really Worth the Hassle?. (2019, Apr 19). Retrieved from https://papersowl.com/examples/is-college-really-worth-the-hassle/