Roosevelt, the Great Depression, and the Economics of Recovery 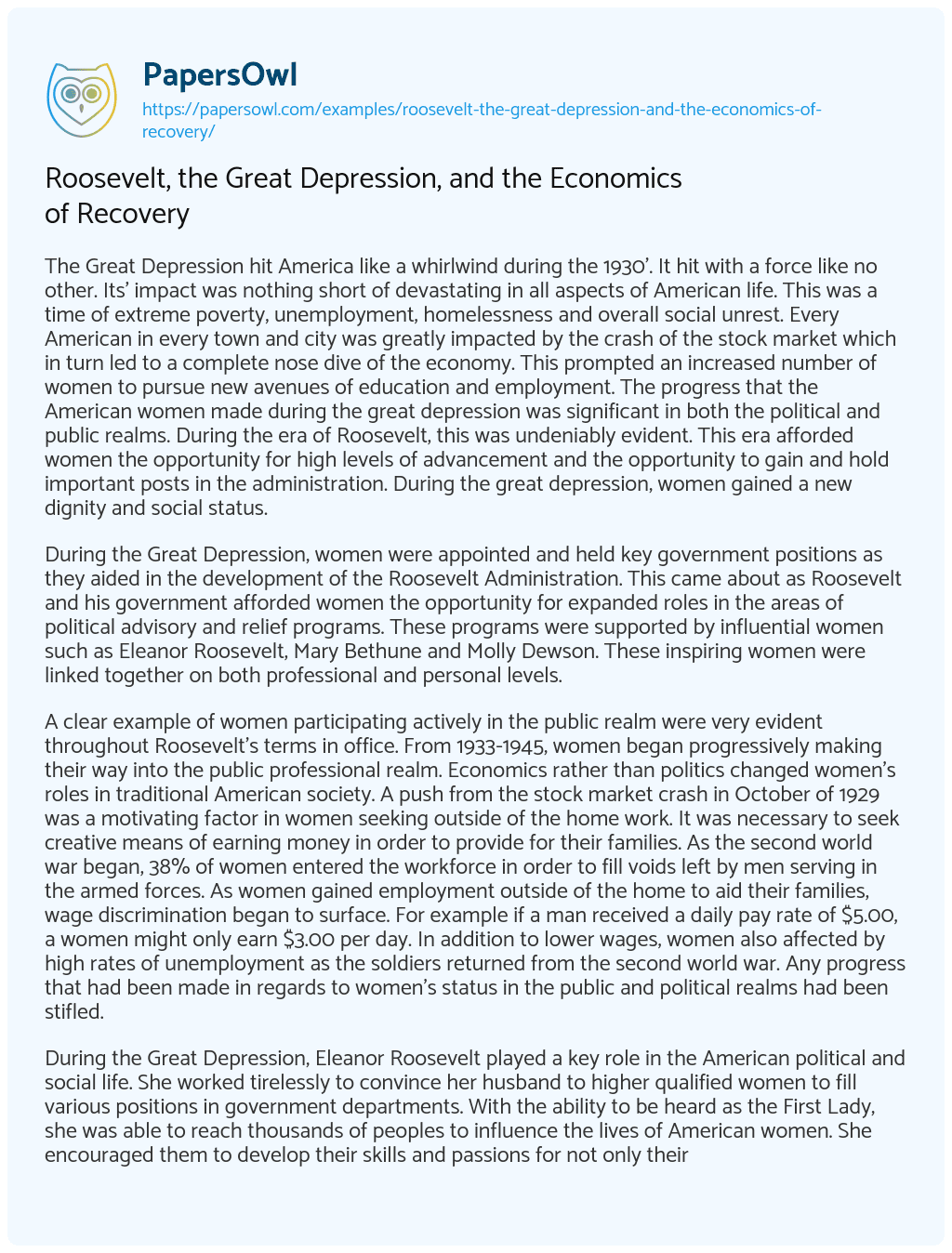 The Great Depression hit America like a whirlwind during the 1930′. It hit with a force like no other. Its’ impact was nothing short of devastating in all aspects of American life. This was a time of extreme poverty, unemployment, homelessness and overall social unrest. Every American in every town and city was greatly impacted by the crash of the stock market which in turn led to a complete nose dive of the economy. This prompted an increased number of women to pursue new avenues of education and employment. The progress that the American women made during the great depression was significant in both the political and public realms. During the era of Roosevelt, this was undeniably evident. This era afforded women the opportunity for high levels of advancement and the opportunity to gain and hold important posts in the administration. During the great depression, women gained a new dignity and social status.

During the Great Depression, women were appointed and held key government positions as they aided in the development of the Roosevelt Administration. This came about as Roosevelt and his government afforded women the opportunity for expanded roles in the areas of political advisory and relief programs. These programs were supported by influential women such as Eleanor Roosevelt, Mary Bethune and Molly Dewson. These inspiring women were linked together on both professional and personal levels.

A clear example of women participating actively in the public realm were very evident throughout Roosevelt’s terms in office. From 1933-1945, women began progressively making their way into the public professional realm. Economics rather than politics changed women’s roles in traditional American society. A push from the stock market crash in October of 1929 was a motivating factor in women seeking outside of the home work. It was necessary to seek creative means of earning money in order to provide for their families. As the second world war began, 38% of women entered the workforce in order to fill voids left by men serving in the armed forces. As women gained employment outside of the home to aid their families, wage discrimination began to surface. For example if a man received a daily pay rate of $5.00, a women might only earn $3.00 per day. In addition to lower wages, women also affected by high rates of unemployment as the soldiers returned from the second world war. Any progress that had been made in regards to women’s status in the public and political realms had been stifled.

During the Great Depression, Eleanor Roosevelt played a key role in the American political and social life. She worked tirelessly to convince her husband to higher qualified women to fill various positions in government departments. With the ability to be heard as the First Lady, she was able to reach thousands of peoples to influence the lives of American women. She encouraged them to develop their skills and passions for not only their personal satisfaction but also for the good of the nation.

Roosevelt, the Great Depression, and the Economics of Recovery. (2020, Mar 26). Retrieved from https://papersowl.com/examples/roosevelt-the-great-depression-and-the-economics-of-recovery/

Economic Recovery in the Great Depression