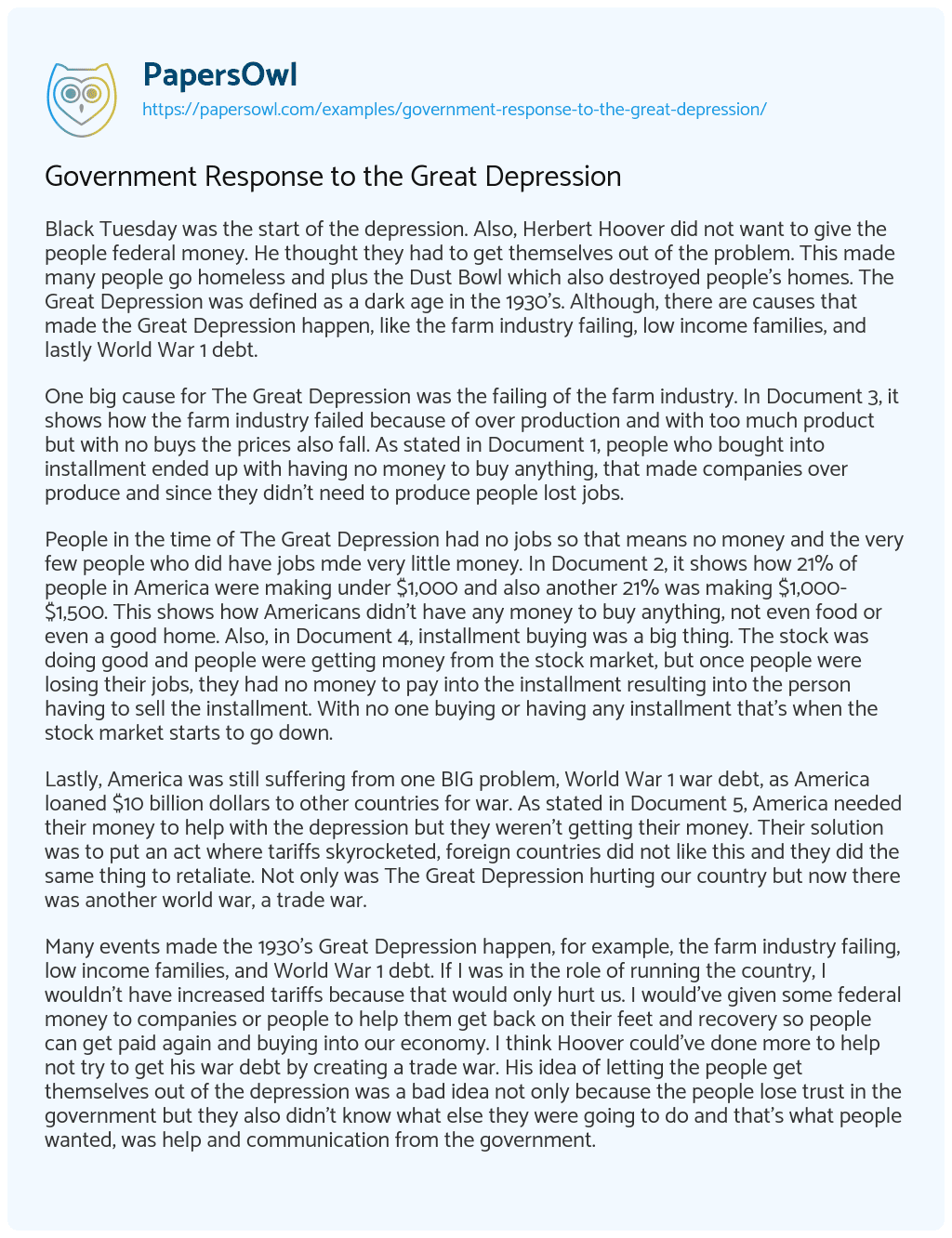 Black Tuesday was the start of the depression. Also, Herbert Hoover did not want to give the people federal money. He thought they had to get themselves out of the problem. This made many people go homeless and plus the Dust Bowl which also destroyed people’s homes. The Great Depression was defined as a dark age in the 1930’s. Although, there are causes that made the Great Depression happen, like the farm industry failing, low income families, and lastly World War 1 debt.

One big cause for The Great Depression was the failing of the farm industry. In Document 3, it shows how the farm industry failed because of over production and with too much product but with no buys the prices also fall. As stated in Document 1, people who bought into installment ended up with having no money to buy anything, that made companies over produce and since they didn’t need to produce people lost jobs.

People in the time of The Great Depression had no jobs so that means no money and the very few people who did have jobs mde very little money. In Document 2, it shows how 21% of people in America were making under $1,000 and also another 21% was making $1,000-$1,500. This shows how Americans didn’t have any money to buy anything, not even food or even a good home. Also, in Document 4, installment buying was a big thing. The stock was doing good and people were getting money from the stock market, but once people were losing their jobs, they had no money to pay into the installment resulting into the person having to sell the installment. With no one buying or having any installment that’s when the stock market starts to go down.

Lastly, America was still suffering from one BIG problem, World War 1 war debt, as America loaned $10 billion dollars to other countries for war. As stated in Document 5, America needed their money to help with the depression but they weren’t getting their money. Their solution was to put an act where tariffs skyrocketed, foreign countries did not like this and they did the same thing to retaliate. Not only was The Great Depression hurting our country but now there was another world war, a trade war.

Many events made the 1930’s Great Depression happen, for example, the farm industry failing, low income families, and World War 1 debt. If I was in the role of running the country, I wouldn’t have increased tariffs because that would only hurt us. I would’ve given some federal money to companies or people to help them get back on their feet and recovery so people can get paid again and buying into our economy. I think Hoover could’ve done more to help not try to get his war debt by creating a trade war. His idea of letting the people get themselves out of the depression was a bad idea not only because the people lose trust in the government but they also didn’t know what else they were going to do and that’s what people wanted, was help and communication from the government.

Government Response to the Great Depression. (2020, Mar 24). Retrieved from https://papersowl.com/examples/government-response-to-the-great-depression/

Unemployment during the Great Depression