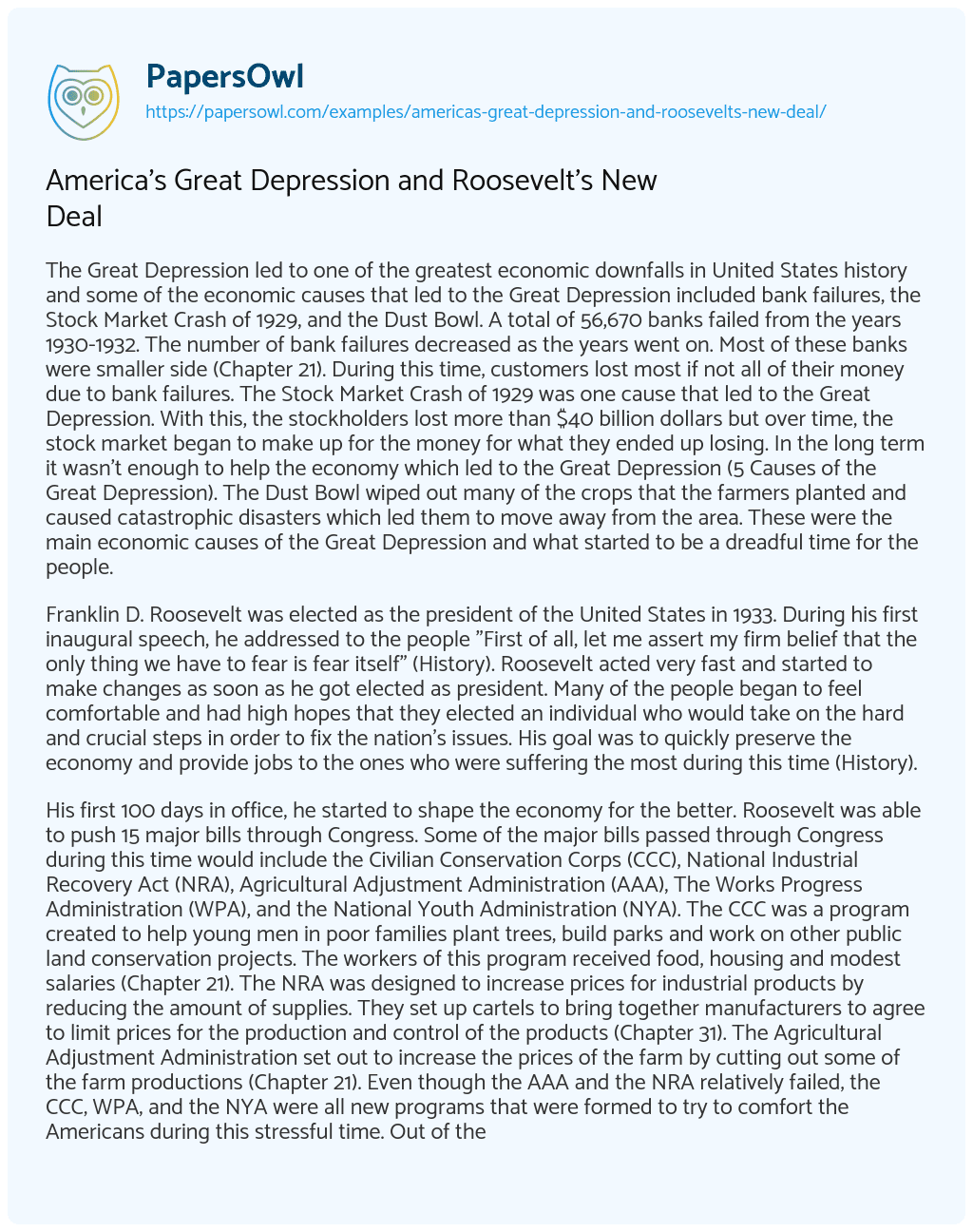 Franklin D. Roosevelt was elected as the president of the United States in 1933. During his first inaugural speech, he addressed to the people “First of all, let me assert my firm belief that the only thing we have to fear is fear itself” (History). Roosevelt acted very fast and started to make changes as soon as he got elected as president. Many of the people began to feel comfortable and had high hopes that they elected an individual who would take on the hard and crucial steps in order to fix the nation’s issues. His goal was to quickly preserve the economy and provide jobs to the ones who were suffering the most during this time (History).

His first 100 days in office, he started to shape the economy for the better. Roosevelt was able to push 15 major bills through Congress. Some of the major bills passed through Congress during this time would include the Civilian Conservation Corps (CCC), National Industrial Recovery Act (NRA), Agricultural Adjustment Administration (AAA), The Works Progress Administration (WPA), and the National Youth Administration (NYA). The CCC was a program created to help young men in poor families plant trees, build parks and work on other public land conservation projects. The workers of this program received food, housing and modest salaries (Chapter 21). The NRA was designed to increase prices for industrial products by reducing the amount of supplies. They set up cartels to bring together manufacturers to agree to limit prices for the production and control of the products (Chapter 31). The Agricultural Adjustment Administration set out to increase the prices of the farm by cutting out some of the farm productions (Chapter 21). Even though the AAA and the NRA relatively failed, the CCC, WPA, and the NYA were all new programs that were formed to try to comfort the Americans during this stressful time. Out of these new programs which were formed, the WPA ended up being the most beneficial since it provided jobs to many of the unemployed individuals (Chapter 21). The very next day, he declared a four-day bank holiday to stop people from taking their money out of the banks. On March 9, Congress passed the Emergency Banking Act, which helped restructure some banks and close the ones that seemed to not be getting better. Banks were put into three different classes (A,B, and C). Class A classified as banks with no danger of failing, Class B were banks that were in somewhat danger but was not too serious, and Class C where banks were bankrupt and never reopened. Most of the banks ended up reopening and continued to run the way they’ve been. Roosevelt then ended up started the “Fireside Chat” which allowed people to hear President Roosevelt’s speech which he told everyone to have confidence and courage throughout this whole process (History).

Roosevelt, the Great Depression, and the Economics of Recovery