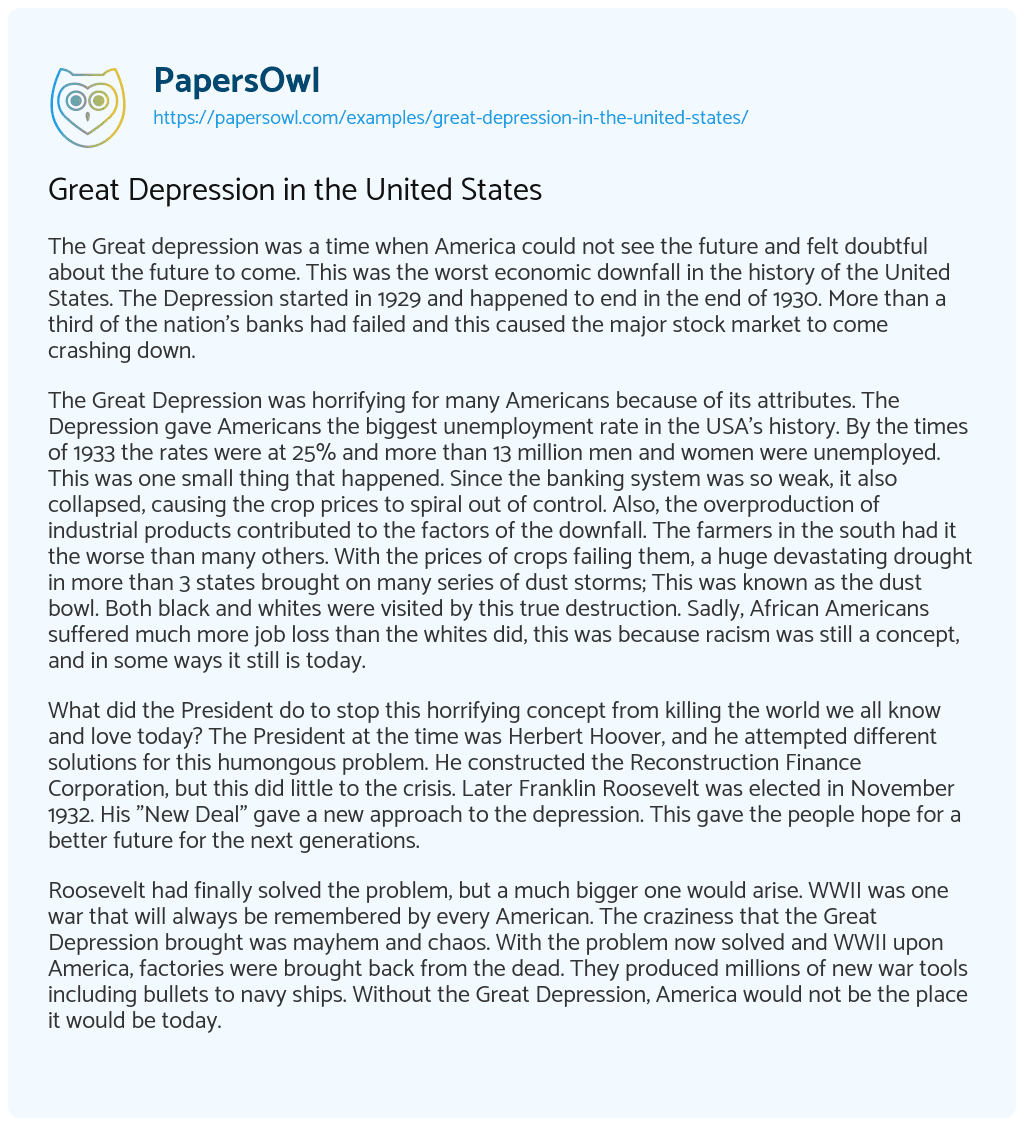 The Great depression was a time when America could not see the future and felt doubtful about the future to come. This was the worst economic downfall in the history of the United States. The Depression started in 1929 and happened to end in the end of 1930. More than a third of the nation’s banks had failed and this caused the major stock market to come crashing down.

The Great Depression was horrifying for many Americans because of its attributes. The Depression gave Americans the biggest unemployment rate in the USA’s history. By the times of 1933 the rates were at 25% and more than 13 million men and women were unemployed. This was one small thing that happened. Since the banking system was so weak, it also collapsed, causing the crop prices to spiral out of control. Also, the overproduction of industrial products contributed to the factors of the downfall. The farmers in the south had it the worse than many others. With the prices of crops failing them, a huge devastating drought in more than 3 states brought on many series of dust storms; This was known as the dust bowl. Both black and whites were visited by this true destruction. Sadly, African Americans suffered much more job loss than the whites did, this was because racism was still a concept, and in some ways it still is today.

What did the President do to stop this horrifying concept from killing the world we all know and love today? The President at the time was Herbert Hoover, and he attempted different solutions for this humongous problem. He constructed the Reconstruction Finance Corporation, but this did little to the crisis. Later Franklin Roosevelt was elected in November 1932. His “New Deal” gave a new approach to the depression. This gave the people hope for a better future for the next generations.

Roosevelt had finally solved the problem, but a much bigger one would arise. WWII was one war that will always be remembered by every American. The craziness that the Great Depression brought was mayhem and chaos. With the problem now solved and WWII upon America, factories were brought back from the dead. They produced millions of new war tools including bullets to navy ships. Without the Great Depression, America would not be the place it would be today.

Great Depression in the United States. (2020, May 09). Retrieved from https://papersowl.com/examples/great-depression-in-the-united-states/

Effects of the Great Depression on Life of Americans