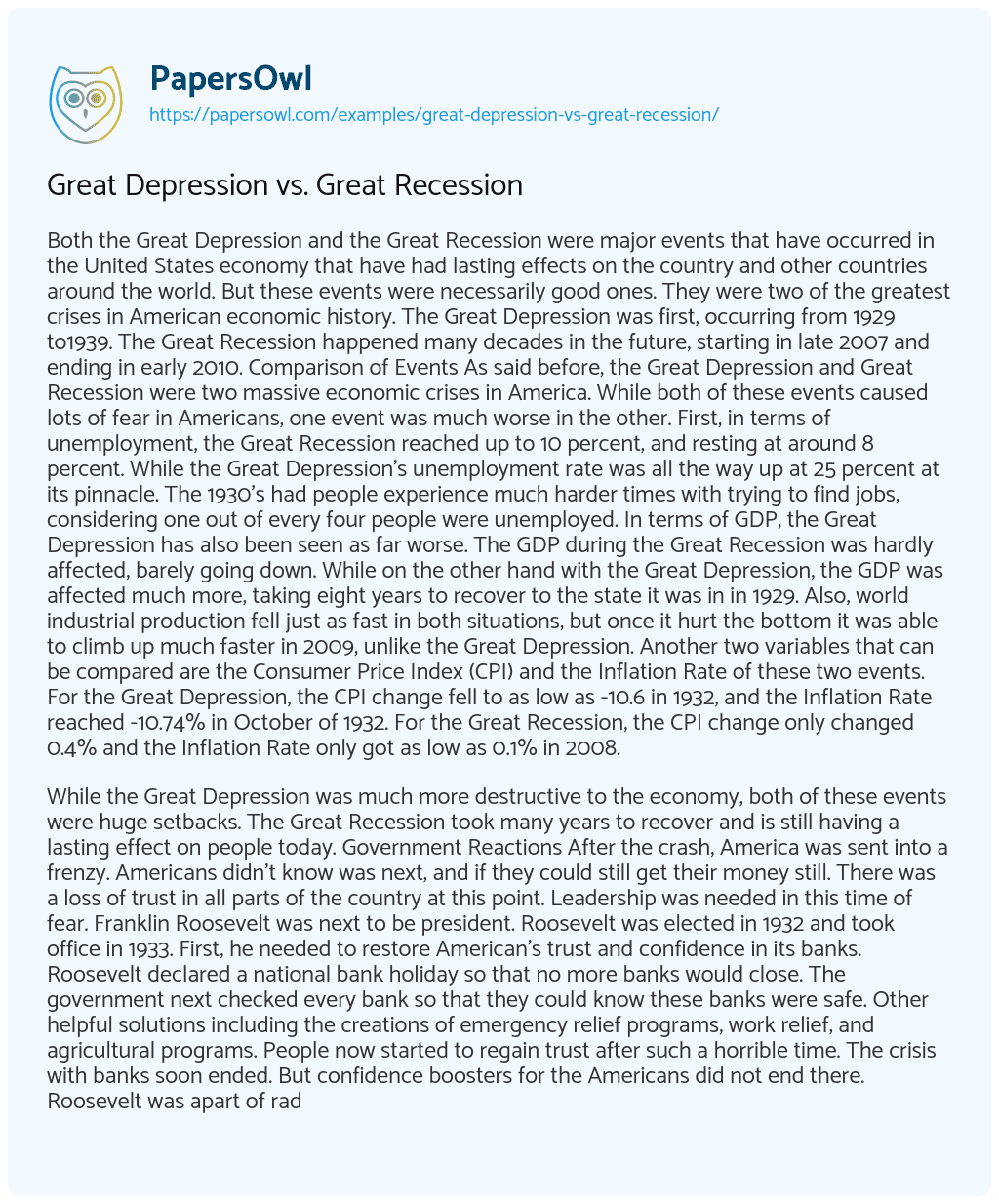 While the Great Depression was much more destructive to the economy, both of these events were huge setbacks. The Great Recession took many years to recover and is still having a lasting effect on people today. Government Reactions After the crash, America was sent into a frenzy. Americans didn’t know was next, and if they could still get their money still. There was a loss of trust in all parts of the country at this point. Leadership was needed in this time of fear. Franklin Roosevelt was next to be president. Roosevelt was elected in 1932 and took office in 1933. First, he needed to restore American’s trust and confidence in its banks. Roosevelt declared a national bank holiday so that no more banks would close. The government next checked every bank so that they could know these banks were safe. Other helpful solutions including the creations of emergency relief programs, work relief, and agricultural programs. People now started to regain trust after such a horrible time. The crisis with banks soon ended. But confidence boosters for the Americans did not end there. Roosevelt was apart of radio shows called “Fireside Chats”. These shows told the people what Roosevelt was up to all the time so that the people knew at all times the President was working to get America back up on its feet. These talks restored so much trust that was lost after the fall. After restoring confidence and trust, Roosevelt soon created a plan that would be the beginning of ending the Great Depression.

This plan was called the New Deal. The New Deal created many new agencies and programs that addressed specific problems that were going on the economy. Agencies and programs such as Works Progress Association (WPA), and Civilian Conservation Corps (CCC). Soon after that, a second New Deal was created to really start getting America moving forward and grow the economy even faster. The second New Deal went by the “Three R’s”: Relief, Recovery, and Reform. The main idea was to fix the current struggling issues, then lay down the foundation of the economy for the future, and finally, hope to prevent and crisis like this in the future. The New Deal had done what if needed to do, and by 1939 was pretty much over. In the short run, the New Deal had done its job. But in the long run, problems would soon emerge again. The Great Recession is a different story. In order to get the economy back on track, they would have to be able to let the government intervene. The government would intervene and take control of most private sectors. They would have to do this in order to bail out financial institutions that were extremely distressed. Many who were being helped out after the government’s bailout were able to pay back the government quickly. The government also helped bail out financial institutions by creating the Troubled Asset Relief Program (TARP). TARP helped the economy out by setting money aside to the Department of the Treasury to buy unproductive houses by purchasing financial company stock.

Another way that the government aided the economy was by giving money from the government and putting it into the economy. This action would be able to produced business activity when these private loans from the government were scarce. Effects on Business Decision-Making The Great Depression sent many business owners into a frenzy. They did not know what to expect next for not only their business but their lives as well. Since all of the banks and most businesses were closed, organizations were just living off of charity money. There was also no point in businesses to keeps producing and see unsold products not moving. Business owners needed help if they were going to be able to keep their company alive. The New Deal would ultimately be the deciding factor. The New Deal introduced many new groups and help programs. One being the National Recovery Administration, helped get the industry and the labor back on its feet. The NRA would be able to set prices, levels of production, minimum wages, and max hours in each industry there was. They also got help by supporting workers to join labor forces. The NRA did a lot in order to help business owners get back the confidence they needed to keep going. Also, acts that were made from the New Deal were the Beer Act, which eliminated Prohibition, and eventually helped raised the government’s revenue. And the Economy Act, which cut pay for government workers. These acts helped the government bring in money that would eventually be used to help business organizations. With the Great Recession, business owners were also sent into a frenzy when the recession hit. Business would become harder to come by in that sale revenue and profits.

As these two variables go down, companies looked for any way to cut costs. One way is of course not hiring employees. Also, there can be cuts in other aspects like quality of goods and serives. Many businesses didn’t have a choice but to produce lower quality foods and goods and also have their maintenance and cleanliness be less important than it was before. For smaller businesses at this time, it was even worse. These smaller businesses experienced all the problems above, and more. They didn’t have as much money as these bigger corporations, and bankruptcies occured more often in these small businesses than the larger businesses. And not only were the small businesses affected, but the neighboring communities around it were also affected. So business men had to be careful in how they operated and spent their money in order to keep their business and the community alive. Economic Models The idea of Keynesian Economics fits the best with Great Depression. The increase in the aggregate demand mean for the potential output on this time to lower all the way down, resulting in a large recessionary gap that lasted for years until World War II. The drop in aggregate demand (AD) really started when investment levels went down. Large corporations did not need to invest due to their large amount of stock. One the crash hit, confidence of business owners went down, and decreased investment even more. This is when they found out that investment plays such a huge part in AD. As these recessionary gaps widened, wages also started to go down, and short-run aggregate supply curve started to shift to the right. An expansionary fiscal policy forced changed during WWII, ending the depression.

Forecasters blew it off, thinking that it would not be a big deal to us. Forecasters became complacent, and it turned out to hurt in the end. Luckily, since America had been in this situation before, they were able to get out of the recession much easier. The Role of Economic Thinking in the Nature of Business Organization Many economic thinking ideas played big roles in both of these events. Moral Hazards is basically the idea that a group of people investment in risky investments, knowing that they are safe and that someone else will suffer from it. During the Great Depression, moral hazards played a big role with the banks at this time. Banks knew that the stock market was collapsing, so they went ahead and collected money that investors borrowed from them. The U.S. also had a foreign exchange problems such was not buying from other countries but needing those countries to buy from them. Moral hazards played a huge role in many hardships during the Great Depression. The Great Recession had economic ideas that affected it as well. Especially the “Principal Agent Problem”. It was really one of the most important causes of the recession. The problem came into effect when agents were telling households to take mortgages that they knew they couldn’t afford. They took advantage of these families and received personal gain from it. Little these agents know, they were one of the reasons why the economy went into recession. Of course, both sides are always at fault in a recession, but the agents that were looking for personal wealth caused everyone to lose.

Great Depression vs. Great Recession. (2019, May 06). Retrieved from https://papersowl.com/examples/great-depression-vs-great-recession/

Why was Herbert Hoover Blamed for the Great Depression?