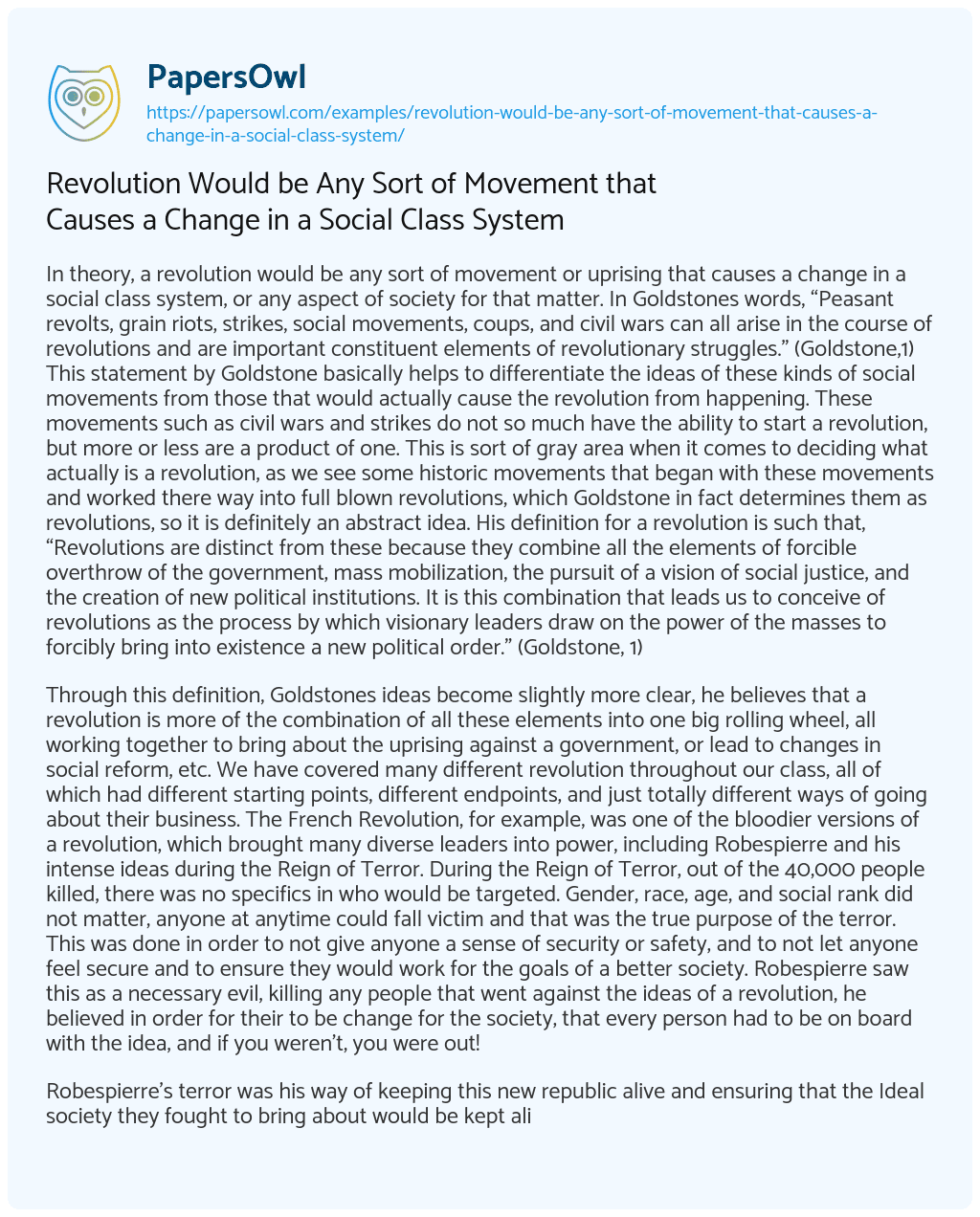 In theory, a revolution would be any sort of movement or uprising that causes a change in a social class system, or any aspect of society for that matter. In Goldstones words, “Peasant revolts, grain riots, strikes, social movements, coups, and civil wars can all arise in the course of revolutions and are important constituent elements of revolutionary struggles.” (Goldstone,1) This statement by Goldstone basically helps to differentiate the ideas of these kinds of social movements from those that would actually cause the revolution from happening. These movements such as civil wars and strikes do not so much have the ability to start a revolution, but more or less are a product of one. This is sort of gray area when it comes to deciding what actually is a revolution, as we see some historic movements that began with these movements and worked there way into full blown revolutions, which Goldstone in fact determines them as revolutions, so it is definitely an abstract idea. His definition for a revolution is such that, “Revolutions are distinct from these because they combine all the elements of forcible overthrow of the government, mass mobilization, the pursuit of a vision of social justice, and the creation of new political institutions. It is this combination that leads us to conceive of revolutions as the process by which visionary leaders draw on the power of the masses to forcibly bring into existence a new political order.” (Goldstone, 1)

Through this definition, Goldstones ideas become slightly more clear, he believes that a revolution is more of the combination of all these elements into one big rolling wheel, all working together to bring about the uprising against a government, or lead to changes in social reform, etc. We have covered many different revolution throughout our class, all of which had different starting points, different endpoints, and just totally different ways of going about their business. The French Revolution, for example, was one of the bloodier versions of a revolution, which brought many diverse leaders into power, including Robespierre and his intense ideas during the Reign of Terror. During the Reign of Terror, out of the 40,000 people killed, there was no specifics in who would be targeted. Gender, race, age, and social rank did not matter, anyone at anytime could fall victim and that was the true purpose of the terror. This was done in order to not give anyone a sense of security or safety, and to not let anyone feel secure and to ensure they would work for the goals of a better society. Robespierre saw this as a necessary evil, killing any people that went against the ideas of a revolution, he believed in order for their to be change for the society, that every person had to be on board with the idea, and if you weren’t, you were out!

Robespierre’s terror was his way of keeping this new republic alive and ensuring that the Ideal society they fought to bring about would be kept alive. Despite how it looks on the surface it is a necessary measure and tactic that would be used throughout history by political leaders for years to come. Robespierre was considered a genius by many people, but also a crazed lunatic when it came to pushing for his ideas to become truth. “Robespierre was frustrated with the progress of the revolution. After issuing threats to the National Convention, he himself was arrested in July 1794. He tried to shoot himself but missed, and spent his last few hours with his jaw hanging off. He was guillotined, as a victim of the terror, on July 28, 1794.” ( Robespierre: On the Moral and Political Principles of Domestic Policy) This would raise the question for many revolutions to follow; what is considered too extreme in order for a social change? Is it still considered a Revolution even if mass amounts of people need to die for it be even succeed?

The French Revolution definitely supports Goldstones ideas of a revolution, as there was a visible and clear overthrow of government, as well as new political institutions although they were through tough methods. Another example that helps support Goldstones theory of what exactly a revolution is would be the American Revolution. The American Revolution, which started in 1765, portrayed a long war with much bloodshed on both sides of the battle. This war called for the change of mercantilist control of the colonies, and American was brutally trying to become a free nation and escape the British rule. This was not so much as a forcible overthrow of government in a sense, but more so a completely new definition of rule and political agenda.

The American people for the most part all came together in order to work together and fight the British, which helps boosts Goldstones example of the mass mobilization of people coming together in order to have a new political power in control. When one country has the power to control another as well as hold it back from its true potential, is usually when a revolution is necessary, as Thomas Paine said; “America should claim independence instead of being one with Britain or even to have a say in government”. This quote exemplifies the fact that America had so much potential to grow while the British were controlling them, so a revolution here would be necessary in Goldstones book. When we look back in the history books, we seem to always pick up the story near the end, the glorious part, and in this part it was America finally winning and becoming their own nation, which most people tend to focus on the most, but what most people tend to forget about is that usually these revolutions start from the ground up, from the common people. This is where there is a fault in Goldstone definition of the word “revolution”, because his view on it kind of only seems to be focusing on the moving parts and the positive outcome of the motion, but fails to include all those small examples and minor factors that go into getting the ball rolling.

One example in history we see that falls victim to this theory in my opinion is the movement of the Lutheran religion and the start of the revolt against the modern catholic church. Martin Luther is often never credited to being a revolutionary figure, but rather just a figure in history that helped shape something for future generations to come. Martin Luther fought against the outcry of indulgences within the Catholic Church, which was a scam being run by the officials in the church that would make followers of the faith pay to have their sins “absolved”. “The pope has neither the will nor the power to remit any penalties beyond those imposed either at his own discretion or by canon law.” (“The Ninety-Five Theses, Martin Luther)” At the time of the release of the Ninety Five theses, there was nothing else going against the catholic faith, so that in itself should have helped to classify with the term “revolution”. On the other hand though, Martin Luther’s actions were successful in a sense, but obviously never gained as huge of a following as Catholicism, and maybe that is why Goldstone doesn’t pay as much attention towards it.

I believe that even though some of the revolutionary actions and thoughts might not have been 100% successful in on of their own idea, but if they led to something that caused a huge change, they should be found as a revolutionary action as well, and that is where I believe a flaw is met in the ideas of Goldstone.

Revolution Would be Any Sort of Movement that Causes a Change in a Social Class System. (2021, May 27). Retrieved from https://papersowl.com/examples/revolution-would-be-any-sort-of-movement-that-causes-a-change-in-a-social-class-system/

The French Revolution: Social and Political Crisis in France

Why was the American Revolution a Conservative Movement?

Success and Justice of American Revolution