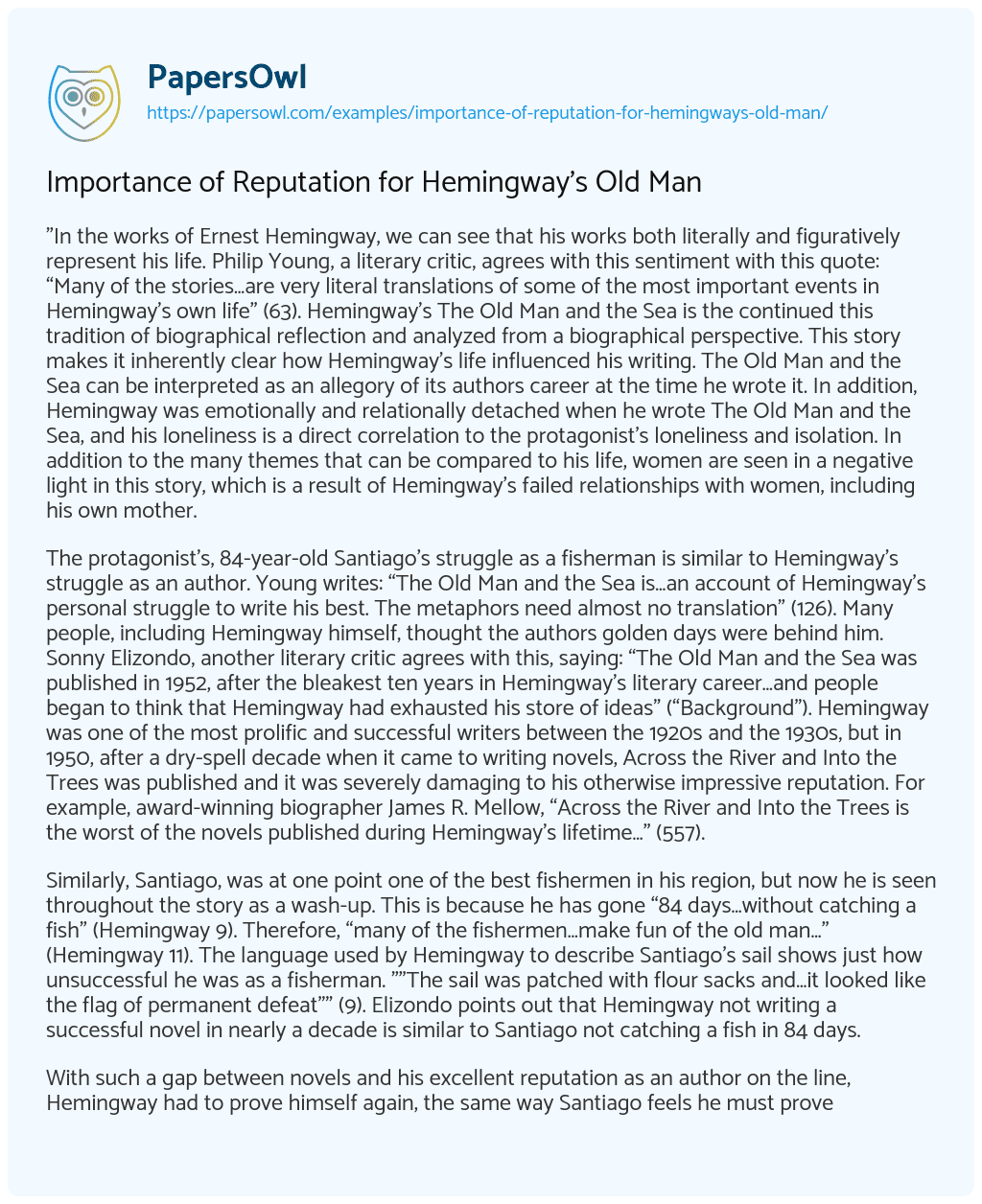 “In the works of Ernest Hemingway, we can see that his works both literally and figuratively represent his life. Philip Young, a literary critic, agrees with this sentiment with this quote: “Many of the stories…are very literal translations of some of the most important events in Hemingway’s own life” (63). Hemingway’s The Old Man and the Sea is the continued this tradition of biographical reflection and analyzed from a biographical perspective. This story makes it inherently clear how Hemingway’s life influenced his writing. The Old Man and the Sea can be interpreted as an allegory of its authors career at the time he wrote it. In addition, Hemingway was emotionally and relationally detached when he wrote The Old Man and the Sea, and his loneliness is a direct correlation to the protagonist’s loneliness and isolation. In addition to the many themes that can be compared to his life, women are seen in a negative light in this story, which is a result of Hemingway’s failed relationships with women, including his own mother.

The protagonist’s, 84-year-old Santiago’s struggle as a fisherman is similar to Hemingway’s struggle as an author. Young writes: “The Old Man and the Sea is…an account of Hemingway’s personal struggle to write his best. The metaphors need almost no translation” (126). Many people, including Hemingway himself, thought the authors golden days were behind him. Sonny Elizondo, another literary critic agrees with this, saying: “The Old Man and the Sea was published in 1952, after the bleakest ten years in Hemingway’s literary career…and people began to think that Hemingway had exhausted his store of ideas” (“Background”). Hemingway was one of the most prolific and successful writers between the 1920s and the 1930s, but in 1950, after a dry-spell decade when it came to writing novels, Across the River and Into the Trees was published and it was severely damaging to his otherwise impressive reputation. For example, award-winning biographer James R. Mellow, “Across the River and Into the Trees is the worst of the novels published during Hemingway’s lifetime…” (557).

Similarly, Santiago, was at one point one of the best fishermen in his region, but now he is seen throughout the story as a wash-up. This is because he has gone “84 days…without catching a fish” (Hemingway 9). Therefore, “many of the fishermen…make fun of the old man…” (Hemingway 11). The language used by Hemingway to describe Santiago’s sail shows just how unsuccessful he was as a fisherman. “”The sail was patched with flour sacks and…it looked like the flag of permanent defeat”” (9). Elizondo points out that Hemingway not writing a successful novel in nearly a decade is similar to Santiago not catching a fish in 84 days.

With such a gap between novels and his excellent reputation as an author on the line, Hemingway had to prove himself again, the same way Santiago feels he must prove himself by catching the huge marlin. Hemingway writes: “Now he (Santiago) was proving it again. Each time was a new time and he never thought about the past when he was doing it”” (66). To keep their reputations intact, Santiago had to catch an unbelievable fish, just as Hemingway had to write an unbelievable novel. Santiago’s mission to catch the marlin is symbolic of Hemingway’s quest to write a career-saving novel.”

Importance of Reputation for Hemingway's Old Man. (2021, May 27). Retrieved from https://papersowl.com/examples/importance-of-reputation-for-hemingways-old-man/

Ernest Hemingway’s “The Old Man and the Sea”

Ernest Hemingway’s Life and the Old Man and the Sea

Old Man and the Sea by Ernest Hemingway

Analysis of Hemingway’s ‘The Old Man and the Sea’