Representation of Athleticism in Greek and Early Italian Renaissance Art 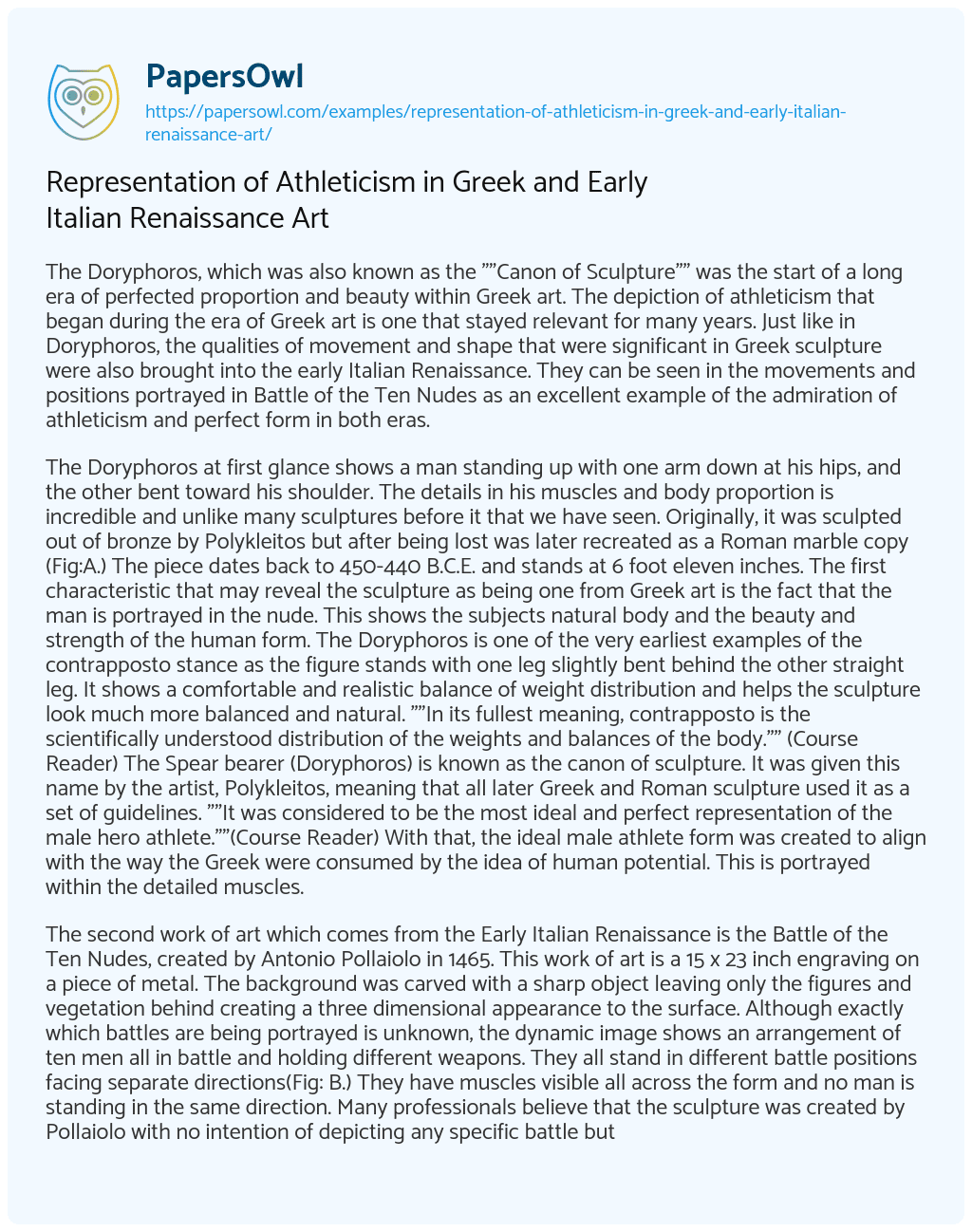 The Doryphoros, which was also known as the “”Canon of Sculpture”” was the start of a long era of perfected proportion and beauty within Greek art. The depiction of athleticism that began during the era of Greek art is one that stayed relevant for many years. Just like in Doryphoros, the qualities of movement and shape that were significant in Greek sculpture were also brought into the early Italian Renaissance. They can be seen in the movements and positions portrayed in Battle of the Ten Nudes as an excellent example of the admiration of athleticism and perfect form in both eras.

The Doryphoros at first glance shows a man standing up with one arm down at his hips, and the other bent toward his shoulder. The details in his muscles and body proportion is incredible and unlike many sculptures before it that we have seen. Originally, it was sculpted out of bronze by Polykleitos but after being lost was later recreated as a Roman marble copy (Fig:A.) The piece dates back to 450-440 B.C.E. and stands at 6 foot eleven inches. The first characteristic that may reveal the sculpture as being one from Greek art is the fact that the man is portrayed in the nude. This shows the subjects natural body and the beauty and strength of the human form. The Doryphoros is one of the very earliest examples of the contrapposto stance as the figure stands with one leg slightly bent behind the other straight leg. It shows a comfortable and realistic balance of weight distribution and helps the sculpture look much more balanced and natural. “”In its fullest meaning, contrapposto is the scientifically understood distribution of the weights and balances of the body.”” (Course Reader) The Spear bearer (Doryphoros) is known as the canon of sculpture. It was given this name by the artist, Polykleitos, meaning that all later Greek and Roman sculpture used it as a set of guidelines. “”It was considered to be the most ideal and perfect representation of the male hero athlete.””(Course Reader) With that, the ideal male athlete form was created to align with the way the Greek were consumed by the idea of human potential. This is portrayed within the detailed muscles.

The second work of art which comes from the Early Italian Renaissance is the Battle of the Ten Nudes, created by Antonio Pollaiolo in 1465. This work of art is a 15 x 23 inch engraving on a piece of metal. The background was carved with a sharp object leaving only the figures and vegetation behind creating a three dimensional appearance to the surface. Although exactly which battles are being portrayed is unknown, the dynamic image shows an arrangement of ten men all in battle and holding different weapons. They all stand in different battle positions facing separate directions(Fig: B.) They have muscles visible all across the form and no man is standing in the same direction. Many professionals believe that the sculpture was created by Pollaiolo with no intention of depicting any specific battle but to serve as a way for other artists to see the human form in all the different arrangements and positions represented within the carving. Assuming that this was the intention of Pollaiolo, this would be very similar to the canon aspect of Doryphoros. Another important characteristic of this era was creating depth and realism within the pieces. This is definitely being utilized in Battle of the ten nudes as the carvings have extremely sharp details and much more realism than had recently been used between this era and the Greek classical era. “”Apart from its conception of the nude, the print also showcases the artist’s technical ability, especially in the modeling, or contouring of light and dark, used to create volume in the men’s bodies”” (Kahn Academy). This goes into one of the other important characteristics of this era which was the reintroduction of Greek and Roman art styles.

The most straightforward difference between these two pieces unquestionably has to be the fact that one is a sculpture and one is a carving. While the similarities of these two pieces may seem to some, a bit less clear at first glance, they still become evident after the stylistic analysis. Although one of the main features of Doryphoros is a contrapposto, this cannot exactly be utilized in battle of the ten nudes, as the dynamic twist of the body is certainly still in use within the carving. The different positions of the body create a similar quality. In the same way, the two artist also pay close attention to the use of muscles and in a way, exaggerated muscles. Battle of the ten nudes focuses much more on the shapes and movements of the muscles when they are under the great stress of battle. Doryphoros is more focused on the way they look when relaxed.””His head is turned slightly to the right, the heavily-muscled but athletic figure of the Doryphoros is depicted standing in the instant that he steps forward from a static pose.””(Research Omicsgroup) This reminds us of another difference, which is the way that both pieces depict movement. One shows very clear battle movement while the other just alludes to movement. It is still clear the significance of the muscular male body. The ideal male body is something that Polykleitos may have valued more than anything else when it came to his sculpture. As stated above, he had an entire mathematical plan that he believed would create the most aesthetically pleasing vision. When looking at his work, this is apparent. The way the sculpture stands and the proportions he used were stunning and unlike most before him. In this way, Antonio Pollaiolo was quite different. He seemed to still consider proportion but definitely not to the same degree of Polykleitos.

When considering the cultural context of the doryphoros, many historians believe the beginning of the Classical era to be thanks to the defeat of the Persians. Sculpture and art style in general began to change with the newfound confidence of the Greeks. According to Gardners Art through the Ages: Western Perspective “”Early classical sculptors were some of the very first to break away from the rigid and unnatural Egyptian poses.””(115) The weight shift is one of the main points that separate classical from archaic greek sculpture. Contrapposto is also in a way responsible for the interest in greek and roman art that we see in the early renaissance and with Battle of the ten nudes. Polykleitos with Doryphoros did an exceptional job of combining all the characteristics that had begun to be celebrated within this new era of art. Created as a sample of the ideal male warrior proportion, Polykleitos used a mathematical equation he came up with to create the sculpture. The canon was considered a perfect representation of the model human being in regard to the high classical era. In the words of Andrew Stewart, author of ‘Classical Greece and the Birth of Western art,’ “”His middling physique and perfect proportions exhort us to work out until we drop; and his lowered glance urges modesty before the gods””(72) This describes a perfect example of the role of the gods within this era as well as the worth of art and male warriors.

Antonio Pollaiolo had an interest in realistic representation of the human form in action. He enjoyed showing the violent action and strain that could be put on the body which lead him to prefer portraying his subjects in battle. The renaissance was the start of some new things, but overall a rebirth of art. It was also the time where many qualities of Greek art started to be used once again. “”In very simple terms, the Italian Renaissance re-established Western art according to the principles of classical Greek art, especially Greek sculpture and painting.”” (Visual Arts Cork) Another important quality of the Early Italian renaissance was the belief in humanism. “”Humanism downplayed religious and secular dogma and instead attached the greatest importance to the dignity and worth of the individual.”” (Visual Arts Cork) Which I can see in this piece, as there is no clear illusion of any god.

We know that Polykleitos created Doryphoros as a template or “”canon”” for other artists to use and look to when creating their own art. This aligns with what they believed in this era about human potential. The potential to create this perfectly proportioned masterpiece that would give people a look into what was believed to be the ideal form. This idea is similar to the concept or theory that Pollaiolo created Battle of the Nudes for the similar purpose of giving artists an example of how the form should look in different positions. Whether or not that was the purpose, both pieces were potentially the most copied and celebrated works of their eras. These two ideas seem to show a lot about each era and the importance of an athletic form as well as the idea that there was a way that the human body should look. They also exhibit the artistic similarities that began do to the rebirth of art.

It is clear that Western art as well as each era valued greatly from each of these two pieces, after we continue to celebrate them centuries later. As we have revealed in the above paragraphs, the qualities of motion and shape that were significant in Greek sculpture and even more so in Doryphoros were also quite noteworthy in the early Italian Renaissance. They can be seen in the movements and positions portrayed in battle of the Ten Nudes as an excellent example of the admiration of athleticism and perfection of the form in each era.