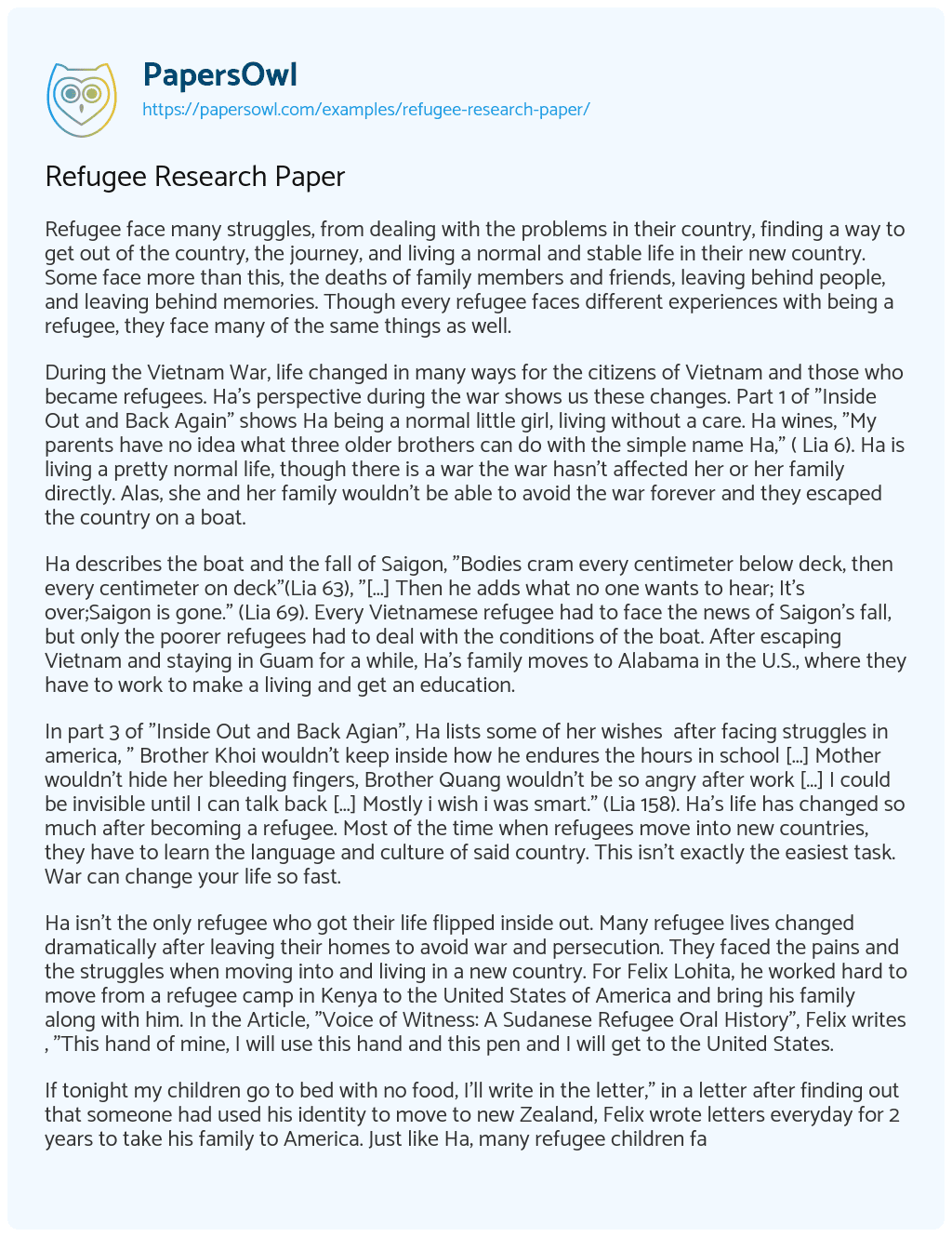 Refugee face many struggles, from dealing with the problems in their country, finding a way to get out of the country, the journey, and living a normal and stable life in their new country. Some face more than this, the deaths of family members and friends, leaving behind people, and leaving behind memories. Though every refugee faces different experiences with being a refugee, they face many of the same things as well.

During the Vietnam War, life changed in many ways for the citizens of Vietnam and those who became refugees. Ha’s perspective during the war shows us these changes. Part 1 of “Inside Out and Back Again” shows Ha being a normal little girl, living without a care. Ha wines, “My parents have no idea what three older brothers can do with the simple name Ha,” ( Lia 6). Ha is living a pretty normal life, though there is a war the war hasn’t affected her or her family directly. Alas, she and her family wouldn’t be able to avoid the war forever and they escaped the country on a boat.

Ha describes the boat and the fall of Saigon, “Bodies cram every centimeter below deck, then every centimeter on deck”(Lia 63), “[…] Then he adds what no one wants to hear; It’s over;Saigon is gone.” (Lia 69). Every Vietnamese refugee had to face the news of Saigon’s fall, but only the poorer refugees had to deal with the conditions of the boat. After escaping Vietnam and staying in Guam for a while, Ha’s family moves to Alabama in the U.S., where they have to work to make a living and get an education.

In part 3 of “Inside Out and Back Agian”, Ha lists some of her wishes  after facing struggles in america, ” Brother Khoi wouldn’t keep inside how he endures the hours in school […] Mother wouldn’t hide her bleeding fingers, Brother Quang wouldn’t be so angry after work […] I could be invisible until I can talk back […] Mostly i wish i was smart.” (Lia 158). Ha’s life has changed so much after becoming a refugee. Most of the time when refugees move into new countries, they have to learn the language and culture of said country. This isn’t exactly the easiest task. War can change your life so fast.

Ha isn’t the only refugee who got their life flipped inside out. Many refugee lives changed dramatically after leaving their homes to avoid war and persecution. They faced the pains and the struggles when moving into and living in a new country. For Felix Lohita, he worked hard to move from a refugee camp in Kenya to the United States of America and bring his family along with him. In the Article, “Voice of Witness: A Sudanese Refugee Oral History”, Felix writes , “This hand of mine, I will use this hand and this pen and I will get to the United States.

If tonight my children go to bed with no food, I’ll write in the letter,” in a letter after finding out that someone had used his identity to move to new Zealand, Felix wrote letters everyday for 2 years to take his family to America. Just like Ha, many refugee children faced problems at school, like bullying and learning. In the article, “Going to School as a Refugee” by Carolin Garrison , Burmese Refugee “SB” sleeks of the struggles that come with being new and foreign at a U.S. school. SB says, “People would laugh at my accent […] Some of them would call me names and words that I didn’t understand, but I know they were supposed to be mean.”

Refugees would face discrimination for their appearance, accents and nationalities. Many also lose or leave behind loved ones, which would change their lives drastically. In the written interview and article “Children of War” by Arthur Brice, an interviewer asks, Bosnian Refugees, Emir and Amelia how their father had died, the article explains, “Their father […] was kidnapped and killed by Serb forces in 1992. They live with their mother.” (Brice 25) losing someone was common as a Refugee and could change a family’s life completely. War and persecution can change people’s lives so quickly.

Ha’s life begins to change for the better in the U.S after she told people about her situation at school and began to become close to Mrs.Washington, Steven, and Pam. The best way for a Refugee to cope with their situation is for them to express themselves. For Ha, she mainly talks to Brother Vu, Mrs.Washington, and her mother. In the story, after Ha tells her mother of all the bullying and all the wrong Ha had done, her mother still says, ” Oh, my daughter, at times you have to fight, but preferably not with your fists,” (Lia 216).

Even after hearing all these things forms her daughter, Ha’s mother forgives and consoles her. Ha also begins to make friends. At one point Steven and Pam helped Ha escape Pink Boy and his cousin, ” I run Pem and Sss-Ti-Van close behind […] Pem and I exchange coats with hoods. […] Sssi-Ti-Van stays to block the door.” ( Lia 223). Having friends to care and support her will help Ha become used to her new home and will make her feel a “normal” girl. Mrs.Washington also calms down Ha from her fit after Pink Boy bullied her. “I hate everyone! Even your Mama? […] She pats my hand. That one gesture dissolves the last of my hate spell,” (Lia 211). Ha finds someone she can trust and tell her feelings to, Ha can rely on Mrs.Washington. Ha begins to find people to find people and goals to reach to motivate herself, her life is slowly going back to normal.

For a Refugee going back to a normal life and finding belonging can be a struggle. In the article “Going to School as a Refugee” by Caroline Garrison, SB, a Refugee, talks about how making friends can help. ” I am worried a little. But people like Salomon and Ami and my friends from the neighborhood make me confident and make me know that I will be okay and I can succeed,” (Garrison 3).

Having people to support you and care for you can help Refugees become more confident in themselves. Finding communities and people like you can help as well. “He [Felix] gave his wife the option of moving his family anywhere in the United States . She chose Erie: a small quiet city with an African American refugee community already in place,”(Linderman 4). Finding a community with people like you can help copping and make you feel as if your still home. Refugees are more likely to be accepted here for their race and religion than in some other countries and in their own countries.

In this article called, ” Children of War,” interviewee, Amelia Kamenica says, “When is ya that I’m Muslim, they don’t react like, ‘oh, I don’t want to be with you, I don’t want to be your friend because you’re Muslim.” (Brice 26). In Croatia, Amelia was discriminated against for being Muslim, in the U.S she isn’t. Refugees can live a normal and happy life by finding places they aren’t discriminated in, friends, and community.

Vietnamese refugees faced many of the same problems and struggles as universal refugees. They both left their countries because war, persecution, and other reasons. In the article, “Panic Rises in Saigon, but the Exits are Few,” it says “Panic is clearly visible in Saigon now as thousands of Vietnamese try desperately to find ways to flee their country,” (Butterfield 11). Thousands of people were leaving to escape war and save family members. Many immigrants had to make sacrifices and were willing to do so. “A young American-trained economist […] asked an American friend to marry his wife, who is 3 months pregnant, and take her to the United States with him.” (Butterfield 11).

People were willing to do these crazy things if it meant the people they care about were safe. Refugees also ad to face the struggles of moving to a new country, “We sit and sleep in the lowest level of our cowboy’s house […] The wife insists we keep out of her neighbor’s eyes.” (Lia 116). Refugees faced poor conditions in their new countries because of the time and area they lived in. Ha’s family faced a lot of this. Though the Vietnamese refugee experience is much more specific, in retrospect the Universal Refugee Experience and the Vietnamese Refugee Experience were very similar.

Overall, it may be said Ha’s experience and other Vietnamese Refugee Experiences were a specific example of the Universal Refugee Experience. In general they face much of the same things, Ha and her family face life changing experiences and the struggle of getting back to a normal life. In general, Ha and her family faced the same thing as other refugees.

The Untold Journey of a Refugee