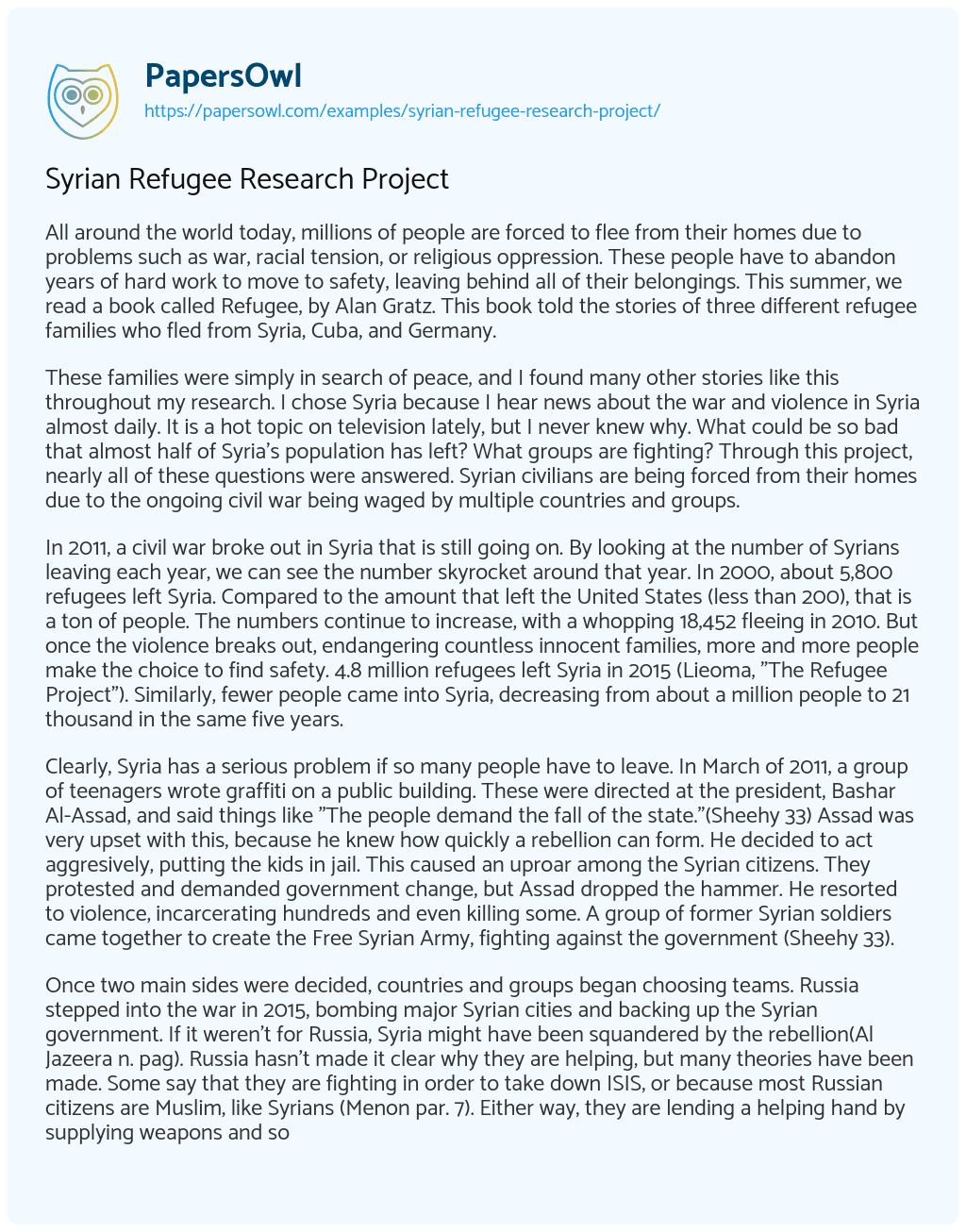 All around the world today, millions of people are forced to flee from their homes due to problems such as war, racial tension, or religious oppression. These people have to abandon years of hard work to move to safety, leaving behind all of their belongings. This summer, we read a book called Refugee, by Alan Gratz. This book told the stories of three different refugee families who fled from Syria, Cuba, and Germany.

These families were simply in search of peace, and I found many other stories like this throughout my research. I chose Syria because I hear news about the war and violence in Syria almost daily. It is a hot topic on television lately, but I never knew why. What could be so bad that almost half of Syria’s population has left? What groups are fighting? Through this project, nearly all of these questions were answered. Syrian civilians are being forced from their homes due to the ongoing civil war being waged by multiple countries and groups.

In 2011, a civil war broke out in Syria that is still going on. By looking at the number of Syrians leaving each year, we can see the number skyrocket around that year. In 2000, about 5,800 refugees left Syria. Compared to the amount that left the United States (less than 200), that is a ton of people. The numbers continue to increase, with a whopping 18,452 fleeing in 2010. But once the violence breaks out, endangering countless innocent families, more and more people make the choice to find safety. 4.8 million refugees left Syria in 2015 (Lieoma, “The Refugee Project”). Similarly, fewer people came into Syria, decreasing from about a million people to 21 thousand in the same five years.

Clearly, Syria has a serious problem if so many people have to leave. In March of 2011, a group of teenagers wrote graffiti on a public building. These were directed at the president, Bashar Al-Assad, and said things like “The people demand the fall of the state.”(Sheehy 33) Assad was very upset with this, because he knew how quickly a rebellion can form. He decided to act aggresively, putting the kids in jail. This caused an uproar among the Syrian citizens. They protested and demanded government change, but Assad dropped the hammer. He resorted to violence, incarcerating hundreds and even killing some. A group of former Syrian soldiers came together to create the Free Syrian Army, fighting against the government (Sheehy 33).

Once two main sides were decided, countries and groups began choosing teams. Russia stepped into the war in 2015, bombing major Syrian cities and backing up the Syrian government. If it weren’t for Russia, Syria might have been squandered by the rebellion(Al Jazeera n. pag). Russia hasn’t made it clear why they are helping, but many theories have been made. Some say that they are fighting in order to take down ISIS, or because most Russian citizens are Muslim, like Syrians (Menon par. 7). Either way, they are lending a helping hand by supplying weapons and soldiers (Menon par. 8). Iran has also taken Bashar Al-Assad’s side, fighting against rebel groups.

They are fighting mainly because of religious ties. The Assad Regime is made up of people belonging to the Alawi sect of Islam, and a majority of Iran also is a part of the Alawi sect (Al Jazeera n. pag). Iraq and Lebanon followed the same path (Al Jazeera n. pag). There are many groups that are focused on the same thing: taking down the Assad regime. The main force is the Free Syrian Army, but they are not the only one. Countries such as Turkey, Quatar, and Saudi Arabia have all fought against Assad (Al Jazeera n. pag). The Islamic extremist group known as ISIS or ISIL have been making headlines for their brutal executions and torture. They, along with Jabhat Faten Al-Sham, and the Syrian Democratic Forces, are in conflict with the Syrian government (Al Jazeera n. pag).

With all these groups battling against each other, a lot of land is riddled with war and violence. Usually the fighting occurs in unoccupied parts of Syria, but some has moved into major cities. The United Nations has requested that the Assad regime would try to avoid violence in urban areas where there are large populations of women and children. They have also tried to evacuate these civilians before the war puts their lives in danger (“To the Assad Regime, Russia, and Iran: It Is Your Noose around Syrian Civilians.” 50). In December of 2016, violence shifted into Aleppo, a huge city in northern Syria. People were in a panic, posting things on social media.

More and more fighting has moved into cities in the south (Khoury par. 8). This is putting a large amount of people in dangerous war zones. This year in July, Bashar Al-Assad and his army officially gained control of the capital, Demascus (Khoury par. 3). Demascus is located in southern Syria, near the countries of Lebanon, Jordan, and Israel. People are being pushed father south, and an increase of refugees to the previously stated countries is evident.

Around 270,000 Syrians fled from the south, which caused a problem (Khoury par. 7). Jordan has accepted over a million refugees since the start of the civil war in 2011, but recently closed their border(Khoury par. 8). After providing shelter, food, and jobs for these newcomers for so long, they realized the resources being spent. Israel also closed their border. They, along with Jordan, will continue to supply the refugees with tents and aid (Khoury par. 7).

Jordan and Israel are just two of the many countries that will no longer accept Syrian refugees. Finding a permanent home is very challenging. Germany, accepting millions, is one of the only European countries who accept these people today (Byman and Speakman 45). The refugees who have found a home are allowed to stay there. Refoulement, or the forced return of refugees to their previous home, was made illegal in the 1951 United Nations Refugee Convention (Byman and Speakman 46).

The United States has been known to be gracious in their acceptance in the past, but things have changed. When Donald Trump won the 2016 presidential election, he acted quickly on the problem of refugees. He made headlines with his comments on Syrian refugees. Trump placed a temporary ban on the income of refugees, and hasn’t let many in after it expired (Reidy 18). Under the American SAFE Act, additional screening of Syrian refugees is required before they are let in (Reidy 18).

This was created after the terrorist attack in Paris, which alarmed many people. The threat of terrorists entering into countries as refugees became much more believable and scary. This might have been the reason why the United States accepted a mere 1,682 Syrian refugees in 2016 (Reidy 19). When countries take actions similar to this, it makes the process of finding a home much harder.

What hit me the hardest were the stories of ordinary people having to abandon successful careers, homes, friends, family, and their belongings. When these people leave Syria, some of them are hopeless. War and violence has been surrounding them for months or years, and kids especially are traumatized. I began to imagine having to leave Omaha. Just like our project earlier in the year, I would have to pack everything I need into a backpack or suitcase. How can I fit years of joy and memories into a bag? Zahour Al-Wais and her family had to do exactly that.

They were forced to leave after all the violence that occurred following the teenagers’ protests. She fled to Lebanon, like many other Syrians, simply because it is close by. Lebanon placed almost no restraints on incoming refugees at first, but now Syrian refugees make up over a quarter of their population (Reidy n. pag). Zahour and her family were admitted into a refugee camp, living with hundreds of others (Reidy n. pag). The Al-Baarini family left in 2012, and were in constant search of a permanent home.

Luckily, the United Nations helped them relocate to Birmingham, England (Bulman and Hoddinott n. pag). But all was not well. What is a Syrian family supposed to do in an English speaking country? Families like the Al-Baarinis have to adjust to many new things. This includes a new culture, new food, a new language, a new school, and new friends. The Al-Baarini kids, who are in their early teens, had a tough time making new friends (Bulman and Hoddinott n. pag). Adjustments like this would be the hardest thing for me to do if I were to go through the refugee process.

The Syrian Civil War is an extremely complicated issue. It involves Russia, Lebanon, Iran, Iraq, and Syria against rebel groups such as the Free Syrian Army, Syrian Democratic Forces, and countries such as Turkey, Quatar, and Saudi Arabia. These groups have chosen sides sometimes because of religious ties, usually through Islamic sects. From the outside looking in, this conflict may just seem like a very long, deadly war that has been going on for six years.

But if a closer look is taken, a countless number of lives have been changed. Fighting that has moved into major urban areas have created millions of refugees, or people who are forced to leave their homes. Leaving all their belongings, they begin long trips to safety. They flee to countries nearby like Jordan or Israel, or far away like Germany of the United States. These journeys can be dangerous sometimes, taking many lives across oceans or deserts. But families do it for peace. To protect one another, it is worth it to leave everything.

After seven years of fighting, no peace is within sight. The Assad regime and rebels refuse to back down. But what is to be gained from this war? Both sides need to reevaluate what they want, because killing hundreds of thousands and displacing millions of people does not seem like a worthy cause to fight.

The Process of Refugee Resettlement