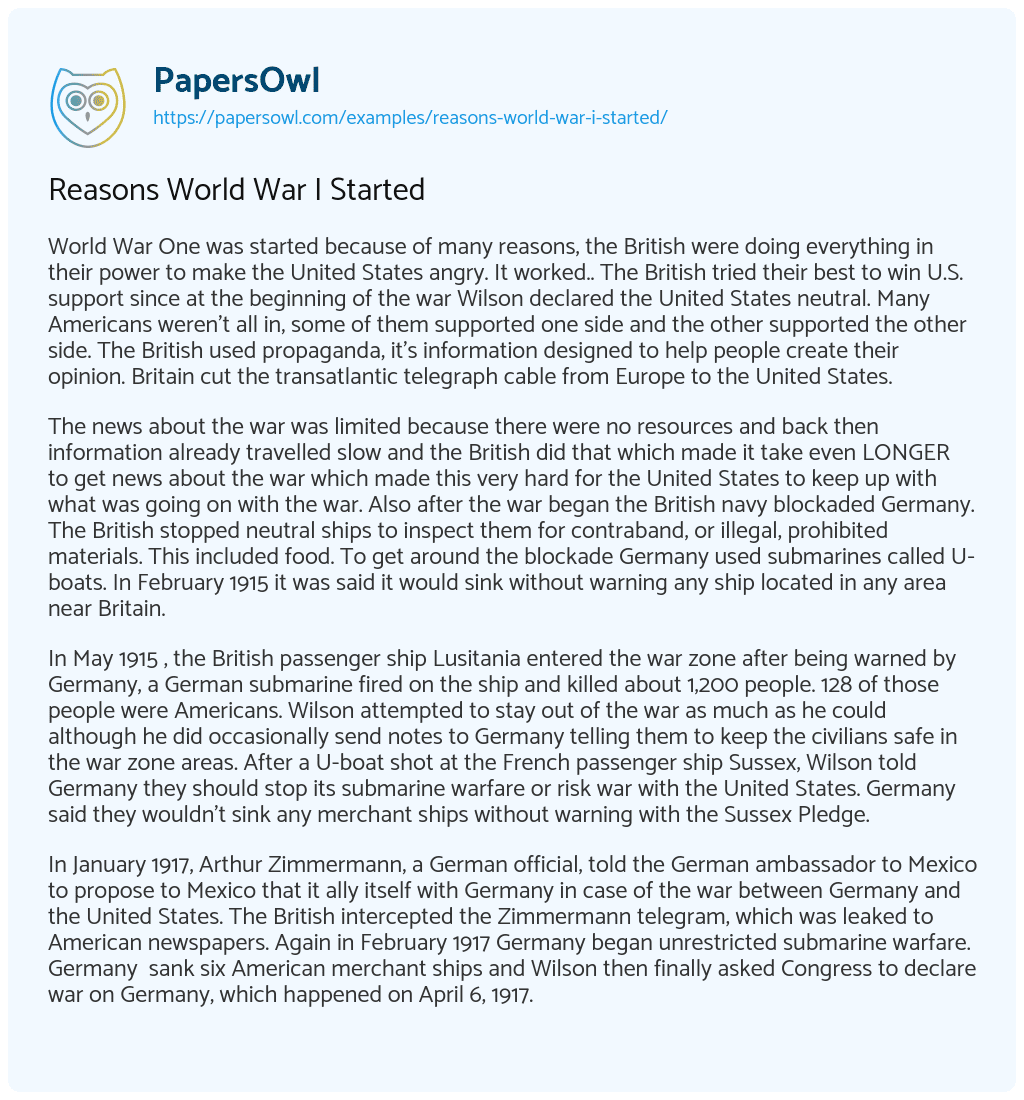 World War One was started because of many reasons, the British were doing everything in their power to make the United States angry. It worked.. The British tried their best to win U.S. support since at the beginning of the war Wilson declared the United States neutral. Many Americans weren’t all in, some of them supported one side and the other supported the other side. The British used propaganda, it’s information designed to help people create their opinion. Britain cut the transatlantic telegraph cable from Europe to the United States.

The news about the war was limited because there were no resources and back then information already travelled slow and the British did that which made it take even LONGER to get news about the war which made this very hard for the United States to keep up with what was going on with the war. Also after the war began the British navy blockaded Germany. The British stopped neutral ships to inspect them for contraband, or illegal, prohibited materials. This included food. To get around the blockade Germany used submarines called U-boats. In February 1915 it was said it would sink without warning any ship located in any area near Britain.

In May 1915 , the British passenger ship Lusitania entered the war zone after being warned by Germany, a German submarine fired on the ship and killed about 1,200 people. 128 of those people were Americans. Wilson attempted to stay out of the war as much as he could although he did occasionally send notes to Germany telling them to keep the civilians safe in the war zone areas. After a U-boat shot at the French passenger ship Sussex, Wilson told Germany they should stop its submarine warfare or risk war with the United States. Germany said they wouldn’t sink any merchant ships without warning with the Sussex Pledge.

In January 1917, Arthur Zimmermann, a German official, told the German ambassador to Mexico to propose to Mexico that it ally itself with Germany in case of the war between Germany and the United States. The British intercepted the Zimmermann telegram, which was leaked to American newspapers. Again in February 1917 Germany began unrestricted submarine warfare. Germany  sank six American merchant ships and Wilson then finally asked Congress to declare war on Germany, which happened on April 6, 1917.