Proto-Feminism in Literature: Chekhov and Hemingway 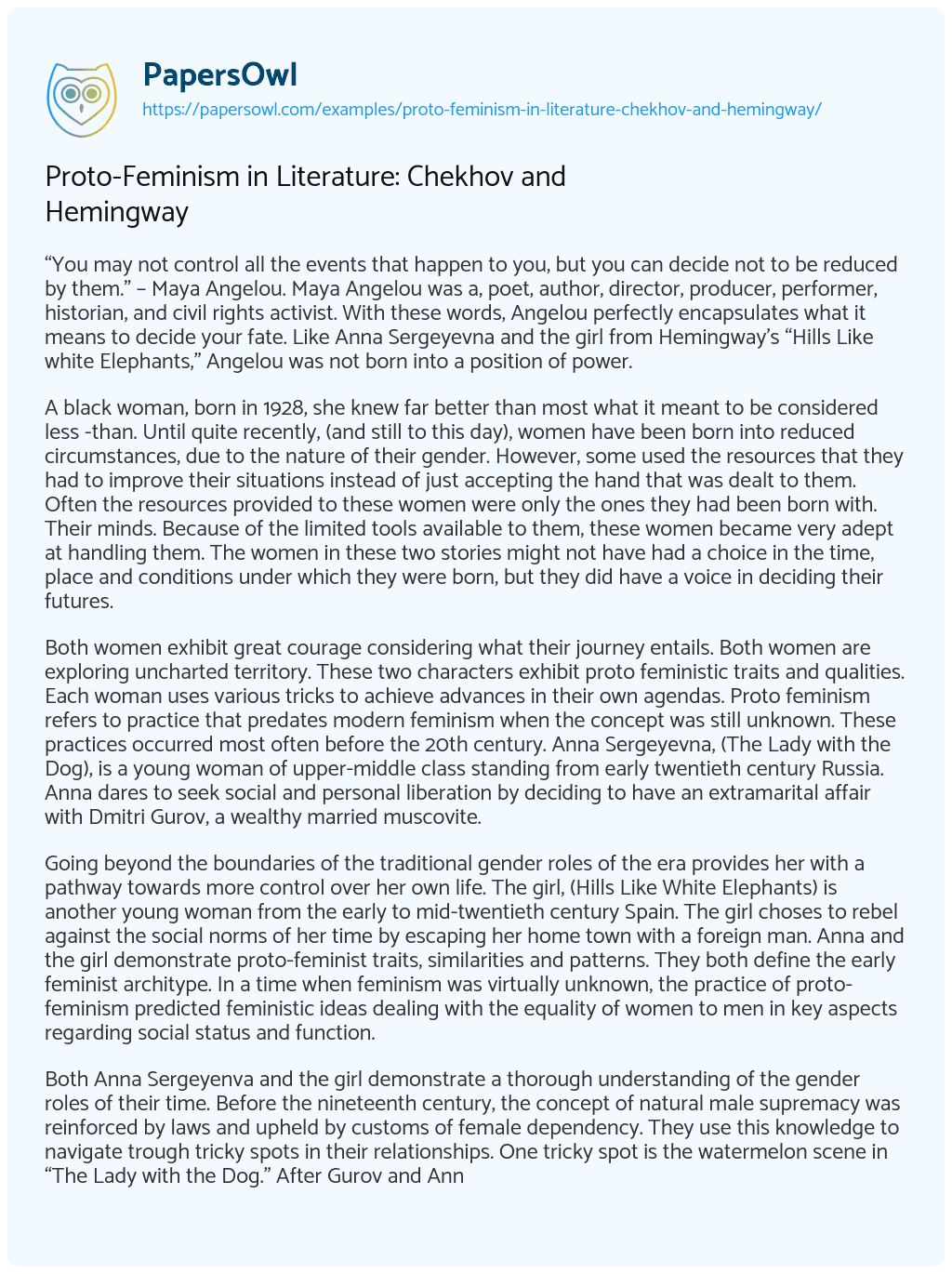 “You may not control all the events that happen to you, but you can decide not to be reduced by them.” – Maya Angelou. Maya Angelou was a, poet, author, director, producer, performer, historian, and civil rights activist. With these words, Angelou perfectly encapsulates what it means to decide your fate. Like Anna Sergeyevna and the girl from Hemingway’s “Hills Like white Elephants,” Angelou was not born into a position of power.

A black woman, born in 1928, she knew far better than most what it meant to be considered less -than. Until quite recently, (and still to this day), women have been born into reduced circumstances, due to the nature of their gender. However, some used the resources that they had to improve their situations instead of just accepting the hand that was dealt to them. Often the resources provided to these women were only the ones they had been born with. Their minds. Because of the limited tools available to them, these women became very adept at handling them. The women in these two stories might not have had a choice in the time, place and conditions under which they were born, but they did have a voice in deciding their futures.

Both women exhibit great courage considering what their journey entails. Both women are exploring uncharted territory. These two characters exhibit proto feministic traits and qualities. Each woman uses various tricks to achieve advances in their own agendas. Proto feminism refers to practice that predates modern feminism when the concept was still unknown. These practices occurred most often before the 20th century. Anna Sergeyevna, (The Lady with the Dog), is a young woman of upper-middle class standing from early twentieth century Russia. Anna dares to seek social and personal liberation by deciding to have an extramarital affair with Dmitri Gurov, a wealthy married muscovite.

Going beyond the boundaries of the traditional gender roles of the era provides her with a pathway towards more control over her own life. The girl, (Hills Like White Elephants) is another young woman from the early to mid-twentieth century Spain. The girl choses to rebel against the social norms of her time by escaping her home town with a foreign man. Anna and the girl demonstrate proto-feminist traits, similarities and patterns. They both define the early feminist architype. In a time when feminism was virtually unknown, the practice of proto-feminism predicted feministic ideas dealing with the equality of women to men in key aspects regarding social status and function.

Both Anna Sergeyenva and the girl demonstrate a thorough understanding of the gender roles of their time. Before the nineteenth century, the concept of natural male supremacy was reinforced by laws and upheld by customs of female dependency. They use this knowledge to navigate trough tricky spots in their relationships. One tricky spot is the watermelon scene in “The Lady with the Dog.” After Gurov and Anna have slept together, Anna appears mournful, in need of comforting and approval. “You will be the first to despise me now,” she says (Chekhov, 63). “God forgive me” (Chekhov, 63). Gurov responds to this by saying “You seem to feel you need to be forgiven.” This is exactly the type of response that Anna was looking for. She has put Gurov in a false position of power, therefore leading him to think that he is the one in control. Only he has the power to forgive her. She has made Gurov feel like he is in control of the situation. By giving him this feeling of power, she’s able to direct the dialogue in the way that she wants it to go.

The girl, from “Hills Like White Elephants,” exhibits a similar behavior when she and the American are waiting at the train station. She asks, “What shall we drink?” (Hemingway, 139), then lets the American order for her. This serves a purpose. It gives the American a small ego boost by implying that she is deferring to his superior judgment. She doesn’t actually need his help but is instead appealing to his desire to be needed. This softens the American for what the girl prepares to talk about, the difficult subject of her possible abortion. Just like Anna Sergeyevna, the girl is giving a small token of perceived power to her partner and in doing so gains control of the situation. She is now in a position where she is able to direct the conversation with more ease.

Both Anna Sergeyevna and the girl were the ones in control of their relationships. They dictate the direction in which their relationships evolve. They are able to manipulate their partners into situations that they would not have been likely to go to have gone to on their own. In “Hills Like White Elephants,” the girl keeps asking questions of the American. “And you really want to?” “And if I do it, you’ll be happy, and things will be like they were, and you’ll love me?” “If I do it, you won’t ever worry?” (Hemingway, 141). Through the use of her Socratic dialog, the girl puts herself in a position of power.

By asking these questions in an indirect manner, she forces the American to respond. This style that she uses is also very non-confrontational, which works out in her favor. She understands that in order to maneuver herself into a place of power, a direct approach may not have worked with the American. People, when confronting a topic, they don’t want to discuss, usually meet direct questioning with resistance or opposition. The girl’s subtle questioning disarms him and leads him to discuss topics that he might have intended to avoid. Anna also demonstrates her ability to exert control over the relationship.

In the opening scenes of “The Lady with The Dog” Anna appears the very picture of innocence and purity. Because she’s young and alone, and by dressing and acting like a lady, she’s the very picture of innocence. Although she doesn’t yet know Gurov, she knows his type. She’s looking for the kind of man who would easily be lured in by this façade, the type of man she knows how to manipulate. And it works. The way she dresses and looks, and the way she acts all appeals to Gurov, and he is drawn in.

Both characters rebel against traditional social norms for women in their time. Anna and the girl might have seemed malevolent. This is not the case. They are both incredibly intelligent women who are simply trying to get a leg up on the world with what little power they have. To rebel against the patriarchal constraints of their respective eras, they had to fight back in their own way. For Anna, it was the rebellion of an extramarital affair. It was unheard of in her time period to get a divorce, especially in Russia. So, the only way to even start to free herself from her the cage of societal and marital norms was to have an affair. This allowed her to begin to elevate her position in society.

The higher one was on the social ladder, the more power and control one commanded. This is one way to gain a sense of ownership and control in her own life. For the girl, it was the rebellion of having a relationship with a foreign man, outside of the confines of courtship, engagement or marriage. This was especially taboo in her country of origin. Coming from a predominantly Catholic country, it was unheard of to have this type of relationship. By rebelling against the norms set for women in this time, the girl demonstrated incredible courage, defiance, and a willingness to risk what people thought of her.

Both of the women in these two stories chose difficult journeys. The easier option would have been to just accept the norms expected of women in their time. However, they chose not to accept them. Because they did these things, they had the potential for better lives. If they hadn’t have done what they did, their lives would be like this (blah, blah), but because they did these things they found themselves in better places – now their lives are blah blah blah. Give specific examples for each woman. They did not quietly go about their lives. They took the difficult paths. They rebelled in their own ways and started building a road that future women could stand upon.

Proto-Feminism in Literature: Chekhov and Hemingway. (2021, Feb 24). Retrieved from https://papersowl.com/examples/proto-feminism-in-literature-chekhov-and-hemingway/

Women’s Role in Society and Literature

Feminism and Sexism in a Changing World