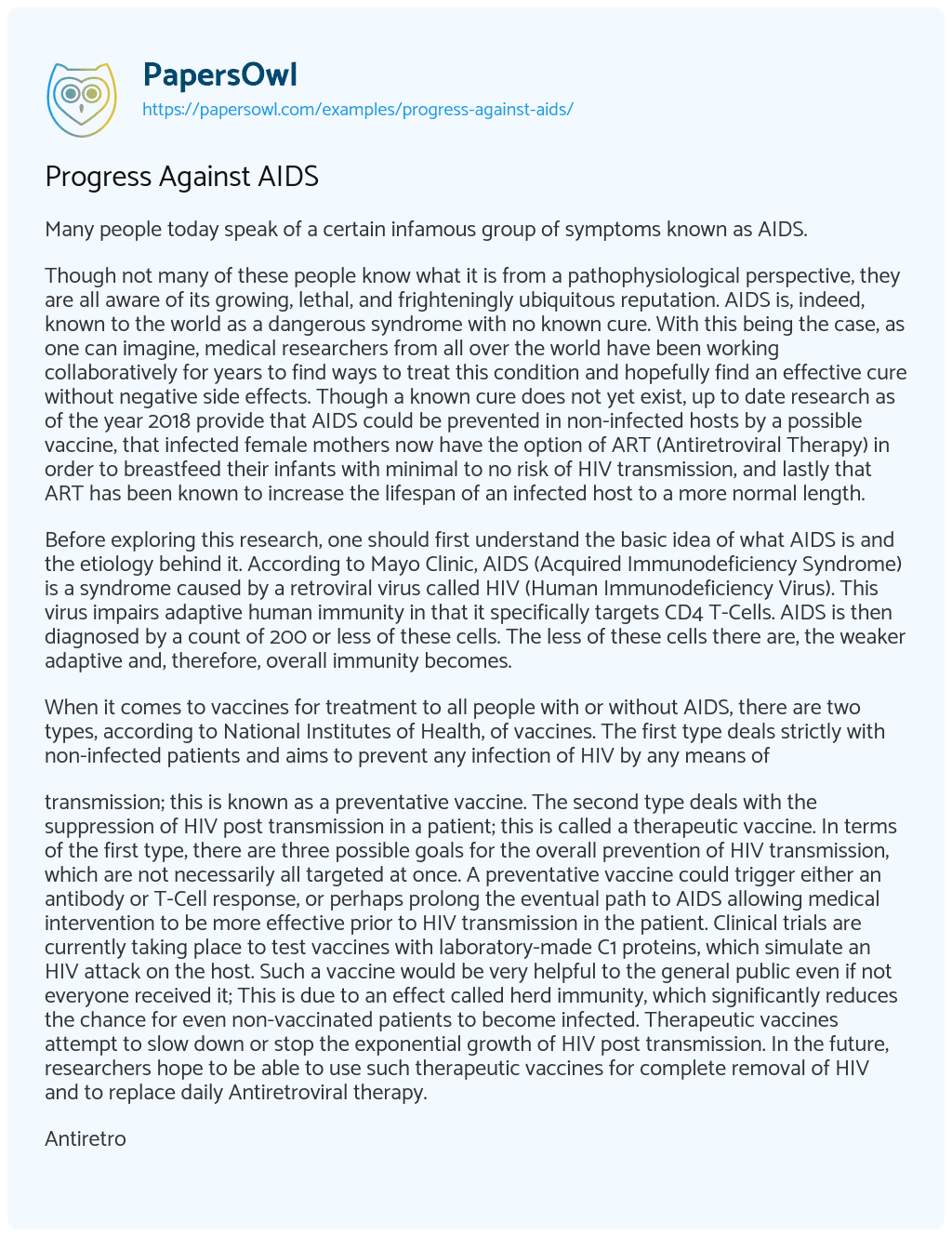 Many people today speak of a certain infamous group of symptoms known as AIDS.

Though not many of these people know what it is from a pathophysiological perspective, they are all aware of its growing, lethal, and frighteningly ubiquitous reputation. AIDS is, indeed, known to the world as a dangerous syndrome with no known cure. With this being the case, as one can imagine, medical researchers from all over the world have been working collaboratively for years to find ways to treat this condition and hopefully find an effective cure without negative side effects. Though a known cure does not yet exist, up to date research as of the year 2018 provide that AIDS could be prevented in non-infected hosts by a possible vaccine, that infected female mothers now have the option of ART (Antiretroviral Therapy) in order to breastfeed their infants with minimal to no risk of HIV transmission, and lastly that ART has been known to increase the lifespan of an infected host to a more normal length.

Before exploring this research, one should first understand the basic idea of what AIDS is and the etiology behind it. According to Mayo Clinic, AIDS (Acquired Immunodeficiency Syndrome) is a syndrome caused by a retroviral virus called HIV (Human Immunodeficiency Virus). This virus impairs adaptive human immunity in that it specifically targets CD4 T-Cells. AIDS is then diagnosed by a count of 200 or less of these cells. The less of these cells there are, the weaker adaptive and, therefore, overall immunity becomes.

When it comes to vaccines for treatment to all people with or without AIDS, there are two types, according to National Institutes of Health, of vaccines. The first type deals strictly with non-infected patients and aims to prevent any infection of HIV by any means of

transmission; this is known as a preventative vaccine. The second type deals with the suppression of HIV post transmission in a patient; this is called a therapeutic vaccine. In terms of the first type, there are three possible goals for the overall prevention of HIV transmission, which are not necessarily all targeted at once. A preventative vaccine could trigger either an antibody or T-Cell response, or perhaps prolong the eventual path to AIDS allowing medical intervention to be more effective prior to HIV transmission in the patient. Clinical trials are currently taking place to test vaccines with laboratory-made C1 proteins, which simulate an HIV attack on the host. Such a vaccine would be very helpful to the general public even if not everyone received it; This is due to an effect called herd immunity, which significantly reduces the chance for even non-vaccinated patients to become infected. Therapeutic vaccines attempt to slow down or stop the exponential growth of HIV post transmission. In the future, researchers hope to be able to use such therapeutic vaccines for complete removal of HIV and to replace daily Antiretroviral therapy.

Antiretroviral therapy is what physicians usually prescribe to patients post or eventual diagnosis of AIDS. Such drugs have been proven to be useful for both PMTCT and for granting already infected patients a second chance at a reasonably normal lifespan. They work in four different possible ways that all target viral replication in the HIV life cycle. Usually, Antiretroviral drugs consist of nucleoside and nucleotide reverse transcriptase inhibitors (NRTIs); Non-nucleoside reverse transcriptase inhibitors (NNRTIs), protease inhibitors (PIs), and drugs that interfere with viral entry, such as fusion inhibitors and CCR5 antagonists.

We will first consider the benefits that come from these drugs in terms of PMTCT.

PMTCT (Prevention of Mother to Child Transmission) is significant for mothers who don’t want to deprive their infants of the many benefits of breast milk, in spite of the fact that the mother has been diagnosed with AIDS. Prevention of infants in the womb acquiring an infection of HIV from the mother is also necessary to consider in terms of this area. According to AVERT, an international HIV and AIDS charity, Antiretroviral drugs have been proven to be effective in the prevention of this type of transmission. Statistically speaking, around 1.6 million mother-to-infant infections have been prevented by programs that provide such drugs.

Moreover, in terms of ART, patients with AIDS or a known HIV infection will have a significantly reduced lifespan, and ART gives them a second chance at a reasonably long lifespan in that it gets rid of a large amount of the virus and prevents most further replication. This is according to the World Health Organization.

AIDS is certainly a largely researched problem in modern medicine and for good reason. Though a cure for AIDS has not yet been found, we are well on the way toward succeeding. Millions of lives have been spared or prolonged so far on our difficult journey toward finding a cure for this far less than desirable syndrome caused by a pesky biological entity, and many more will be if it continues to progress. Let us all, therefore, do what we can to save millions of more lives by supporting research in this very important area of pathophysiology!

Morbidity of AIDS in Uganda