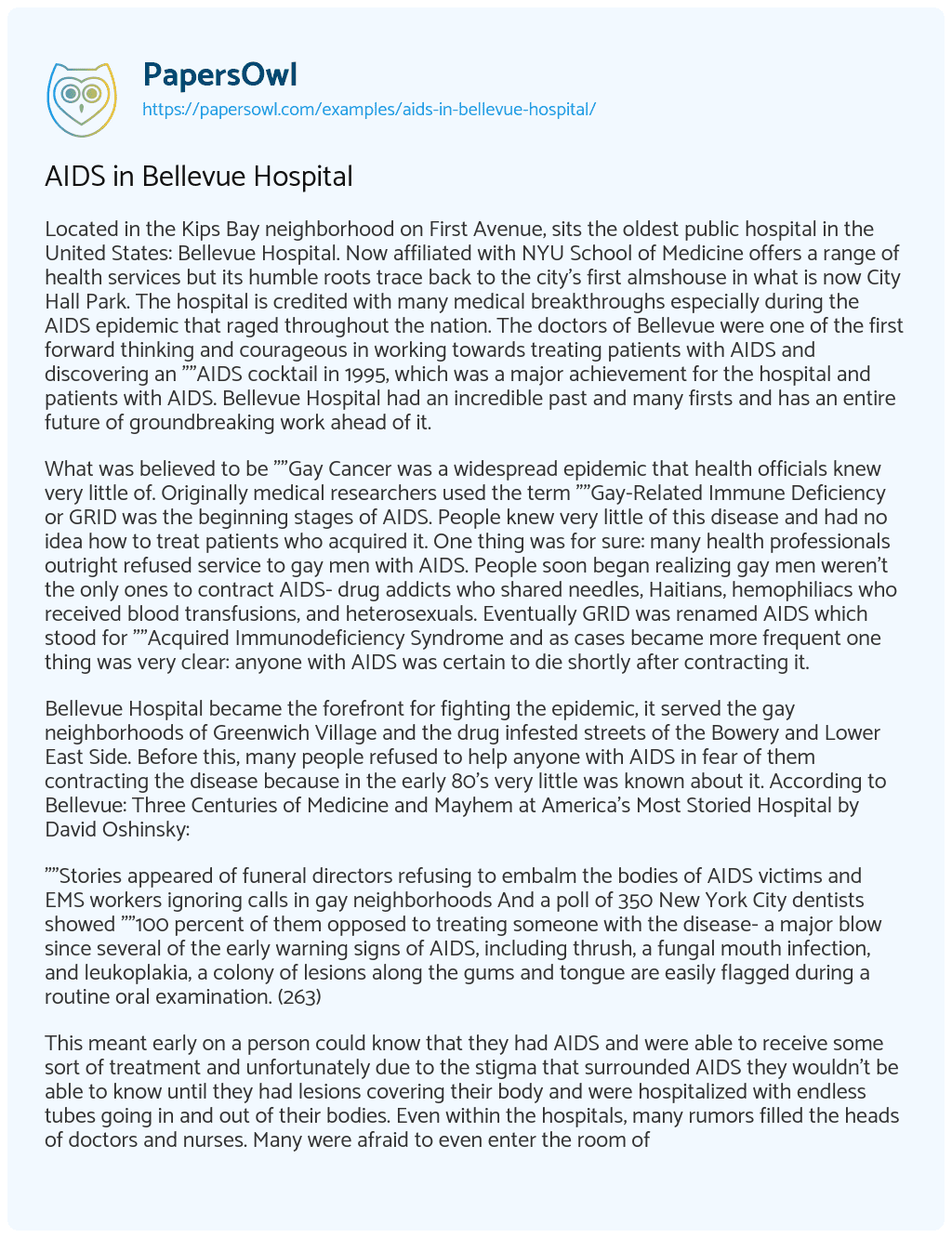 Located in the Kips Bay neighborhood on First Avenue, sits the oldest public hospital in the United States: Bellevue Hospital. Now affiliated with NYU School of Medicine offers a range of health services but its humble roots trace back to the city’s first almshouse in what is now City Hall Park. The hospital is credited with many medical breakthroughs especially during the AIDS epidemic that raged throughout the nation. The doctors of Bellevue were one of the first forward thinking and courageous in working towards treating patients with AIDS and discovering an “”AIDS cocktail in 1995, which was a major achievement for the hospital and patients with AIDS. Bellevue Hospital had an incredible past and many firsts and has an entire future of groundbreaking work ahead of it.

What was believed to be “”Gay Cancer was a widespread epidemic that health officials knew very little of. Originally medical researchers used the term “”Gay-Related Immune Deficiency or GRID was the beginning stages of AIDS. People knew very little of this disease and had no idea how to treat patients who acquired it. One thing was for sure: many health professionals outright refused service to gay men with AIDS. People soon began realizing gay men weren’t the only ones to contract AIDS- drug addicts who shared needles, Haitians, hemophiliacs who received blood transfusions, and heterosexuals. Eventually GRID was renamed AIDS which stood for “”Acquired Immunodeficiency Syndrome and as cases became more frequent one thing was very clear: anyone with AIDS was certain to die shortly after contracting it.

Bellevue Hospital became the forefront for fighting the epidemic, it served the gay neighborhoods of Greenwich Village and the drug infested streets of the Bowery and Lower East Side. Before this, many people refused to help anyone with AIDS in fear of them contracting the disease because in the early 80’s very little was known about it. According to Bellevue: Three Centuries of Medicine and Mayhem at America’s Most Storied Hospital by David Oshinsky:

“”Stories appeared of funeral directors refusing to embalm the bodies of AIDS victims and EMS workers ignoring calls in gay neighborhoods And a poll of 350 New York City dentists showed “”100 percent of them opposed to treating someone with the disease- a major blow since several of the early warning signs of AIDS, including thrush, a fungal mouth infection, and leukoplakia, a colony of lesions along the gums and tongue are easily flagged during a routine oral examination. (263)

This meant early on a person could know that they had AIDS and were able to receive some sort of treatment and unfortunately due to the stigma that surrounded AIDS they wouldn’t be able to know until they had lesions covering their body and were hospitalized with endless tubes going in and out of their bodies. Even within the hospitals, many rumors filled the heads of doctors and nurses. Many were afraid to even enter the room of a patient with AIDS- let alone treat them. Some believed they could possibly contract AIDS from the air they breathed or even a touch.

Few doctors were interested in discovering what AIDS was and how it effected patients. For example Dr. Friedman-Kien began to question patients in a way no one at the time had done before and wasn’t something he read in textbooks, medical journals, or learned about in medical school- he began to question their sex life. He realized many of the patients had frequented hookups in the city’s gay clubs and bathhouses. This would later lead to another Dr. Laubenstein who would advocate for the closing of gay bathhouses to slowdown the spread of AIDS- even though this also meant she would receive resentment from the gay community.

Although anyone who studied at Bellevue or worked there knew what it was: an AIDS directed hospital. none of the 1,500 yearly applicants for hospital’s seventy-eight prized residencies had ever expressed the slightest concerns about the disease. On the contrary, they seemed eager to tackle it. (266) The interesting thing about the new wave of doctors was that they didn’t fear they would contract AIDS but were interested in learning more about it and possibly treating patients with AIDS. Bellevue at the time was filled with doctors who were willing to put their own health in danger if it meant creating a cure or understanding what they were dealing with better.

After the laboratories in the National Cancer Institute in Rockville, Maryland discovered Human Immunodeficiency Virus (HIV) was what triggered AIDS, opened many doors for doctors worldwide to run trials and see what else they could discover about HIV and AIDS. In 1990, Dr. Fred Valentine of Bellevue Hospital and Dr. David Ho from the AIDS Research Center began trials to test different drugs and pharmaceuticals in order to stop or slow down HIV in patients. What they eventually discovered was although expensive and complicated it was extremely effective and allowed for people with AIDS to lead a normal life. In 2000, the hospital had seen more patients with AIDS in outpatient clinics than within its wards which was deemed a win for everyone.

Bellevue: Three Centuries of Medicine and Mayhem at America’s Most Storied Hospital by David Oshinsky did an incredible job of describing the AIDS epidemic and Bellevue Hospital on the frontlines working tirelessly to find a cure. The doctors of Bellevue put all they could in the work against AIDS. Oshinsky gave readers an inside look on the epidemic and how not only Bellevue chose to help those with AIDS, but all health professionals whether their response was beneficial to the cause or not. Before the brave work of the doctors at Bellevue, people with AIDS were certain to die immediately after but thanks to them people can live long and beautiful lives.

The Aids Epidemic Shaped the Late Development of the United States