The Aids Epidemic Shaped the Late Development of the United States 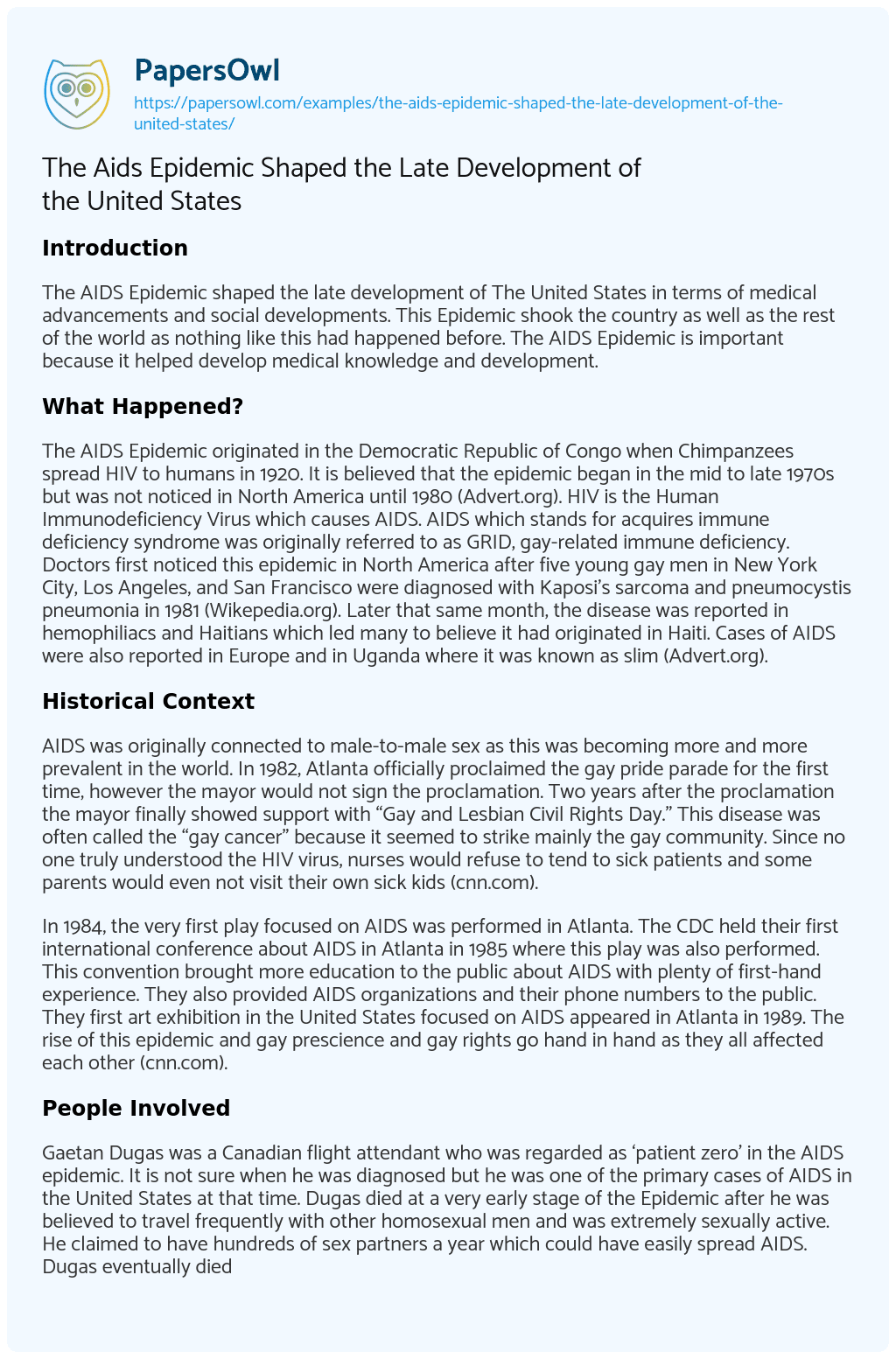 The AIDS Epidemic originated in the Democratic Republic of Congo when Chimpanzees spread HIV to humans in 1920. It is believed that the epidemic began in the mid to late 1970s but was not noticed in North America until 1980 (Advert.org). HIV is the Human Immunodeficiency Virus which causes AIDS. AIDS which stands for acquires immune deficiency syndrome was originally referred to as GRID, gay-related immune deficiency. Doctors first noticed this epidemic in North America after five young gay men in New York City, Los Angeles, and San Francisco were diagnosed with Kaposi’s sarcoma and pneumocystis pneumonia in 1981 (Wikepedia.org). Later that same month, the disease was reported in hemophiliacs and Haitians which led many to believe it had originated in Haiti. Cases of AIDS were also reported in Europe and in Uganda where it was known as slim (Advert.org).

AIDS was originally connected to male-to-male sex as this was becoming more and more prevalent in the world. In 1982, Atlanta officially proclaimed the gay pride parade for the first time, however the mayor would not sign the proclamation. Two years after the proclamation the mayor finally showed support with “Gay and Lesbian Civil Rights Day.” This disease was often called the “gay cancer” because it seemed to strike mainly the gay community. Since no one truly understood the HIV virus, nurses would refuse to tend to sick patients and some parents would even not visit their own sick kids (cnn.com).

In 1984, the very first play focused on AIDS was performed in Atlanta. The CDC held their first international conference about AIDS in Atlanta in 1985 where this play was also performed. This convention brought more education to the public about AIDS with plenty of first-hand experience. They also provided AIDS organizations and their phone numbers to the public. They first art exhibition in the United States focused on AIDS appeared in Atlanta in 1989. The rise of this epidemic and gay prescience and gay rights go hand in hand as they all affected each other (cnn.com).

Gaetan Dugas was a Canadian flight attendant who was regarded as ‘patient zero’ in the AIDS epidemic. It is not sure when he was diagnosed but he was one of the primary cases of AIDS in the United States at that time. Dugas died at a very early stage of the Epidemic after he was believed to travel frequently with other homosexual men and was extremely sexually active. He claimed to have hundreds of sex partners a year which could have easily spread AIDS. Dugas eventually died in March 1984 due to his AIDS-related kidney failure (wikepedia.org). An influential person in the AIDS epidemic was the first major public figure to acquire AIDS, Rock Hudson. He was a movie star who died in 1985 after hiding his illness for much of the time until just before his death. He turned AIDS into a more global conversation after beginning debate in the media and public and homosexuality and HIV (huffingtonpost.com).

The AIDS Epidemic could have easily killed more people than it did if the doctors had not contained the Epidemic. If doctors had chosen to not research the HIV virus as much as they did, people with HIV today would still have a death sentence instead of having the treatment options that exist. Many people tried to contain AIDS by simply encouraging condoms with male to male sex. There were many ads made encouraging this practice(smithsonianmag.com). Many people discriminated against races, sexuality, and sex as those most at risk for HIV. If these discriminations had been believed for the entire epidemic, many more would have been infected if they had seen themselves as less likely to become infected by HIV(avert.org).

The AIDS Epidemic greatly changed the attitude of the country at the time of its occurrence. Many people wanted to be involved in the decision making in how to deal with this terrible disease. This type of attitude was already slowly developing but the AIDS Epidemic greatly accelerated this process. The patient was given more freedom to decide their own course of treatment based on their own judgement of the risks and benefits. The patient also accepted that they were approaching death much easier after helping to choose their choice of treatment. The communities affected by this disease began to access new drugs without waiting for the approval of multiple committees and trials. (jme.bmj.com).

The medical community advanced greatly during the time of the Epidemic. Some of these advances affected the medical community forever. One of these advances were the laws on doctor-patient confidentiality. After many patient’s medical information was spread without consent of the patient, laws on confidentiality were created to protect the patient and they are still very important to patients today (jme.bmj.com). This Epidemic also created more open conversations on safe-sex because HIV was mainly spread through unsafe sex. During this epidemic people did not want to discuss this subject with their sexual partners but over time they became more and more open on talking with their partners about HIV.

The AIDS Epidemic shaped the future of the United States of America. The medical community made tremendous advancements and created a safer and more trusted relationship between doctor and patient. The entire social community also became more open and accepting to the gays and lesbians. Without this tragic Epidemic, these medical and social advanced would have taken a much longer time to occur and develop.”

The Aids Epidemic Shaped the Late Development of the United States. (2021, Apr 21). Retrieved from https://papersowl.com/examples/the-aids-epidemic-shaped-the-late-development-of-the-united-states/

The Economic Effect on AIDS Treatment

Opioid Epidemic and Chronic Pain Within the United States