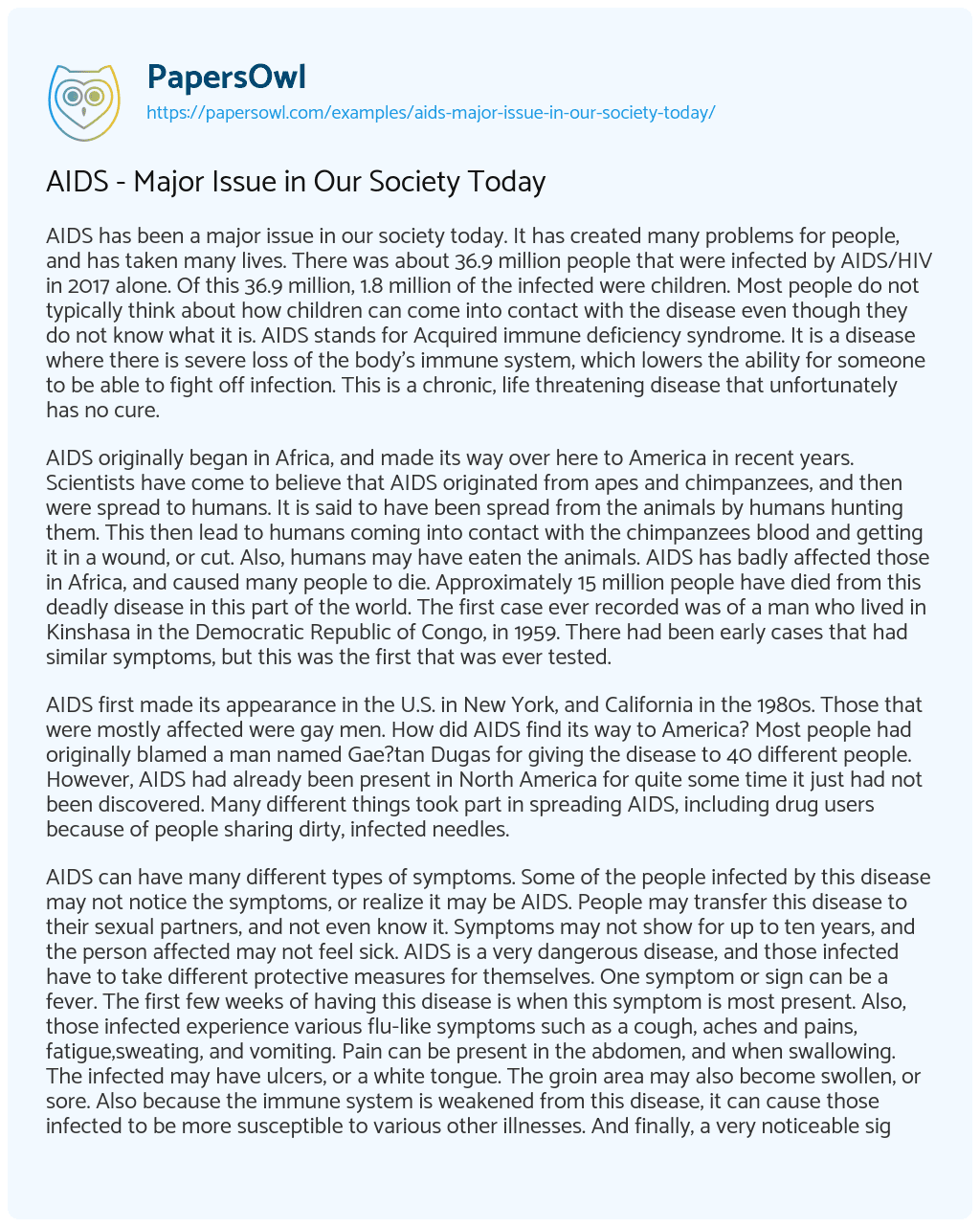 AIDS has been a major issue in our society today. It has created many problems for people, and has taken many lives. There was about 36.9 million people that were infected by AIDS/HIV in 2017 alone. Of this 36.9 million, 1.8 million of the infected were children. Most people do not typically think about how children can come into contact with the disease even though they do not know what it is. AIDS stands for Acquired immune deficiency syndrome. It is a disease where there is severe loss of the body’s immune system, which lowers the ability for someone to be able to fight off infection. This is a chronic, life threatening disease that unfortunately has no cure.

AIDS originally began in Africa, and made its way over here to America in recent years. Scientists have come to believe that AIDS originated from apes and chimpanzees, and then were spread to humans. It is said to have been spread from the animals by humans hunting them. This then lead to humans coming into contact with the chimpanzees blood and getting it in a wound, or cut. Also, humans may have eaten the animals. AIDS has badly affected those in Africa, and caused many people to die. Approximately 15 million people have died from this deadly disease in this part of the world. The first case ever recorded was of a man who lived in Kinshasa in the Democratic Republic of Congo, in 1959. There had been early cases that had similar symptoms, but this was the first that was ever tested.

AIDS first made its appearance in the U.S. in New York, and California in the 1980s. Those that were mostly affected were gay men. How did AIDS find its way to America? Most people had originally blamed a man named Gae?tan Dugas for giving the disease to 40 different people. However, AIDS had already been present in North America for quite some time it just had not been discovered. Many different things took part in spreading AIDS, including drug users because of people sharing dirty, infected needles.

AIDS can have many different types of symptoms. Some of the people infected by this disease may not notice the symptoms, or realize it may be AIDS. People may transfer this disease to their sexual partners, and not even know it. Symptoms may not show for up to ten years, and the person affected may not feel sick. AIDS is a very dangerous disease, and those infected have to take different protective measures for themselves. One symptom or sign can be a fever. The first few weeks of having this disease is when this symptom is most present. Also, those infected experience various flu-like symptoms such as a cough, aches and pains, fatigue,sweating, and vomiting. Pain can be present in the abdomen, and when swallowing. The infected may have ulcers, or a white tongue. The groin area may also become swollen, or sore. Also because the immune system is weakened from this disease, it can cause those infected to be more susceptible to various other illnesses. And finally, a very noticeable sign is severe weight loss.

Although there is no cure for AIDS, there are several different types of medication that can be taken to help relieve the symptoms and slow down the disease from completely taking over the body. One treatment that can be done is antiretroviral therapy (ART). It is a combination of three or more drugs. This therapy can greatly slow down the effects of the disease, and prevent other illnesses. It can also help to extend the lifespan of those who have AIDS. One type of medication that is given to AIDS patients is Nucleoside reverse transcriptase inhibitors (NRTI). These type of drugs is used to stop the disease from duplicating, and slow it from spreading throughout the body. Some of the types include Abacavir, didanosine, tenofovir, and several others. Some of the side effects of these drugs include fever, rashes, and nausea. Another kind of FDA-approved drugs are Protease Inhibitors. This kind interrupts the replication of the disease later in the cycle. Some drugs of this type of medication include: Atazanavir, Indinavir, and Lopinavir. Side effects of this kind of medication can include depression, drowsiness, and possible yellowing of the skin.

AIDS is a deadly disease and once you have come into contact with it there is no cure to get rid of it. However, there are some measures you can take to ensure that you do not come into contact with this virus. AIDS is transferred from person to person when someone else who has the disease exposes you to their blood, semen, or vaginal fluids. AIDS is usually transmitted through sex, or sharing needles with someone infected. To prevent this disease you can take protective measures such as wearing a condom. Some people do not often think about other consequences to having sex, like stds, but only think of pregnancy. This can cause partners to decide to not have protected sex without thinking about stds as a contributing factor. Therefore, while injecting drugs an individual must use a clean, sterile needle in order to prevent the transfer of blood which may lead to a person obtaining the virus, AIDS. Some people who are heavy drug users have shared needles before with friends or others they may have not know had been infected with the disease. Also, AIDS can be prevented by you and your partner, or any person you are with, by frequently being tested by a medical professional.

AIDS is a dangerous, and life threatening disease to be infected by. It has caused many lives to be lost. It causes those infected to have a shortened life span, and becoming more susceptible to various infections, and diseases. This disease started in Africa, a place where resources and medications are not available, and took many lives. There may not be a cure, but there are many different types of medications out there to slow the disease down. AIDS is a deadly disease, we need to help further bring awareness to help prevent it from affecting more people.

AIDS – One of the Deadliest Pandemics in History