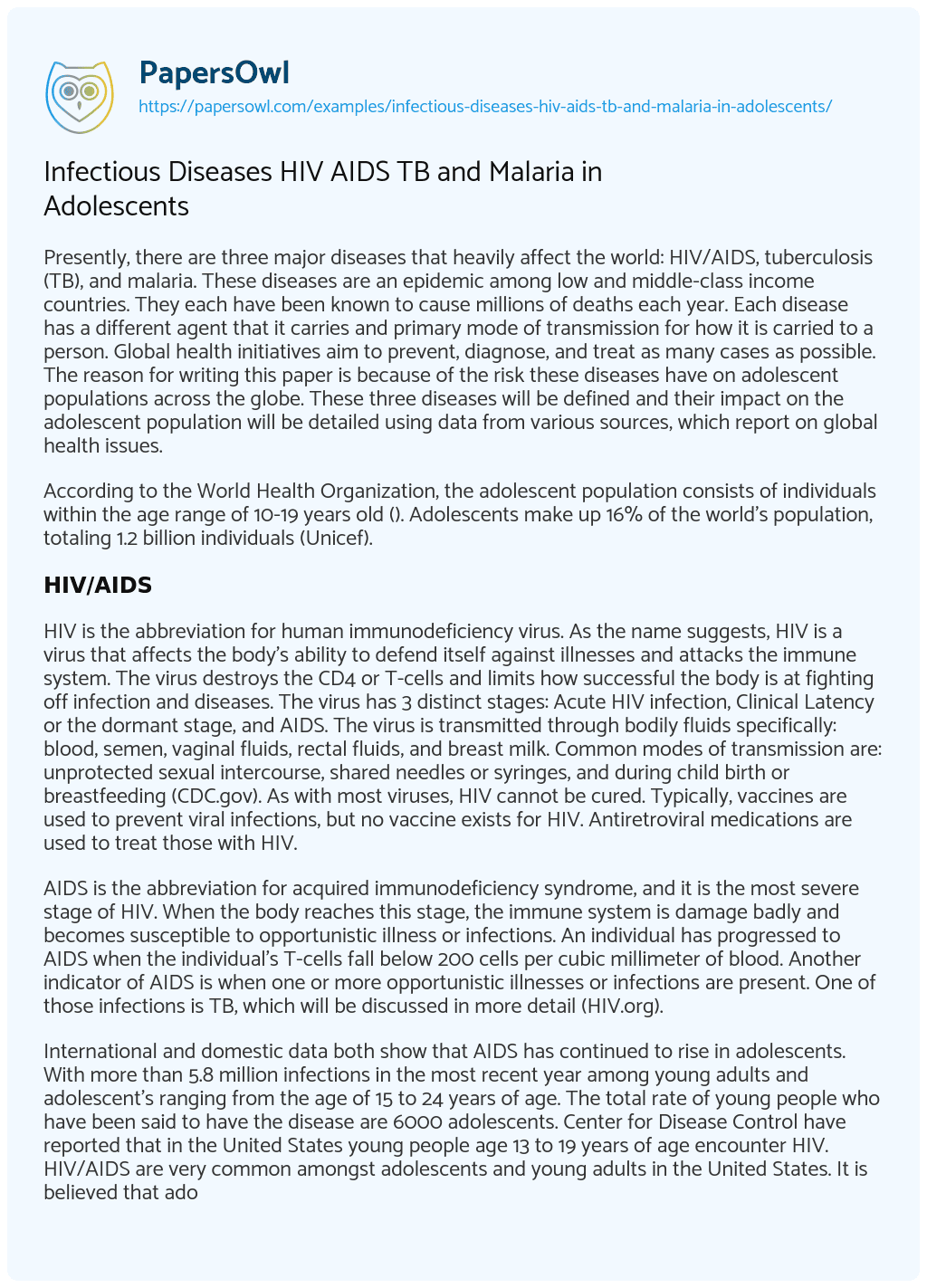 Presently, there are three major diseases that heavily affect the world: HIV/AIDS, tuberculosis (TB), and malaria. These diseases are an epidemic among low and middle-class income countries. They each have been known to cause millions of deaths each year. Each disease has a different agent that it carries and primary mode of transmission for how it is carried to a person. Global health initiatives aim to prevent, diagnose, and treat as many cases as possible. The reason for writing this paper is because of the risk these diseases have on adolescent populations across the globe. These three diseases will be defined and their impact on the adolescent population will be detailed using data from various sources, which report on global health issues.

According to the World Health Organization, the adolescent population consists of individuals within the age range of 10-19 years old (). Adolescents make up 16% of the world’s population, totaling 1.2 billion individuals (Unicef).

HIV is the abbreviation for human immunodeficiency virus. As the name suggests, HIV is a virus that affects the body’s ability to defend itself against illnesses and attacks the immune system. The virus destroys the CD4 or T-cells and limits how successful the body is at fighting off infection and diseases. The virus has 3 distinct stages: Acute HIV infection, Clinical Latency or the dormant stage, and AIDS. The virus is transmitted through bodily fluids specifically: blood, semen, vaginal fluids, rectal fluids, and breast milk. Common modes of transmission are: unprotected sexual intercourse, shared needles or syringes, and during child birth or breastfeeding (CDC.gov). As with most viruses, HIV cannot be cured. Typically, vaccines are used to prevent viral infections, but no vaccine exists for HIV. Antiretroviral medications are used to treat those with HIV.

AIDS is the abbreviation for acquired immunodeficiency syndrome, and it is the most severe stage of HIV. When the body reaches this stage, the immune system is damage badly and becomes susceptible to opportunistic illness or infections. An individual has progressed to AIDS when the individual’s T-cells fall below 200 cells per cubic millimeter of blood. Another indicator of AIDS is when one or more opportunistic illnesses or infections are present. One of those infections is TB, which will be discussed in more detail (HIV.org).

International and domestic data both show that AIDS has continued to rise in adolescents. With more than 5.8 million infections in the most recent year among young adults and adolescent’s ranging from the age of 15 to 24 years of age. The total rate of young people who have been said to have the disease are 6000 adolescents. Center for Disease Control have reported that in the United States young people age 13 to 19 years of age encounter HIV. HIV/AIDS are very common amongst adolescents and young adults in the United States. It is believed that adolescents among those who are 13 to 24 years have been reported to the national HIV/AIDS reporting systems.

Tuberculosis is a bacterial infection that affects, primarily, the lungs, but it has also been reported to attack the kidney, spine, and brain. The disease is caused by mycobacterium tuberculosis. TB is an airborne bacteria and spreads when an uninfected person ingest air particles from a person infected through coughing, speaking, or singing. TB is a potentially fatal infectious disease, and it is most deadly and contagious when it attacks the lungs or throat. TB is also one of the opportunistic illnesses present in individuals with AIDS and is the leading cause of death in those infected with AIDS. There are two stages in TB: latent TB infection and TB disease. TB infection has little to no visible symptoms, but if it is left untreated, it can develop into TB disease. TB disease has symptoms such as: coughing, chest pain, fatigue, loss of appetite, and possibly coughing up blood.

TB ranks very highly in the number of deaths per year caused by a disease. The number of TB has consistently been above a million, globally.

AIDS – One of the Deadliest Pandemics in History