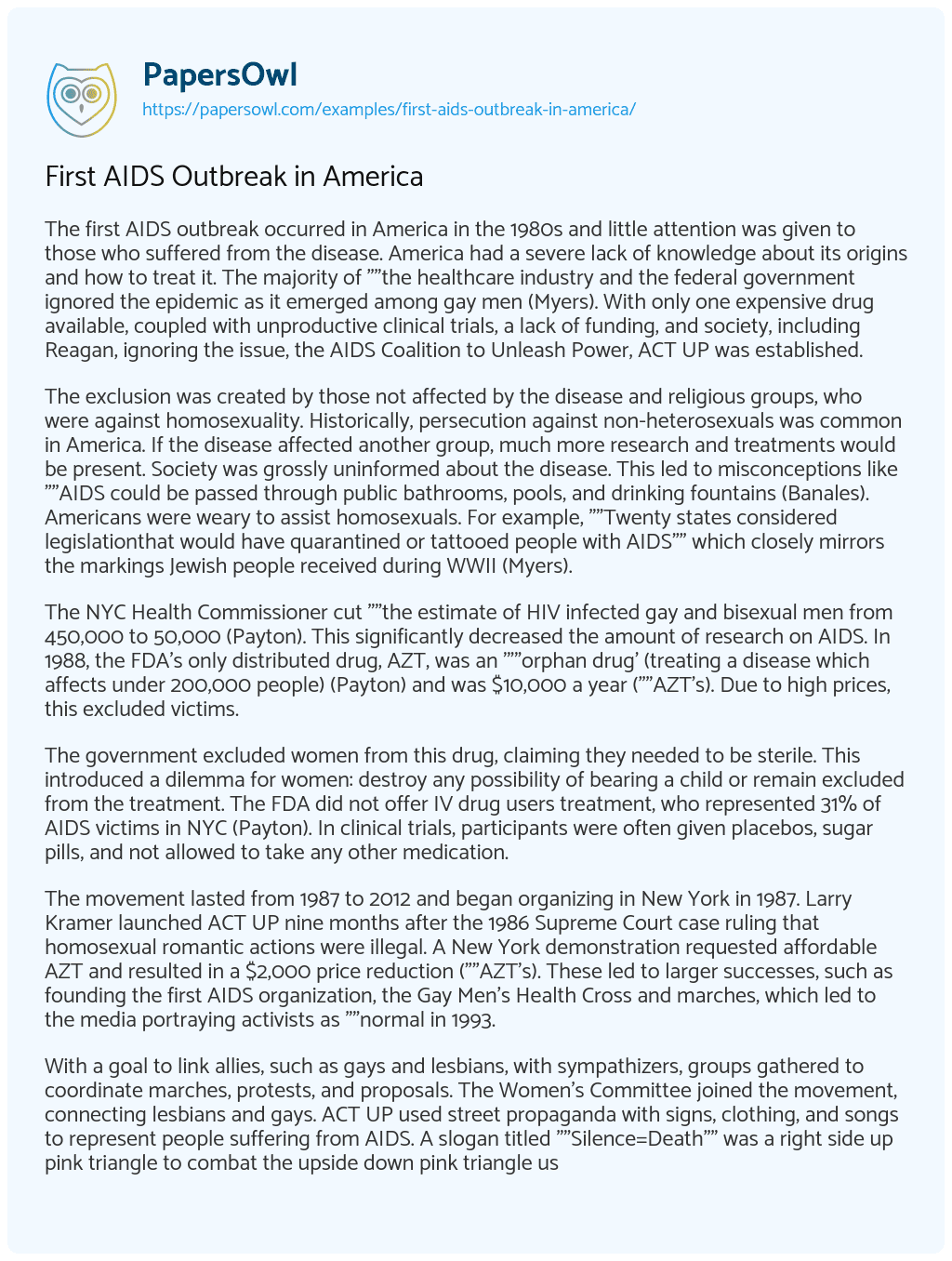 The first AIDS outbreak occurred in America in the 1980s and little attention was given to those who suffered from the disease. America had a severe lack of knowledge about its origins and how to treat it. The majority of “”the healthcare industry and the federal government ignored the epidemic as it emerged among gay men (Myers). With only one expensive drug available, coupled with unproductive clinical trials, a lack of funding, and society, including Reagan, ignoring the issue, the AIDS Coalition to Unleash Power, ACT UP was established.

The exclusion was created by those not affected by the disease and religious groups, who were against homosexuality. Historically, persecution against non-heterosexuals was common in America. If the disease affected another group, much more research and treatments would be present. Society was grossly uninformed about the disease. This led to misconceptions like “”AIDS could be passed through public bathrooms, pools, and drinking fountains (Banales). Americans were weary to assist homosexuals. For example, “”Twenty states considered legislationthat would have quarantined or tattooed people with AIDS”” which closely mirrors the markings Jewish people received during WWII (Myers).

The government excluded women from this drug, claiming they needed to be sterile. This introduced a dilemma for women: destroy any possibility of bearing a child or remain excluded from the treatment. The FDA did not offer IV drug users treatment, who represented 31% of AIDS victims in NYC (Payton). In clinical trials, participants were often given placebos, sugar pills, and not allowed to take any other medication.

The movement lasted from 1987 to 2012 and began organizing in New York in 1987. Larry Kramer launched ACT UP nine months after the 1986 Supreme Court case ruling that homosexual romantic actions were illegal. A New York demonstration requested affordable AZT and resulted in a $2,000 price reduction (“”AZT’s). These led to larger successes, such as founding the first AIDS organization, the Gay Men’s Health Cross and marches, which led to the media portraying activists as “”normal in 1993.

With a goal to link allies, such as gays and lesbians, with sympathizers, groups gathered to coordinate marches, protests, and proposals. The Women’s Committee joined the movement, connecting lesbians and gays. ACT UP used street propaganda with signs, clothing, and songs to represent people suffering from AIDS. A slogan titled “”Silence=Death”” was a right side up pink triangle to combat the upside down pink triangle used to identify gays in Nazi concentration camps. In the 1988 Civil Rights Commission hearing about “”the right to discriminate against people with AIDS”” ACT UP activists sat in the audience wearing clown masks and silently protested (Piven).

Initially activists wanted to reflect Martin Luther King’s strategy of peace within Civil Rights, and to ally with The Early Gay Liberation Movement. The strategies were to remain non-violent and project victims as “”normal. They protested outside churches to “”Stop the church”” and end religious discrimination (Piven). Many affinity groups, such as “”the Mary’s carried open caskets from Washington Square to the New York Republican Party, and around the White House to visualize the affects from restricting research and funding on AIDS (Piven). One shirt said, “”If I die from AIDS, no burial, drop me off at the steps of the FDA (“”Fight).

With time, the demographics within the movement changed as more women and people of color were diagnosed with AIDS. Issues of gender and race added to ones already present in the movement. Women were initially diagnosed posthumously, and a new slogan was adopted: ‘””Women don’t get AIDS. They just die from it’ (Piven). Females wanted the same treatment and opportunities as men and African Americans wanted the same quality of treatment as white males.

The outcomes from this movement were spread over time. Cheaper treatment and more trials became available for men, women, and people of color. In 1995-1996, there was a scientific breakthrough. Protease inhibitors suppressed the viruses in the bloodstream of AIDS victims, reducing deaths (Piven). This method was more affordable, and the first treatment was titled Saquinavir. Unfortunately, the split with race broadened as more African Americans accounted for deaths from AIDS. In 1999, ACT UP was supporting third world countries that were unable to afford treatment. But, the government opposed the plan from South Africa to produce expensive drugs to fight the disease in Africa (Piven). ACT UP did dissipate, but smaller groups still remain and advocate for those suffering with HIV and AIDS.