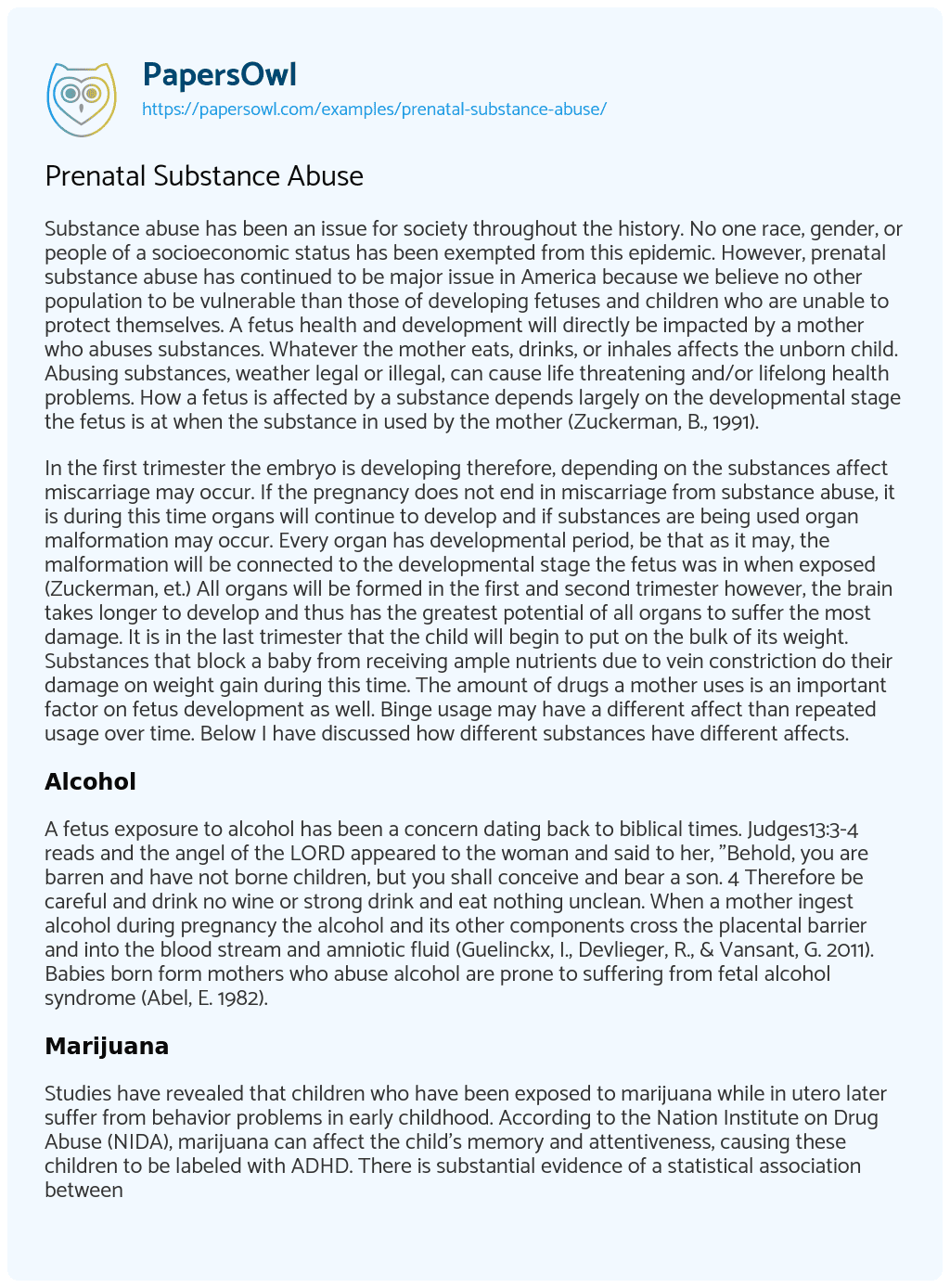 Substance abuse has been an issue for society throughout the history. No one race, gender, or people of a socioeconomic status has been exempted from this epidemic. However, prenatal substance abuse has continued to be major issue in America because we believe no other population to be vulnerable than those of developing fetuses and children who are unable to protect themselves. A fetus health and development will directly be impacted by a mother who abuses substances. Whatever the mother eats, drinks, or inhales affects the unborn child. Abusing substances, weather legal or illegal, can cause life threatening and/or lifelong health problems. How a fetus is affected by a substance depends largely on the developmental stage the fetus is at when the substance in used by the mother (Zuckerman, B., 1991).

In the first trimester the embryo is developing therefore, depending on the substances affect miscarriage may occur. If the pregnancy does not end in miscarriage from substance abuse, it is during this time organs will continue to develop and if substances are being used organ malformation may occur. Every organ has developmental period, be that as it may, the malformation will be connected to the developmental stage the fetus was in when exposed (Zuckerman, et.) All organs will be formed in the first and second trimester however, the brain takes longer to develop and thus has the greatest potential of all organs to suffer the most damage. It is in the last trimester that the child will begin to put on the bulk of its weight. Substances that block a baby from receiving ample nutrients due to vein constriction do their damage on weight gain during this time. The amount of drugs a mother uses is an important factor on fetus development as well. Binge usage may have a different affect than repeated usage over time. Below I have discussed how different substances have different affects.

A fetus exposure to alcohol has been a concern dating back to biblical times. Judges13:3-4 reads and the angel of the LORD appeared to the woman and said to her, “Behold, you are barren and have not borne children, but you shall conceive and bear a son. 4 Therefore be careful and drink no wine or strong drink and eat nothing unclean. When a mother ingest alcohol during pregnancy the alcohol and its other components cross the placental barrier and into the blood stream and amniotic fluid (Guelinckx, I., Devlieger, R., & Vansant, G. 2011). Babies born form mothers who abuse alcohol are prone to suffering from fetal alcohol syndrome (Abel, E. 1982).

Studies have revealed that children who have been exposed to marijuana while in utero later suffer from behavior problems in early childhood. According to the Nation Institute on Drug Abuse (NIDA), marijuana can affect the child’s memory and attentiveness, causing these children to be labeled with ADHD. There is substantial evidence of a statistical association between marijuana smoking among pregnant women and low birth weight (NIDA.,2018, July 12).

Women considering using medical marijuana to treat nausea while pregnant should not do so without checking with their health care provider. Cocaine While cocaine’s effects are usually immediate and short term on the mother, the effect it can have on a fetus may last a lifetime. Babies born addicted to cocaine come with a myriad of both physical and mental health issues.

According to the National Institute on Drug Abuse, exposure to cocaine in the womb can lead to subtle, yet significant, deficits later in children. The consequences of using cocaine include heart attacks, respiratory failure, strokes, and seizures along with other life-threatening health problems can also be passed to an unborn baby. Opiates Opiates rapidly pass the placenta, with drug equilibration among the mother and the fetus. Infants born to mothers who use opiates do not have birth defects due to the effects of the opiates, but due to the effects of the opiates do have impaired growth, smaller head size, and significant neurobehavioral dysfunction due to withdrawal.