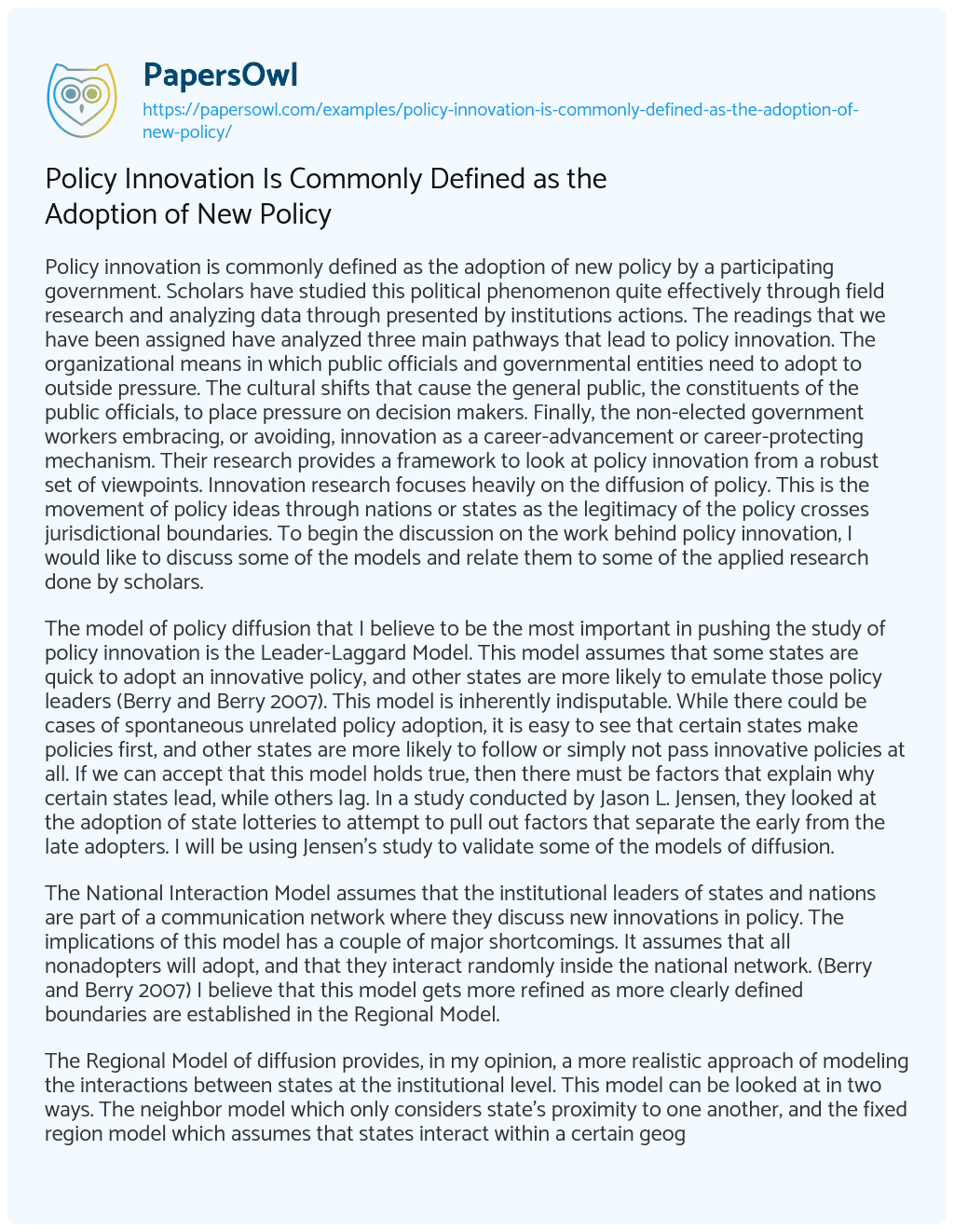 Policy innovation is commonly defined as the adoption of new policy by a participating government. Scholars have studied this political phenomenon quite effectively through field research and analyzing data through presented by institutions actions. The readings that we have been assigned have analyzed three main pathways that lead to policy innovation. The organizational means in which public officials and governmental entities need to adopt to outside pressure. The cultural shifts that cause the general public, the constituents of the public officials, to place pressure on decision makers. Finally, the non-elected government workers embracing, or avoiding, innovation as a career-advancement or career-protecting mechanism. Their research provides a framework to look at policy innovation from a robust set of viewpoints. Innovation research focuses heavily on the diffusion of policy. This is the movement of policy ideas through nations or states as the legitimacy of the policy crosses jurisdictional boundaries. To begin the discussion on the work behind policy innovation, I would like to discuss some of the models and relate them to some of the applied research done by scholars.

The model of policy diffusion that I believe to be the most important in pushing the study of policy innovation is the Leader-Laggard Model. This model assumes that some states are quick to adopt an innovative policy, and other states are more likely to emulate those policy leaders (Berry and Berry 2007). This model is inherently indisputable. While there could be cases of spontaneous unrelated policy adoption, it is easy to see that certain states make policies first, and other states are more likely to follow or simply not pass innovative policies at all. If we can accept that this model holds true, then there must be factors that explain why certain states lead, while others lag. In a study conducted by Jason L. Jensen, they looked at the adoption of state lotteries to attempt to pull out factors that separate the early from the late adopters. I will be using Jensen’s study to validate some of the models of diffusion.

The National Interaction Model assumes that the institutional leaders of states and nations are part of a communication network where they discuss new innovations in policy. The implications of this model has a couple of major shortcomings. It assumes that all nonadopters will adopt, and that they interact randomly inside the national network. (Berry and Berry 2007) I believe that this model gets more refined as more clearly defined boundaries are established in the Regional Model.

The Regional Model of diffusion provides, in my opinion, a more realistic approach of modeling the interactions between states at the institutional level. This model can be looked at in two ways. The neighbor model which only considers state’s proximity to one another, and the fixed region model which assumes that states interact within a certain geographic region. Researchers have studied the effects of state proximity by analyzing the adoption of state lotteries. After completing their study, these researchers found no correlation between the proximity of states and their rate of adoption. (Jensen 2003) A critique that I would offer for use of state lotteries to measure the effect of spatial pressure as a means of explaining diffusion is that lotteries offer little competitive advantage between states. If Jensen could have analyzed a policy that people would move for such as; marijuana legalization, lower taxes, or policies that improve public schools, I believe that a stronger correlation could exists.

There are also cultural aspects that have been studied to attempt to explain why same states adopt policy early, and others adopt policy late. This is represented in the Isomorphism Model of policy diffusion. This model takes into accounts the similarity between states as a mechanism to explain diffusion, and stresses the ideological, social and political, similarities. (Berry and Berry 2007) In Jensen’s study he tested several hypotheses to consider these ideological factors in the adoption of innovative policies. The liberalness of the institution, liberalness of the constituents, and secular makeup and behaviors of the constituents in the states were all considerations that these hypotheses encompasses. The liberalness of the institutions and constituents both yielded a positive correlation with the likelihood of early adoption. The analysis of the secular makeup and behaviors of the constituents in the jurisdiction yielded separate results. Jensen found that if jurisdictions had a high number of certain religions were more likely to be early adopters. The behaviors did not yield such clear results. “Church attendance was not found to be a predictor of adoption” (Jensen 2003) On its face, the measurement of this behavior would make someone assume that this would be a substantial indicator of likelihood adoption. I think in future research it would make sense to correct for cultural indicators with non-social controls, such as stance on fiscal policy. My rational behind this is that rational behind an individual’s public policy belief system and the rational that shape their rational behind their religious beliefs are most likely separate in issues not relating to their religions core beliefs. The fiscal benefit of state lotteries might be enough to override a negative stance towards gambling in their religion. Jensen’s study already laid solid groundwork to expand on this finding but performed no follow up to my knowledge.

Innovation in our Life

Functionalism Theory in Adoption and Types of Adoption

Intercountry Adoption (Ica), Adoption of a Child of Another Country