Poems as an Interesting Way to Communicate 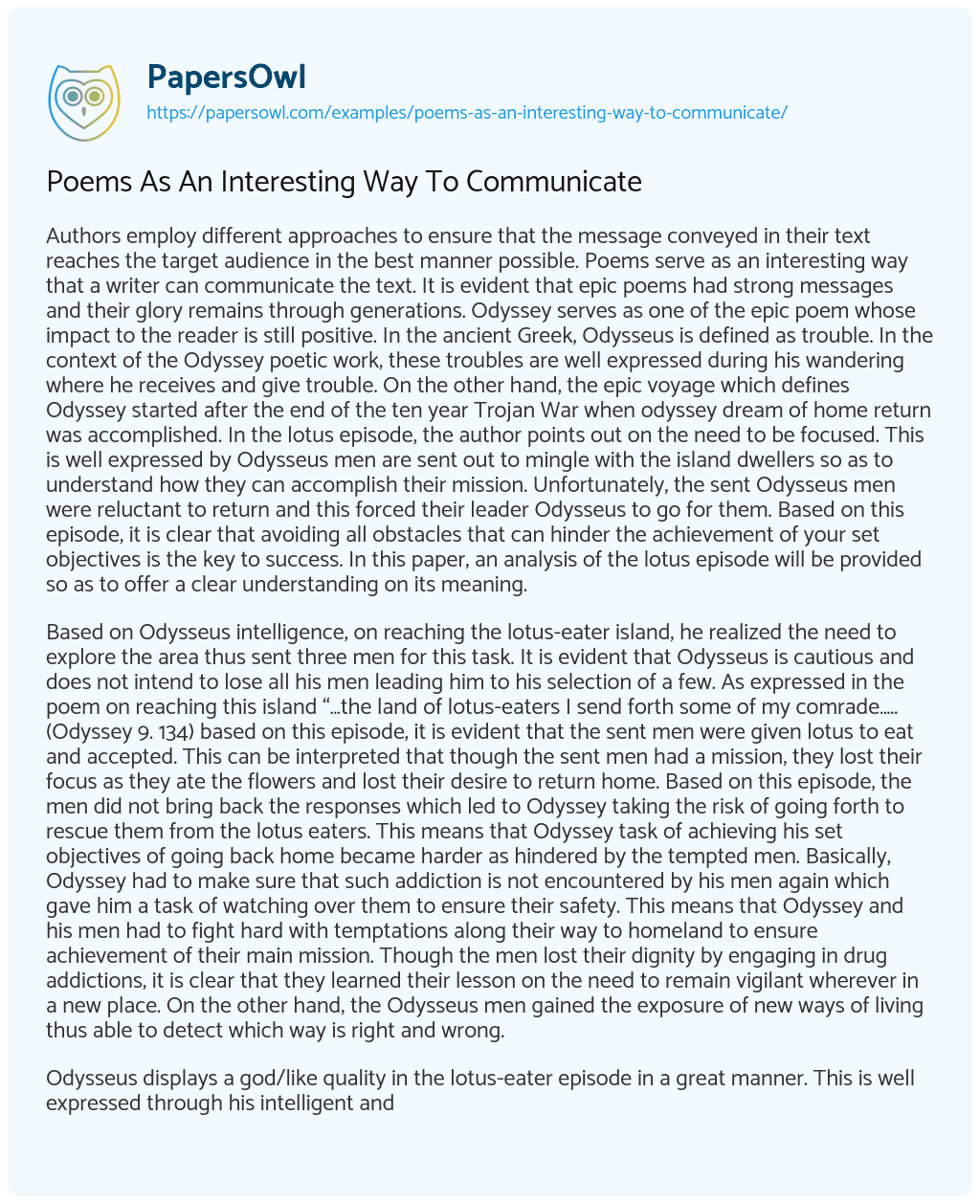 Authors employ different approaches to ensure that the message conveyed in their text reaches the target audience in the best manner possible. Poems serve as an interesting way that a writer can communicate the text. It is evident that epic poems had strong messages and their glory remains through generations. Odyssey serves as one of the epic poem whose impact to the reader is still positive. In the ancient Greek, Odysseus is defined as trouble. In the context of the Odyssey poetic work, these troubles are well expressed during his wandering where he receives and give trouble. On the other hand, the epic voyage which defines Odyssey started after the end of the ten year Trojan War when odyssey dream of home return was accomplished. In the lotus episode, the author points out on the need to be focused. This is well expressed by Odysseus men are sent out to mingle with the island dwellers so as to understand how they can accomplish their mission. Unfortunately, the sent Odysseus men were reluctant to return and this forced their leader Odysseus to go for them. Based on this episode, it is clear that avoiding all obstacles that can hinder the achievement of your set objectives is the key to success. In this paper, an analysis of the lotus episode will be provided so as to offer a clear understanding on its meaning.

Based on Odysseus intelligence, on reaching the lotus-eater island, he realized the need to explore the area thus sent three men for this task. It is evident that Odysseus is cautious and does not intend to lose all his men leading him to his selection of a few. As expressed in the poem on reaching this island “…the land of lotus-eaters I send forth some of my comrade….. (Odyssey 9. 134) based on this episode, it is evident that the sent men were given lotus to eat and accepted. This can be interpreted that though the sent men had a mission, they lost their focus as they ate the flowers and lost their desire to return home. Based on this episode, the men did not bring back the responses which led to Odyssey taking the risk of going forth to rescue them from the lotus eaters. This means that Odyssey task of achieving his set objectives of going back home became harder as hindered by the tempted men. Basically, Odyssey had to make sure that such addiction is not encountered by his men again which gave him a task of watching over them to ensure their safety. This means that Odyssey and his men had to fight hard with temptations along their way to homeland to ensure achievement of their main mission. Though the men lost their dignity by engaging in drug addictions, it is clear that they learned their lesson on the need to remain vigilant wherever in a new place. On the other hand, the Odysseus men gained the exposure of new ways of living thus able to detect which way is right and wrong.

Odysseus displays a god/like quality in the lotus-eater episode in a great manner. This is well expressed through his intelligent and the potential to inspire his men. Based on this episode, loyalty, discipline, wit and brevity characteristic are also demonstrated by Odysseus. Based on the episode, the three men who were sent did not respond to Odysseus which made him to go looking for them thus brave character expressed. On the other hand, based on his intelligent, Odyssey only sent a small number of his men to the island of lotus eaters. This means that, though the sent men lost their focus, the left number were still inspired by their leader thus remained focused and their urge to get back to their home was not lost. Based on this episode, it is clear that loyalty and focus serves as the guide to achieving the set objectives. This is well expressed by the determinations of Odysseus to reach his homeland and the need to achieve this with all his men intact as quoted “….. We reached the island, told the crew to stay back and watch over the ship as I walked with some of the men to the island…….. (9. 134-137) this is a clear indication that Odysseus physically dragged the men to the ship and even promised to watch over them so as not to return to the lotus-eater island. This is a clear indication that he was ready to pay any cost in the course of their return home.

Metaphors, personification, epic similes are among many other figure of speech that odyssey employs. Based on the Lotus-eater episode, the lotus-eater tone is melancholic and objective. It is evident that the atmosphere in this episode is very is very surreal which makes the events in the poem sound like a dream to the men involved. This is well expressed in the event that the men sent by Odysseus were reluctant to come back and when Odysseus went for them, they were not willing to continue with their mission base on their current addiction. As it is put in the Odyssey, “the Lotus-eaters intention was not to kill my men but genuinely gave them the lotus fruits which my men embraced with grace…… (9. 100-110) based on the afore-mentioned quote, the Lotus-eater was determined to ensure that the sent men lose their focus and abandons their mission.

In respect to the Lotus-eaters, the theme of hospitality and curiosity are well expressed. As Odysseus anticipated, the islanders were very hospitable to his men and that is why they welcomed them in their Lotus-eating behavior. On the other hand, the curiosity of his men to know more about the way of islanders living led them to their trap. From this perspective, it is clear that the Odyssey will lack its meaning of continuity without this episode. This is in line with the fact that this episode serves as a pathway through which trouble are gained and given back by Odysseus during his wandering period. Basically, the Odyssey poem is vested so much in the adventurous moments of Odysseus in search of his way back home. Based on this approach, it is clear that the Lotus-eater episode express the experiences encountered in one stage of his adventurous moments. The fact that he and his men encountered challenges during theirs stop at the island is a clear indication that lessons were learnt which enhanced the entire group’s way of interpreting their anticipated challenges at other stop overs. This brings in the relevance of this episode in the Odyssey.

A poem serves as a nice way of communicating a text. Reading and understanding the poem is very essential as it enhances effective interpretation of the text. Odyssey is a poem with a very important message if well interpreted. The need to remain focused in any mission serves as the major lesson that the reader can gain from the text. It is evident that Odysseus employs different traits to handle the challenges ahead of him. Based on his intelligence, it is clear that remedies to the challenges are quickly realized which in return makes his mission much easier to accomplish. Based on the Lotus-eater episode, it is wise to conclude that the heroic virtues are well respected which inspires Odysseus and the urge to continue with the mission of returning home is redefined.

Poems As An Interesting Way To Communicate. (2020, Nov 03). Retrieved from https://papersowl.com/examples/poems-as-an-interesting-way-to-communicate/

Can a Hero have Flaws?

Essay about the Odyssey