What you Redeem, i Will Write (About) 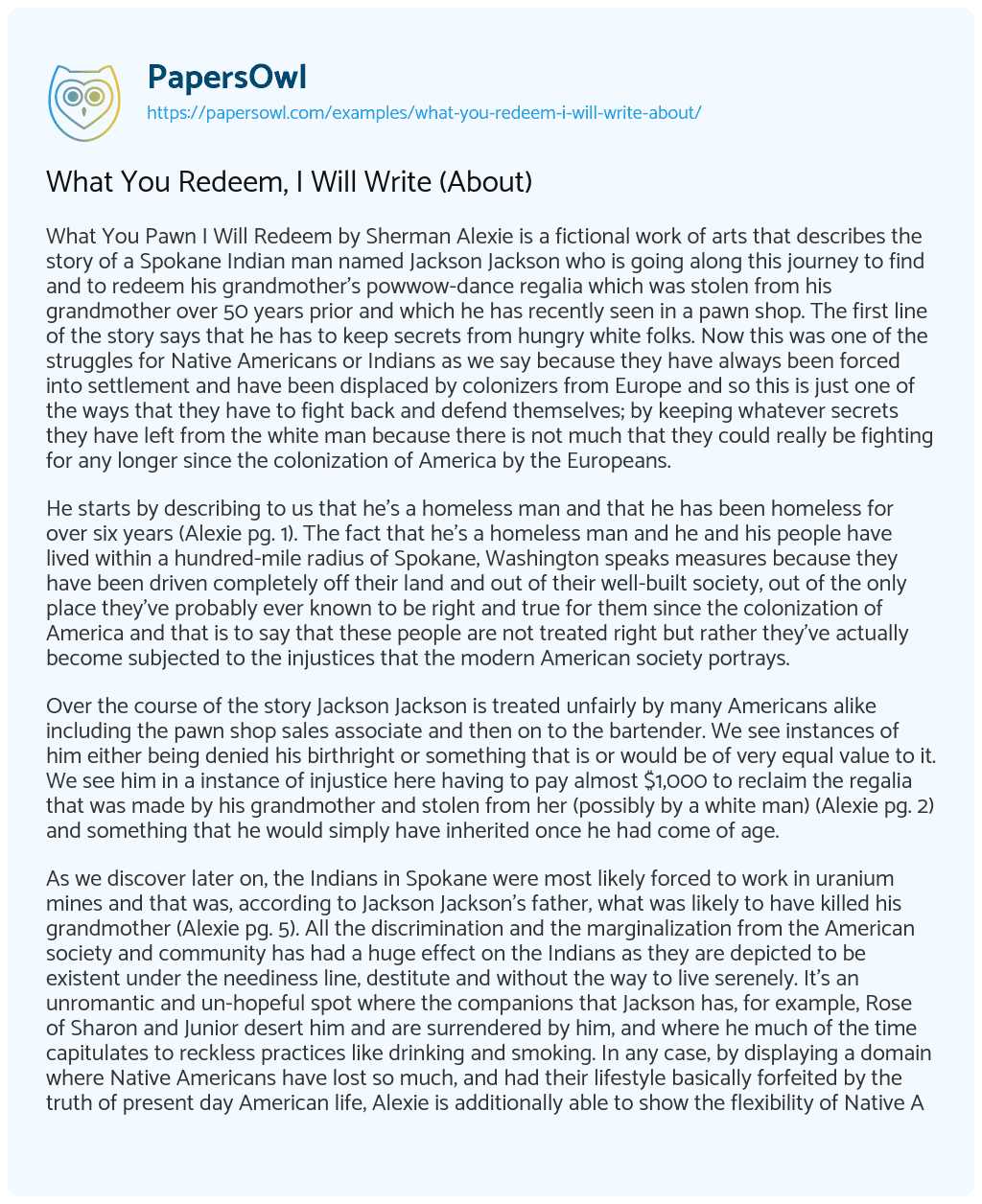 What You Pawn I Will Redeem by Sherman Alexie is a fictional work of arts that describes the story of a Spokane Indian man named Jackson Jackson who is going along this journey to find and to redeem his grandmother’s powwow-dance regalia which was stolen from his grandmother over 50 years prior and which he has recently seen in a pawn shop. The first line of the story says that he has to keep secrets from hungry white folks. Now this was one of the struggles for Native Americans or Indians as we say because they have always been forced into settlement and have been displaced by colonizers from Europe and so this is just one of the ways that they have to fight back and defend themselves; by keeping whatever secrets they have left from the white man because there is not much that they could really be fighting for any longer since the colonization of America by the Europeans.

He starts by describing to us that he’s a homeless man and that he has been homeless for over six years (Alexie pg. 1). The fact that he’s a homeless man and he and his people have lived within a hundred-mile radius of Spokane, Washington speaks measures because they have been driven completely off their land and out of their well-built society, out of the only place they’ve probably ever known to be right and true for them since the colonization of America and that is to say that these people are not treated right but rather they’ve actually become subjected to the injustices that the modern American society portrays.

Over the course of the story Jackson Jackson is treated unfairly by many Americans alike including the pawn shop sales associate and then on to the bartender. We see instances of him either being denied his birthright or something that is or would be of very equal value to it. We see him in a instance of injustice here having to pay almost $1,000 to reclaim the regalia that was made by his grandmother and stolen from her (possibly by a white man) (Alexie pg. 2) and something that he would simply have inherited once he had come of age.

As we discover later on, the Indians in Spokane were most likely forced to work in uranium mines and that was, according to Jackson Jackson’s father, what was likely to have killed his grandmother (Alexie pg. 5). All the discrimination and the marginalization from the American society and community has had a huge effect on the Indians as they are depicted to be existent under the neediness line, destitute and without the way to live serenely. It’s an unromantic and un-hopeful spot where the companions that Jackson has, for example, Rose of Sharon and Junior desert him and are surrendered by him, and where he much of the time capitulates to reckless practices like drinking and smoking. In any case, by displaying a domain where Native Americans have lost so much, and had their lifestyle basically forfeited by the truth of present day American life, Alexie is additionally able to show the flexibility of Native American culture to find ways of recovery via their enduring legend, narrating, humor and making the day-to-day more magical all the while being so discriminated and marginalized.

As the story is perused, we can’t slight Jackson’s genuine references to the chronicled setting of mercilessness, misuse, and evacuation that have since quite a while prior depicted the indigenous contribution in America. Anyway Jackson’s light hearted personality and sharp entertaining tendency make him less like an object of pity, and progressively reminiscent of the Shakespearean deceive—one whose sharp recognitions, though consistently removed as the immaterial ramblings of a trick, by somehow get the epitome of truth as it is experienced inside the story, much like the narrative of Caliban from Shakespeare’s The Tempest who has been kidnapped by Prospero and Miranda in his alleged “land” that ought to be conceded him by his mom. His likeness of a fish-like beast is nearly a similar way that the white colonials would have seen the Native Americans and the oppression of Caliban by Prospero in The Tempest is really intended to totally spoof the subjugation of the Native Americans by the European colonials.

As it peruses, Jackson’s main goal to recoup his grandmother’s formal attire can be caricatured by the recorded setting of the Spokane tribe. Correspondingly as Jackson’s grandmother’s formal attire was stolen and has transformed into a thing for obtainment, the Spokane persevered through an exceptionally prolonged stretch of time of maltreatment by virtue of white colonials and the U.S. government. Before he recovers the formal attire, Jackson is commonly imperceptible as a noteworthy part of the dejected masses in Seattle: “Homeless Indians are everywhere in Seattle. We’re common and boring, and you walk right on by us, with maybe a look of anger or disgust or even sadness.” (Alexie pg. 1). Be that as it may, when Jackson wears his grandmother’s formal attire close to the finish of the story, his triumph is both actually and socially basic. Rejoined with his history and his inheritance, he ends up being promptly perceptible. While before he had gone unnoticed, when wearing the formal attire he really stops traffic: “Pedestrians stopped. Cars stopped. The city stopped. They all watched me dance with my grandmother. I was my grandmother, dancing.” (Alexie pg. 23). This moment hints a move in Jackson’s status from an indistinct, ignored vagrant to a presentation of triumph, in any case short. He has found a home; a place of having a spot and comfort in his grandmother’s formal attire.

Sherman Alexie’s ‘What You Pawn I Will Redeem’ is a story about the money related adversities of a Spokane Indian. As the story begins, Alexie’s character is financially tied. He is a Spokane Indian man who is messed with the approaching errand of reasoning of $1,000 in twenty-four hours. He is intended to recover his grandma’s formal attire from a second hand store. It was stolen and he needs to recuperate it. Alexie’s story occurs in Seattle and the events of the work happen just on one day. Jackson is the storyteller and central character of the work. Taking everything into account, What You Pawn I Will Redeem is Alexie’s undertaking to play with and subvert the typical subjects of the “singular Indian” and the “respectable savage” that plague a great deal of American composition. Alexie goes past the stock pictures of Native Americans in his portrayal of Jackson and empowers the character to develop a voice past his social animation into that of an individual. Notwithstanding the way that Jackson’s associations with white men over the range of the story are dire, they resound with unfulfilled deals, broken assurances, and the resultant loss of place where there is the Native American. What You Pawn I Will Redeem centers around different points which consolidate references to social vagrancy, ethnic inheritance, and stereotyping and ethnic identity.

What You Redeem, I Will Write (About). (2020, Nov 03). Retrieved from https://papersowl.com/examples/what-you-redeem-i-will-write-about/

The Inspiration to Write

Superman and me Theme