Plastic Pollution in the Philippines 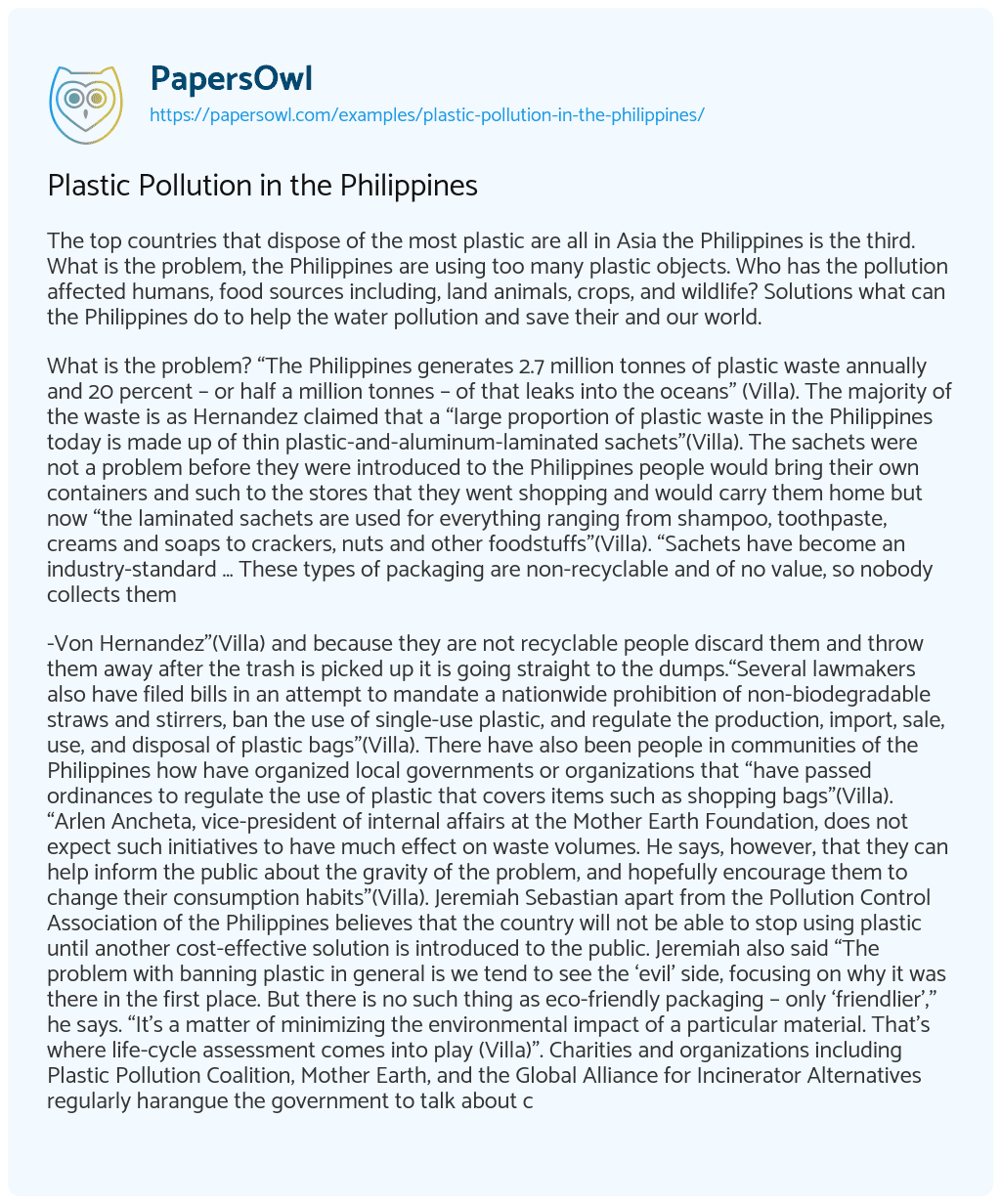 The top countries that dispose of the most plastic are all in Asia the Philippines is the third. What is the problem, the Philippines are using too many plastic objects. Who has the pollution affected humans, food sources including, land animals, crops, and wildlife? Solutions what can the Philippines do to help the water pollution and save their and our world.

What is the problem? “The Philippines generates 2.7 million tonnes of plastic waste annually and 20 percent – or half a million tonnes – of that leaks into the oceans” (Villa). The majority of the waste is as Hernandez claimed that a “large proportion of plastic waste in the Philippines today is made up of thin plastic-and-aluminum-laminated sachets”(Villa). The sachets were not a problem before they were introduced to the Philippines people would bring their own containers and such to the stores that they went shopping and would carry them home but now “the laminated sachets are used for everything ranging from shampoo, toothpaste, creams and soaps to crackers, nuts and other foodstuffs”(Villa). “Sachets have become an industry-standard … These types of packaging are non-recyclable and of no value, so nobody collects them

-Von Hernandez”(Villa) and because they are not recyclable people discard them and throw them away after the trash is picked up it is going straight to the dumps.“Several lawmakers also have filed bills in an attempt to mandate a nationwide prohibition of non-biodegradable straws and stirrers, ban the use of single-use plastic, and regulate the production, import, sale, use, and disposal of plastic bags”(Villa). There have also been people in communities of the Philippines how have organized local governments or organizations that “have passed ordinances to regulate the use of plastic that covers items such as shopping bags”(Villa). “Arlen Ancheta, vice-president of internal affairs at the Mother Earth Foundation, does not expect such initiatives to have much effect on waste volumes. He says, however, that they can help inform the public about the gravity of the problem, and hopefully encourage them to change their consumption habits”(Villa). Jeremiah Sebastian apart from the Pollution Control Association of the Philippines believes that the country will not be able to stop using plastic until another cost-effective solution is introduced to the public. Jeremiah also said “The problem with banning plastic in general is we tend to see the ‘evil’ side, focusing on why it was there in the first place. But there is no such thing as eco-friendly packaging – only ‘friendlier’,” he says. “It’s a matter of minimizing the environmental impact of a particular material. That’s where life-cycle assessment comes into play (Villa)”. Charities and organizations including Plastic Pollution Coalition, Mother Earth, and the Global Alliance for Incinerator Alternatives regularly harangue the government to talk about cities’ non-compliance about 9003. “In 2000 a solution was presented in the form of the Republic Act 9003, also known as the Ecological Solid Waste Management Act of 2000, but local governments in the Philippines have struggled to implement its directives, Grate says(Villa).” “Only around ten percent of waste is treated correctly in the Philippines(Greentumble).” Most of the sewage is put directly into the 421 rivers out of those rivers 50 of them are considered dead and have no oxygen levels in them and incapable to support most aspects of life(Borgen magazine). Fifty-eight percent of all groundwater in the Philippines that were tested are contaminated with the Coliform bacteria. Not only are people affected but also the wildlife animals and plants. The Philippines produce around four point five million tonnes of seafood and aquatic plants a year making it the 9th in the world, but the amount of fish being fished has been declining since 2010(Alli).

Cadmium, Chromium, Cyanide, Lead, and Mercury are all being dumped directly into waterways, rivers, lakes, ponds, and the ocean on a daily basis(Greentumble). Pollutants from agriculture runoff that is running into ponds, rivers, lakes, oceans can include fertilizers, herbicides, dead plants, soil erosion runoff, pesticides, dead animals, manure, and dead plants(Greentumble). “An abundance of waterborne viruses and bacteria in drinking water leads to the contraction of afflictions such as diarrhea, cholera, and various skin diseases. People, as well as other animals, also experience the buildup of toxins over time within the fatty tissue of their bodies, known as bioaccumulation. In urban areas with inadequate sewage systems, cancer mortality rates are high(Andrews).” The Philippines are in the top 3 of most plastic discarding countries Chinas #1, Indonesia is #2. Unilever, Colgate-Palmolive, Nestle, Procter, and gamble were among the biggest producers of plastic in, on, and around the Philippines. One reason that the sachets are such a hit in the Philippines is that they are cheap and in a country where twenty-five percent of people or one in five are under the poverty line(villa). No places in the Philippines are capable of recycling them or processing them and no one wants to collect them because they are worth nothing(villa). If the sachets keep selling at the same rate the Philippines will need roughly 200 landfills the size of Metro Manila(forty-seven-thousand eight-hundred forty square miles)(Villa). The pollution that the Philippines are producing is affecting the water around them the Babuyan Channel, South China Sea, Celebes Sea, and the pacific ocean a the trash can get a one-way ticket to the trash island or can come back and wash up on shore. One-third of the illnesses in the past five-year period were waterborne illnesses(Marrone). Out of one hundred million nine million of them rely on unsafe water supplies(Khalid). Thirty million Filipinos suffer from and or don’t have proper sewage and sanitation facilities. Those thirty million people have to spend lots of time just for access to clean water. For those people who do not have proper toilets go outside to relieve themselves some ask neighbors to use their toilets(Khalid). According to the World Health Organization “showed nitrates levels above the WHO safety limit of 50 mg l-1 of nitrate (Khalid).”

How can we all fix this? If people went back to the way before the sachets were introduced by bringing their own small reusable containers where they can go to the store and get small amounts of condiments. Another way that the Philippines can help with plastic pollution is to build a recycling place where they can recycle sachets and other materials. To make a law that “mandates producers to be responsible for the products and packaging that they are bringing to the market(Villa).” The Philippines approximately 1.3 billion dollars every year on water pollution(Marrone). “The government continues to try to clean up the problem, implementing fines to polluters as well as environmental taxes, but many problems have not been addressed(Marrone).” “The Green Peace has been working to develop a solution to water pollution in the Philippines the organization supports the clean production context where it tells the citizens what toxins they are exposed to in their daily lives(Marrone).” Putting proper sewage in all the houses so that all people have access to sanitation and toilets. Trying to lower nitrate levels in the water wells. Coca-Cola has pledged around 1.4 million dollars to the world wildlife fund that is for five years(Khalid).

Andrews, Gabriella. “Resolving the Water Pollution Crisis in the Philippines: the Implications of Water Pollution on Public Health and the Economy.”Pepperdine Policy Review, Vol. 10 , Article 2, 2018, digitalcommons.pepperdine.edu/ppr/vol10/iss1/2(copy and paste to search bar)

Plastic Pollution in the Philippines. (2021, Jun 03). Retrieved from https://papersowl.com/examples/plastic-pollution-in-the-philippines/

Save the Earth from the Plastic Pollution

Plastic Pollution in Tho Ocean: Facts and Information

An Aquatic Mess: Plastic Pollution and its Consequences in Humanity’s Future