Save the Earth from the Plastic Pollution 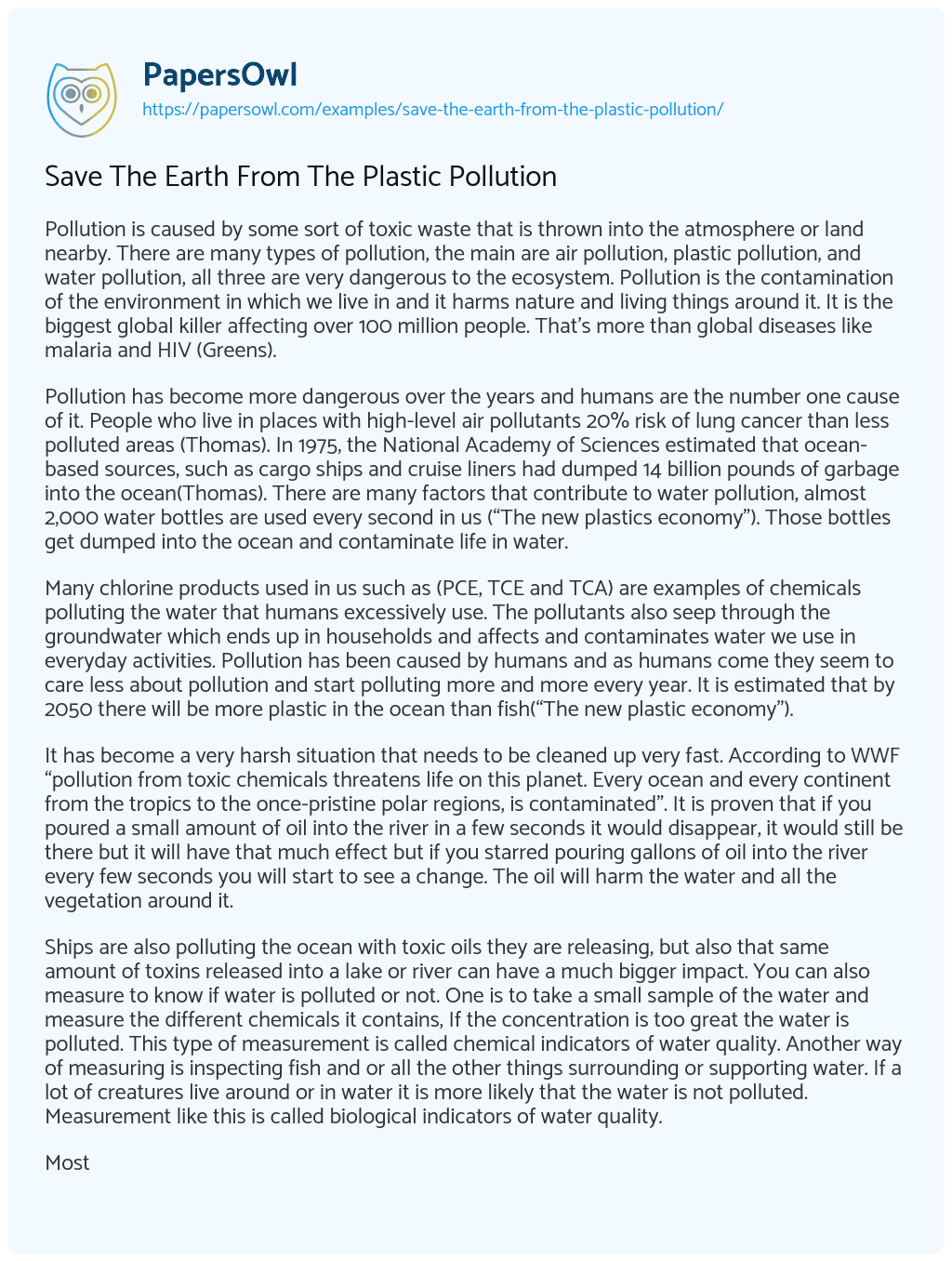 Pollution is caused by some sort of toxic waste that is thrown into the atmosphere or land nearby. There are many types of pollution, the main are air pollution, plastic pollution, and water pollution, all three are very dangerous to the ecosystem. Pollution is the contamination of the environment in which we live in and it harms nature and living things around it. It is the biggest global killer affecting over 100 million people. That’s more than global diseases like malaria and HIV (Greens).

Pollution has become more dangerous over the years and humans are the number one cause of it. People who live in places with high-level air pollutants 20% risk of lung cancer than less polluted areas (Thomas). In 1975, the National Academy of Sciences estimated that ocean-based sources, such as cargo ships and cruise liners had dumped 14 billion pounds of garbage into the ocean(Thomas). There are many factors that contribute to water pollution, almost 2,000 water bottles are used every second in us (“The new plastics economy”). Those bottles get dumped into the ocean and contaminate life in water.

Many chlorine products used in us such as (PCE, TCE and TCA) are examples of chemicals polluting the water that humans excessively use. The pollutants also seep through the groundwater which ends up in households and affects and contaminates water we use in everyday activities. Pollution has been caused by humans and as humans come they seem to care less about pollution and start polluting more and more every year. It is estimated that by 2050 there will be more plastic in the ocean than fish(“The new plastic economy”).

It has become a very harsh situation that needs to be cleaned up very fast. According to WWF “pollution from toxic chemicals threatens life on this planet. Every ocean and every continent from the tropics to the once-pristine polar regions, is contaminated”. It is proven that if you poured a small amount of oil into the river in a few seconds it would disappear, it would still be there but it will have that much effect but if you starred pouring gallons of oil into the river every few seconds you will start to see a change. The oil will harm the water and all the vegetation around it.

Ships are also polluting the ocean with toxic oils they are releasing, but also that same amount of toxins released into a lake or river can have a much bigger impact. You can also measure to know if water is polluted or not. One is to take a small sample of the water and measure the different chemicals it contains, If the concentration is too great the water is polluted. This type of measurement is called chemical indicators of water quality. Another way of measuring is inspecting fish and or all the other things surrounding or supporting water. If a lot of creatures live around or in water it is more likely that the water is not polluted. Measurement like this is called biological indicators of water quality.

Most water pollution does not come from water. Over 80% of water pollution enters through the land(Paroma). When farmers use the chemical to fertilize it could be washed up and go into groundwater or surface water nearby. Also, the pollution can be caused by chimneys in houses, it can go up in the atmosphere and the rain will bring it down entering lakes and rivers. This is called atmospheric deposition. Water has many different reasons why it’s contaminated and is polluted and it’s very difficult to solve the problem.

According to the world health Organization, 663 million people don’t have safe access to drinking water including America. Another toxic pollution comes from metals like lead cadmium and mercury. Cadmium and mercury is used in batteries. Now there is a new lead used on boat paint to make it not fall in the ocean but that is the opposite of what it was, TBT or tribytolin is recognized as a pollutant. As industrialization has spread and more technology is getting advanced there has been more pollution than ever and it’s been on increasing in size and will keep going up.

There are around 7 billion people living on planet earth, it has become clear that there are limits. And humans have exceeded that limit when it comes to pollution. Instead of inventing new stuff and making pollution worse every year, we as humans should invent new inventions to help save the Earth because it the only home we have might not be here for long if we keep up with pollution.

Save The Earth From The Plastic Pollution. (2021, Jun 03). Retrieved from https://papersowl.com/examples/save-the-earth-from-the-plastic-pollution/

Plastic Pollution in Tho Ocean: Facts and Information

An Aquatic Mess: Plastic Pollution and its Consequences in Humanity’s Future