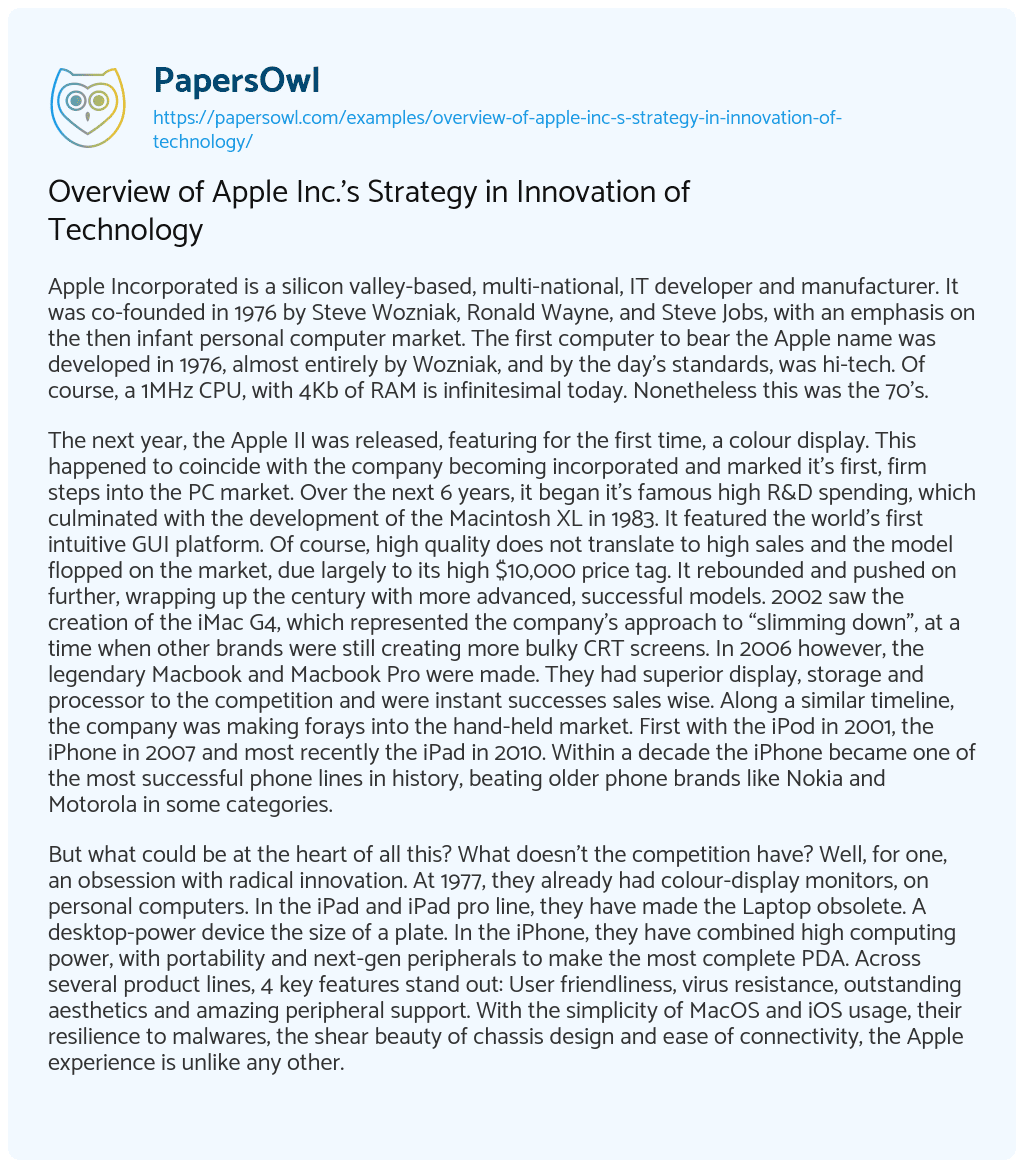 Apple Incorporated is a silicon valley-based, multi-national, IT developer and manufacturer. It was co-founded in 1976 by Steve Wozniak, Ronald Wayne, and Steve Jobs, with an emphasis on the then infant personal computer market. The first computer to bear the Apple name was developed in 1976, almost entirely by Wozniak, and by the day’s standards, was hi-tech. Of course, a 1MHz CPU, with 4Kb of RAM is infinitesimal today. Nonetheless this was the 70’s.

The next year, the Apple II was released, featuring for the first time, a colour display. This happened to coincide with the company becoming incorporated and marked it’s first, firm steps into the PC market. Over the next 6 years, it began it’s famous high R&D spending, which culminated with the development of the Macintosh XL in 1983. It featured the world’s first intuitive GUI platform. Of course, high quality does not translate to high sales and the model flopped on the market, due largely to its high $10,000 price tag. It rebounded and pushed on further, wrapping up the century with more advanced, successful models. 2002 saw the creation of the iMac G4, which represented the company’s approach to “slimming down”, at a time when other brands were still creating more bulky CRT screens. In 2006 however, the legendary Macbook and Macbook Pro were made. They had superior display, storage and processor to the competition and were instant successes sales wise. Along a similar timeline, the company was making forays into the hand-held market. First with the iPod in 2001, the iPhone in 2007 and most recently the iPad in 2010. Within a decade the iPhone became one of the most successful phone lines in history, beating older phone brands like Nokia and Motorola in some categories.

But what could be at the heart of all this? What doesn’t the competition have? Well, for one, an obsession with radical innovation. At 1977, they already had colour-display monitors, on personal computers. In the iPad and iPad pro line, they have made the Laptop obsolete. A desktop-power device the size of a plate. In the iPhone, they have combined high computing power, with portability and next-gen peripherals to make the most complete PDA. Across several product lines, 4 key features stand out: User friendliness, virus resistance, outstanding aesthetics and amazing peripheral support. With the simplicity of MacOS and iOS usage, their resilience to malwares, the shear beauty of chassis design and ease of connectivity, the Apple experience is unlike any other.

Overview of Apple Inc.’s Strategy in Innovation of Technology. (2021, May 20). Retrieved from https://papersowl.com/examples/overview-of-apple-inc-s-strategy-in-innovation-of-technology/

Diagram of Apple Inc’s. Technique in Advancement of Innovation