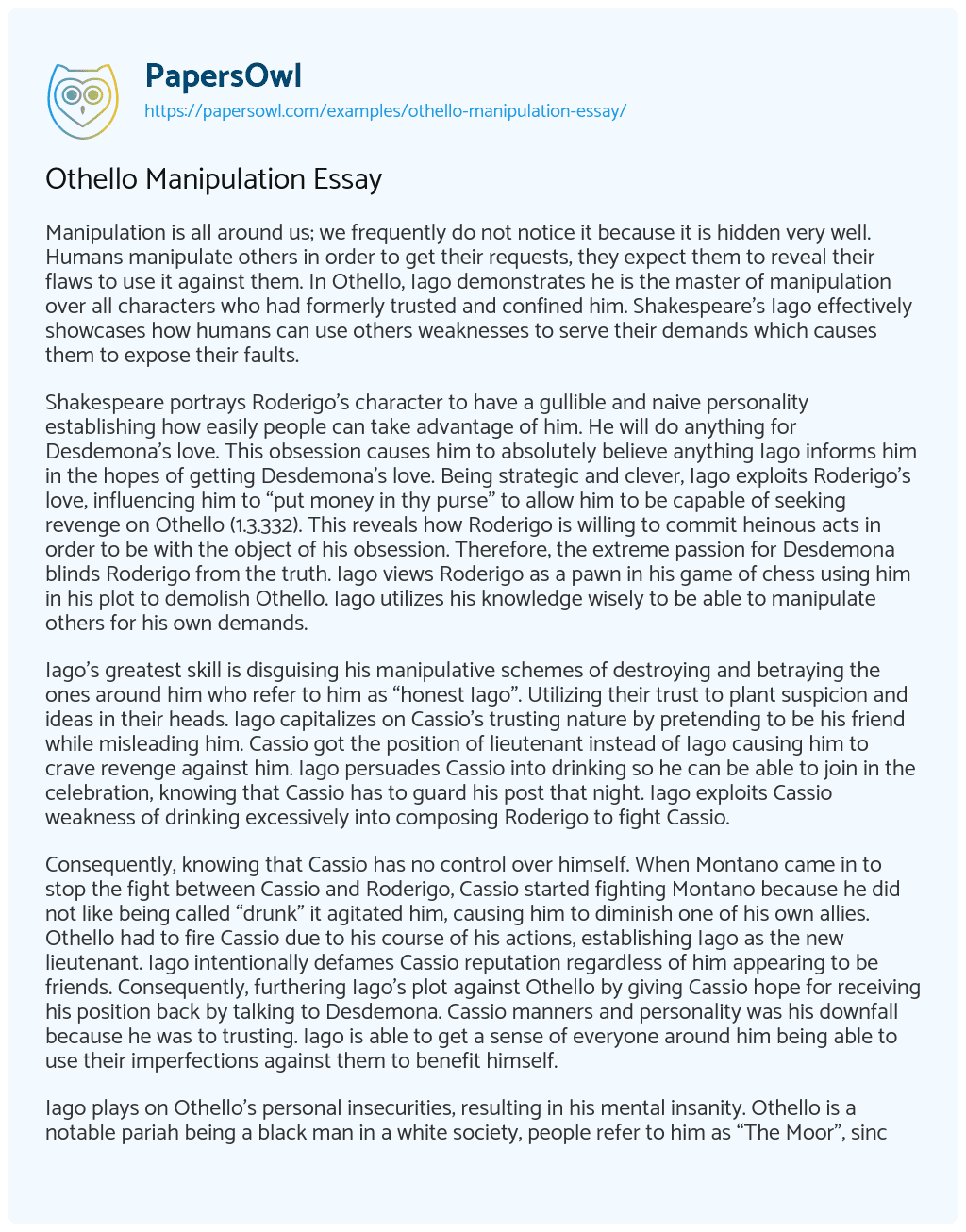 Manipulation is all around us; we frequently do not notice it because it is hidden very well. Humans manipulate others in order to get their requests, they expect them to reveal their flaws to use it against them. In Othello, Iago demonstrates he is the master of manipulation over all characters who had formerly trusted and confined him. Shakespeare’s Iago effectively showcases how humans can use others weaknesses to serve their demands which causes them to expose their faults.

Shakespeare portrays Roderigo’s character to have a gullible and naive personality establishing how easily people can take advantage of him. He will do anything for Desdemona’s love. This obsession causes him to absolutely believe anything Iago informs him in the hopes of getting Desdemona’s love. Being strategic and clever, Iago exploits Roderigo’s love, influencing him to “put money in thy purse” to allow him to be capable of seeking revenge on Othello (1.3.332). This reveals how Roderigo is willing to commit heinous acts in order to be with the object of his obsession. Therefore, the extreme passion for Desdemona blinds Roderigo from the truth. Iago views Roderigo as a pawn in his game of chess using him in his plot to demolish Othello. Iago utilizes his knowledge wisely to be able to manipulate others for his own demands.

Iago’s greatest skill is disguising his manipulative schemes of destroying and betraying the ones around him who refer to him as “honest Iago”. Utilizing their trust to plant suspicion and ideas in their heads. Iago capitalizes on Cassio’s trusting nature by pretending to be his friend while misleading him. Cassio got the position of lieutenant instead of Iago causing him to crave revenge against him. Iago persuades Cassio into drinking so he can be able to join in the celebration, knowing that Cassio has to guard his post that night. Iago exploits Cassio weakness of drinking excessively into composing Roderigo to fight Cassio.

Consequently, knowing that Cassio has no control over himself. When Montano came in to stop the fight between Cassio and Roderigo, Cassio started fighting Montano because he did not like being called “drunk” it agitated him, causing him to diminish one of his own allies. Othello had to fire Cassio due to his course of his actions, establishing Iago as the new lieutenant. Iago intentionally defames Cassio reputation regardless of him appearing to be friends. Consequently, furthering Iago’s plot against Othello by giving Cassio hope for receiving his position back by talking to Desdemona. Cassio manners and personality was his downfall because he was to trusting. Iago is able to get a sense of everyone around him being able to use their imperfections against them to benefit himself.

Iago plays on Othello’s personal insecurities, resulting in his mental insanity. Othello is a notable pariah being a black man in a white society, people refer to him as “The Moor”, since his skin color results in unfair assumptions and being referred to many different types of animalistic characteristics. Therefore, the only person that truly loves him is Desdemona. During the time period of this play, it was rare and controversial to examine people getting married. Resulting in societies prejudice, damaging Othello’s self-esteem, allowing Iago to take advantage of his insecurities in order to evoke the feeling of jealousy. Being logical, Iago claims that Desdemona would prefer Cassio because she is like him in color, speech and age, convincing Othello that he has lost her. Iago demonstrates to Othello how Desdemona is unfaithful by utilizing her past and gender.

Furthermore, Iago reminds Othello of how Desdemona betrayed her father by running away portraying that she is untrustworthy. This concludes that Desdemona betrayed her father and will most likely betray Othello too. With the knowledge of women in the time period, “Iago, poisons the mind of the outsider [Othello] against his wife, suggesting that all Venetian women are promiscuous and unfaithful” leading to signify her betrayal (Jones). Iago toys with Othello’s mind utilizing his insecurities to generate suspicion about his wife. In addition, each discussion Iago has held with Othello has placed doubt in his mind, which causes Othello to believe nobody else but him. Iago swaddles Othello in a coat of lies, utilizing jealousy and uncertainty to compel him against his wife. Othello agrees with all Iago’s lies believing them to be true, but believes Desdemona pleas to be lies. Accordingly, Othello enables his emotions to run untamed, thinking that death is the only option for Desdemona’s disloyalty. In essence, Iago exploits Othello’s insecurities bring about self-doubt in his mind, provoking the feeling of betrayal upon his wife.

Shakespeare’s Desdemona is well known for her innocence and loyalty, beyond all, her love for Othello is pure. She is kind-hearted and is willing to help others in need. Desdemona will do anything for Othello’s love. However, Iago has planted suspicion in Othello’s mind about Desdemona accusations of adultery. Iago sees an opportunity to gain Othello’s prize possession his handkerchief. The handkerchief symbolizes Desdemona’s faith to Othello. Also, it carries a significant amount of meaning behind it by it came from his parents representing marital fidelity. When Othello confronted her about location of the handkerchief, she was dodging the question provoking him to feel suspicious.

Once, Othello witnesses Cassio with the handkerchief, he accepts it as confirmation of her infidelity. Othello becomes enraged deciding to hit his wife and accuse her of adultery, while she is wondering what she did to deserve this. Desdemona goes to Iago for help to learn why is Othello making those accusations about her, Iago lies to her by questioning how could Othello get such a idea. Desdemona never stood up for herself disputing with Othello demonstrating her love and faithfulness to Othello. In addition, every Venetian wife must obey their husbands, if not their love life would be ruin. Desdemona unconditional love for Othello showcases that she would never cheat on Othello because she loves him to much. However, Iago capitalizes upon her virtues and deceptive actions to achieve Othello feeling enrage, allowing Iago to destroy Desdemona in order to damage Othello.

Shakespeare’s Emilia is a minor character in the play, but make crucial contributions by her loyalty and honesty. Throughout the play, Iago been deceiving his wife for his grand revenge scheme against Othello. Iago utilizes Emilia close relationship to Desdemona allowing Emilia to steal the handkerchief, which seals Desdemona’s fate. Emilia thought by stealing the handkerchief for him something romantic or astonishing would come out of it. Nevertheless, Iago bestows the handkerchief to Cassio for evidence of Desdemona accusations of adultery. Emilia defeat was that her needs were never satisfied by Iago. Eventually, Emilia discovers that her husband has been giving Othello false information resulting in killing a innocent women. Emilia is flabbergasted that her husband would do something so terribly horrid, triggering her to break her silence and obedience. Therefore, Emilia argues with Iago speaking the truth about all his manipulation acts in order for him to get the karma he deserves. Although, Emilia has spoken the truth, Iago disapproves of it deciding to kill her while being aware that this will probably be the end of the line for him.

Iago undermines each character’s weakness in order to succeed in his grand scheme. Through manipulation Iago has been “goading them [each character] to murder each other for his own personal gain”, illustrating his convincing nature and and ability to manipulate character’s to do his bidding (McCreary). The gullible fool Roderigo, trusting Cassio, insecure Othello, virtuous Desdemona, honest Emilia all fall for Iago’s trick. Iago plays a strategic game of chess, with the lives of the people around him being the pawns, his goal being to take out the king. Unfortunately, Iago masterminds the downfalls and deaths of many, left with the consequence of his actions and the weight of all deaths he has caused on his shoulders.