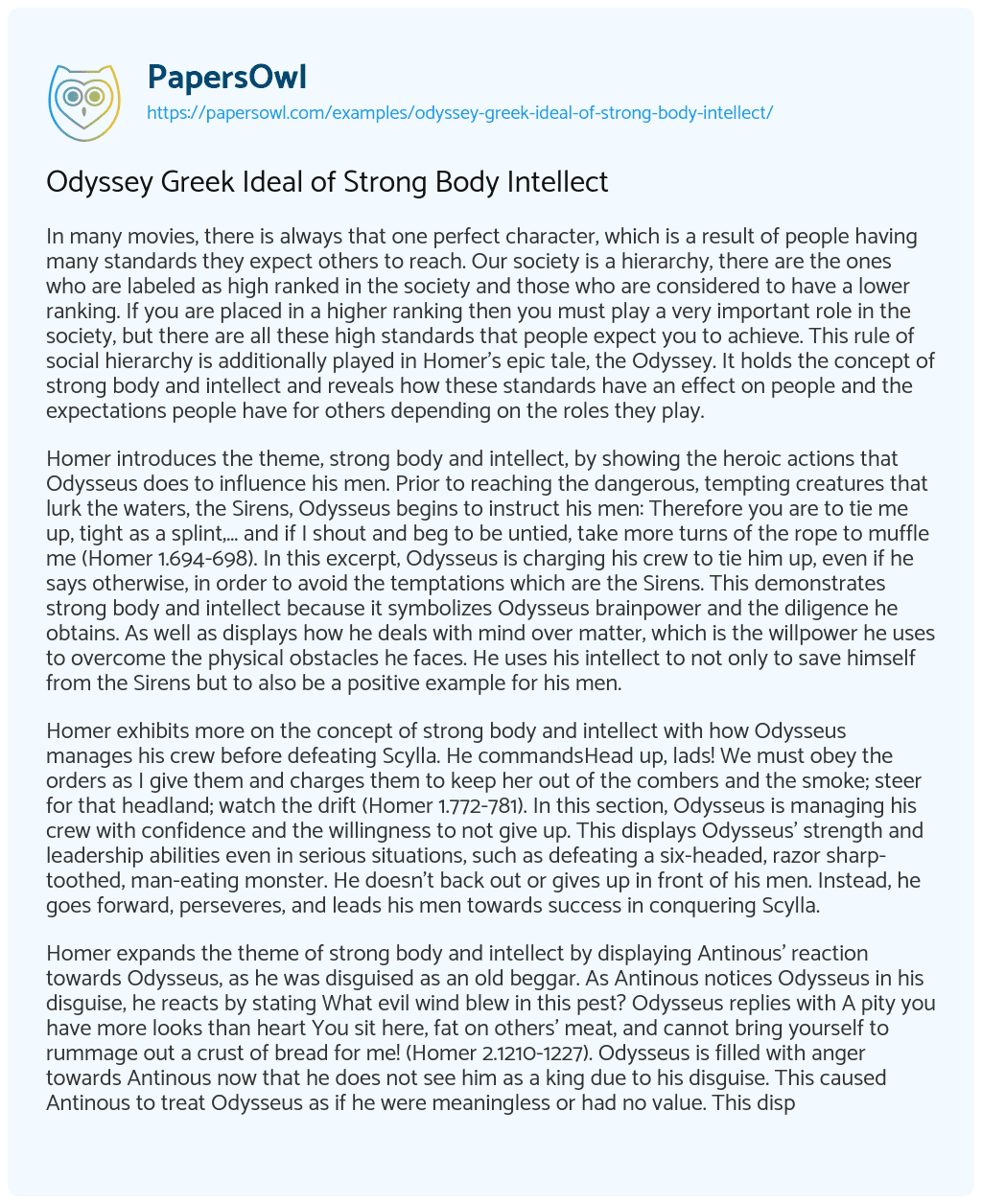 In many movies, there is always that one perfect character, which is a result of people having many standards they expect others to reach. Our society is a hierarchy, there are the ones who are labeled as high ranked in the society and those who are considered to have a lower ranking. If you are placed in a higher ranking then you must play a very important role in the society, but there are all these high standards that people expect you to achieve. This rule of social hierarchy is additionally played in Homer’s epic tale, the Odyssey. It holds the concept of strong body and intellect and reveals how these standards have an effect on people and the expectations people have for others depending on the roles they play.

Homer introduces the theme, strong body and intellect, by showing the heroic actions that Odysseus does to influence his men. Prior to reaching the dangerous, tempting creatures that lurk the waters, the Sirens, Odysseus begins to instruct his men: Therefore you are to tie me up, tight as a splint,… and if I shout and beg to be untied, take more turns of the rope to muffle me (Homer 1.694-698). In this excerpt, Odysseus is charging his crew to tie him up, even if he says otherwise, in order to avoid the temptations which are the Sirens. This demonstrates strong body and intellect because it symbolizes Odysseus brainpower and the diligence he obtains. As well as displays how he deals with mind over matter, which is the willpower he uses to overcome the physical obstacles he faces. He uses his intellect to not only to save himself from the Sirens but to also be a positive example for his men.

Homer exhibits more on the concept of strong body and intellect with how Odysseus manages his crew before defeating Scylla. He commandsHead up, lads! We must obey the orders as I give them and charges them to keep her out of the combers and the smoke; steer for that headland; watch the drift (Homer 1.772-781). In this section, Odysseus is managing his crew with confidence and the willingness to not give up. This displays Odysseus’ strength and leadership abilities even in serious situations, such as defeating a six-headed, razor sharp-toothed, man-eating monster. He doesn’t back out or gives up in front of his men. Instead, he goes forward, perseveres, and leads his men towards success in conquering Scylla.

Homer expands the theme of strong body and intellect by displaying Antinous’ reaction towards Odysseus, as he was disguised as an old beggar. As Antinous notices Odysseus in his disguise, he reacts by stating What evil wind blew in this pest? Odysseus replies with A pity you have more looks than heart You sit here, fat on others’ meat, and cannot bring yourself to rummage out a crust of bread for me! (Homer 2.1210-1227). Odysseus is filled with anger towards Antinous now that he does not see him as a king due to his disguise. This caused Antinous to treat Odysseus as if he were meaningless or had no value. This displays Odysseus’ strength not physically, but mentally in addition to demonstrating the expectations and standards people have for others. Odysseus exhibits mental toughness because since he is displayed in a rather underprivileged disguise, the Suitors treat him with no value nor respect, but instead of walking away from the Suitors, Odysseus stands and confronts them.

This modern-day society we live in is filled with high standards many wish to live up to. Although there are certain expectations that are necessary to be met, it isn’t very realistic to be so strict about them. In the Odyssey, Homer develops the theme of strong body and intellect by displaying Odysseus’ heroic actions. Odysseus was able to meet many of the high expectations, mainly because he was born to be the best of best. All in all, his hero’s journey was only in the land of mythology, not reality. Having judgment towards somebody is a normal human reaction to have, but it doesn’t have to be announced. The moral of it all is it’s always important to live by your own values and not by anyone else’s.