Obesity is Fast Food the Leading Cause 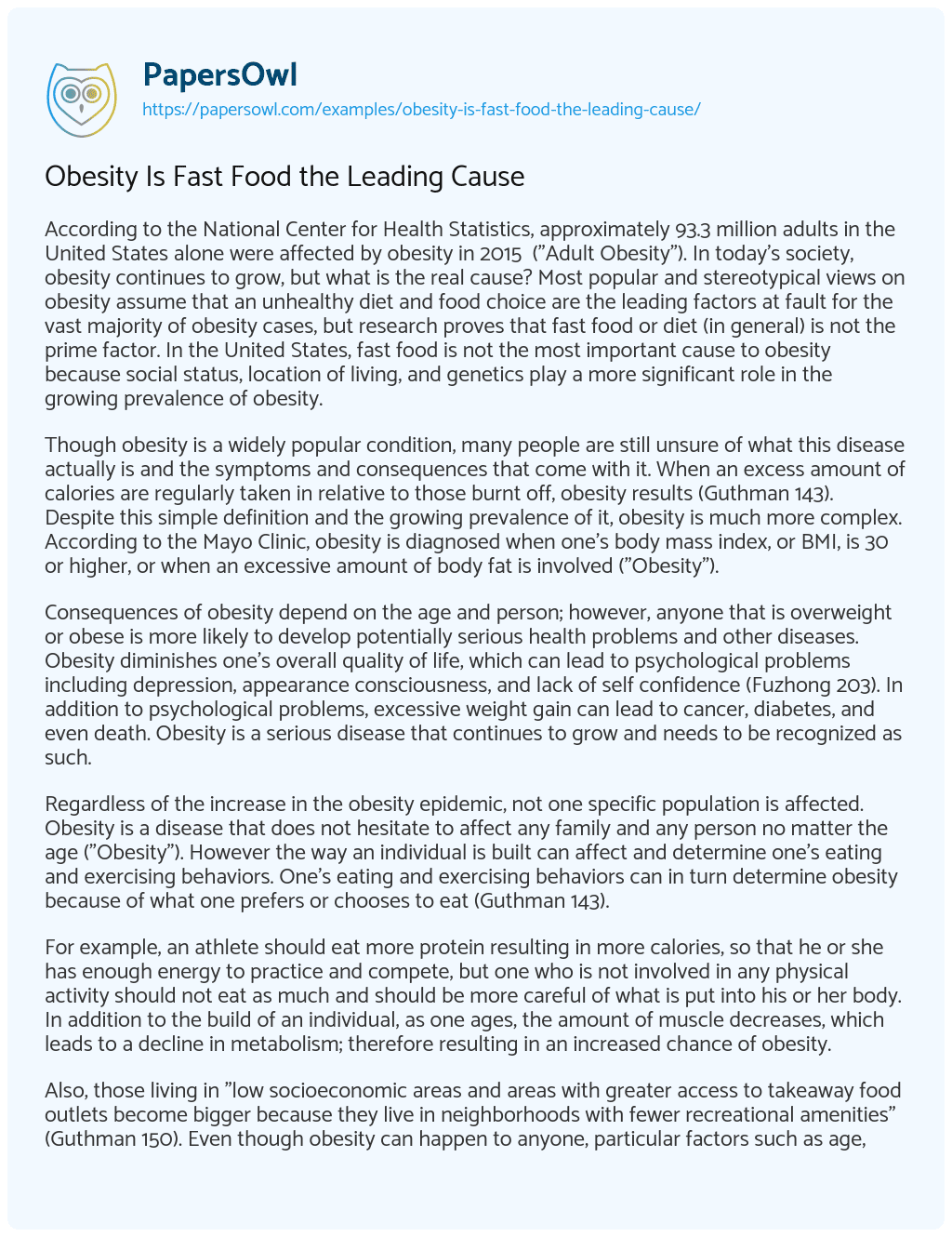 According to the National Center for Health Statistics, approximately 93.3 million adults in the United States alone were affected by obesity in 2015  (“Adult Obesity”). In today’s society, obesity continues to grow, but what is the real cause? Most popular and stereotypical views on obesity assume that an unhealthy diet and food choice are the leading factors at fault for the vast majority of obesity cases, but research proves that fast food or diet (in general) is not the prime factor. In the United States, fast food is not the most important cause to obesity because social status, location of living, and genetics play a more significant role in the growing prevalence of obesity.

Though obesity is a widely popular condition, many people are still unsure of what this disease actually is and the symptoms and consequences that come with it. When an excess amount of calories are regularly taken in relative to those burnt off, obesity results (Guthman 143). Despite this simple definition and the growing prevalence of it, obesity is much more complex. According to the Mayo Clinic, obesity is diagnosed when one’s body mass index, or BMI, is 30 or higher, or when an excessive amount of body fat is involved (“Obesity”).

Consequences of obesity depend on the age and person; however, anyone that is overweight or obese is more likely to develop potentially serious health problems and other diseases. Obesity diminishes one’s overall quality of life, which can lead to psychological problems including depression, appearance consciousness, and lack of self confidence (Fuzhong 203). In addition to psychological problems, excessive weight gain can lead to cancer, diabetes, and even death. Obesity is a serious disease that continues to grow and needs to be recognized as such.

Regardless of the increase in the obesity epidemic, not one specific population is affected. Obesity is a disease that does not hesitate to affect any family and any person no matter the age (“Obesity”). However the way an individual is built can affect and determine one’s eating and exercising behaviors. One’s eating and exercising behaviors can in turn determine obesity because of what one prefers or chooses to eat (Guthman 143).

For example, an athlete should eat more protein resulting in more calories, so that he or she has enough energy to practice and compete, but one who is not involved in any physical activity should not eat as much and should be more careful of what is put into his or her body. In addition to the build of an individual, as one ages, the amount of muscle decreases, which leads to a decline in metabolism; therefore resulting in an increased chance of obesity.

Also, those living in “low socioeconomic areas and areas with greater access to takeaway food outlets become bigger because they live in neighborhoods with fewer recreational amenities” (Guthman 150). Even though obesity can happen to anyone, particular factors such as age, build, and location of living affect who is more likely to be obese or overweight.

Throughout our country’s history, obesity has been associated with the fast food industry and has been thought to be caused specifically by fast food; however, there is more to the story. Previous research studies have shown that the growth in obesity cases is triggered by an environment surrounded by cheap, and fast food; however, these studies “neglect the possibility that features of the environment may be as much as a cause as an effect” (Guthman 142).

Obesity is assumed to be caused by what people eat, yet other factors are most often not accounted for when research is conducted.To illustrate, most assume that the proximity or density of fast-food restaurants is decisive in people’s eating habits and that “living in certain neighborhoods made people bigger than they otherwise might have been, though studies again did not account for the location of the fast food outlets and the social status of the people living in that particular region” (Guthman 148).

Also, in an interview with several mothers who were asked what they believed caused obesity, their thoughts all pointed back to the inability to buy healthy foods because of low income and low social status (Danford 870). These mothers also believe that parenting behaviors affect the likelihood that children will become obese. Overall, the assumption that fast food initially causes obesity is not only wrong, but it is proven otherwise. Obesity has many other factors that contribute to this epidemic that need to be accounted for.

Even though obesity is thought to be caused primarily by one’s diet and amount  of physical activity, other major factors can affect one’s probability of becoming obese. In the United States, social status, location of living, stress, and genetics play an important role in determining why and what causes people to become obese. According to Julie Guthman, increased rates of excessive weight gain take place among populations of low social and economic status (143).

Both demographic and socioeconomic elements are strong predictors in how prevalent obesity is in a neighborhood, family, or individual. To further strengthen this claim, Julie Guthmen states that “weight status is a cause of class status rather than a consequence;” therefore, “thinness guarantees high status, and fatness guarantees low status” (150). Obesity is more common in areas of lower social status leading to the conclusion that weight gain does not rely fully on the choice to eat at fast food restaurants. Instead it focuses on the family status in a particular neighborhood.

If a family lives in a low social status neighborhood, the likelihood of obesity is more likely due to the limitations of sources of food, the prices of food, and the amount of opportunity for physical activity. Furthermore, where one lives also affects how likely it is for an individual to gain excessive weight. According to the Mayo Clinic, the decline of unsafe places to exercise and the unavailability to nutritious foods and supermarkets, ultimately increase the frequency of obesity cases (“Obesity”).

Factors such as these account for more of why obesity occurs other than an individual’s diet. Psychological and genetic factors also contribute to the obesity epidemic. For example, disruptions in sleep patterns are associated with an “increased body fat and altered metabolism” (Guthman 152). In addition, chronic stress plays a role in obesity with the “constant release of the hormone cortisol” (Guthman 158). Stress causes people to want to eat, which in turn can lead to obesity; however, this does not mean that eating primarily causes obesity.

To illustrate, if one is stressed for a long period of time, the immediate response for some people is too stress-eat. Because one is stressed the overall result can be obesity, but the diet itself is not the cause. Furthermore, excessive weight gain can also be hereditary or genetic. The Mayo Clinic states that “genes affect the amount of body fat you store, how efficiently your body converts food into energy, how your body burns calories during exercise, and where stored fat is distributed” (“Obesity”).

Despite being an active and healthy person, one may not be able to eat as much as a different person due to the genetic background of an individual. According to the Center for Disease Control and Prevention, there is an obvious pattern of inherited obesity within a family (“Adult Obesity”). Genetics cause people to have an increased appetite and a larger food intake, which affects one’s overall weight unless other prevention factors are in progress.

Medical illness also relates to the cause of obesity. Prader-Wili Syndrome, Cushing’s Syndrome, and an underactive thyroid can be traced back to the source of excessive weight gain (Fortura 58). Medical reasoning behind obesity states that “those who are affected by other medical conditions are more likely to be obese due to the emotional and psychological effects that medical illnesses have on individuals” (Sharma 290). Hence weight gain and obesity are caused by various factors including social status, location of living, and genetics.

Due to the seriousness of obesity and the consequences that occur because of it, excessive weight gain should be taken seriously. For those that are affected by obesity or knows someone that is, various prevention opportunities are available to help. According to the Mayo Clinic, changing one’s diet, amount of physical activity, behavior, and medications can help an individual lose weight or prevent obesity from occuring (“Obesity”).

By exercising daily, eating healthy, and watching what you eat, obesity can be stopped. Informing and motivating individuals to live a more healthy lifestyle and to eat at healthier times and environments can prevent someone from gaining unnecessary weight and overall decrease the amount of obesity cases in the United States (Fuzhong 208). Because obesity rates continue to grow, preventing it and seeking help to avoid becoming obese is important now more than ever.

Overall, obesity is a chronic disease that affects people of all ages and backgrounds. It does not primarily relate to what an individual eats, but where one lives, one’s family history, as well as, one’s social status; therefore fast food is not the only cause to obesity. Despite this, obesity still is an ongoing epidemic, and those that are affected should seek help to limit and decrease the amount of cases worldwide.

Obesity Is Fast Food the Leading Cause. (2019, Aug 19). Retrieved from https://papersowl.com/examples/obesity-is-fast-food-the-leading-cause/

The Relationship between Fast Food and Obesity

Fast Food is the Main Cause of Diabetes and Obesity

How are Fast Food Advertising and Childhood Obesity Related