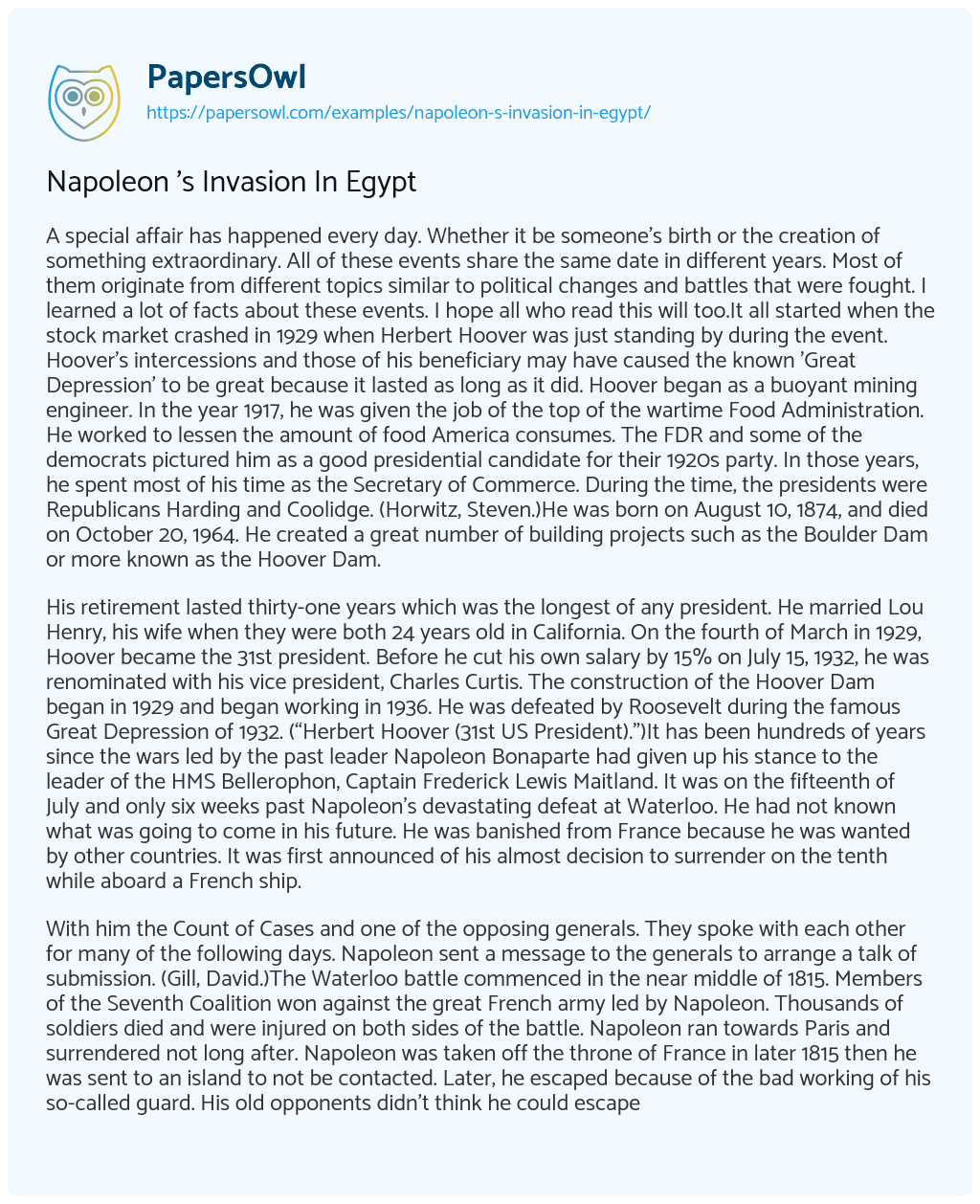 A special affair has happened every day. Whether it be someone’s birth or the creation of something extraordinary. All of these events share the same date in different years. Most of them originate from different topics similar to political changes and battles that were fought. I learned a lot of facts about these events. I hope all who read this will too.It all started when the stock market crashed in 1929 when Herbert Hoover was just standing by during the event. Hoover’s intercessions and those of his beneficiary may have caused the known ‘Great Depression’ to be great because it lasted as long as it did. Hoover began as a buoyant mining engineer. In the year 1917, he was given the job of the top of the wartime Food Administration. He worked to lessen the amount of food America consumes. The FDR and some of the democrats pictured him as a good presidential candidate for their 1920s party. In those years, he spent most of his time as the Secretary of Commerce. During the time, the presidents were Republicans Harding and Coolidge. (Horwitz, Steven.)He was born on August 10, 1874, and died on October 20, 1964. He created a great number of building projects such as the Boulder Dam or more known as the Hoover Dam.

His retirement lasted thirty-one years which was the longest of any president. He married Lou Henry, his wife when they were both 24 years old in California. On the fourth of March in 1929, Hoover became the 31st president. Before he cut his own salary by 15% on July 15, 1932, he was renominated with his vice president, Charles Curtis. The construction of the Hoover Dam began in 1929 and began working in 1936. He was defeated by Roosevelt during the famous Great Depression of 1932. (“Herbert Hoover (31st US President).”)It has been hundreds of years since the wars led by the past leader Napoleon Bonaparte had given up his stance to the leader of the HMS Bellerophon, Captain Frederick Lewis Maitland. It was on the fifteenth of July and only six weeks past Napoleon’s devastating defeat at Waterloo. He had not known what was going to come in his future. He was banished from France because he was wanted by other countries. It was first announced of his almost decision to surrender on the tenth while aboard a French ship.

With him the Count of Cases and one of the opposing generals. They spoke with each other for many of the following days. Napoleon sent a message to the generals to arrange a talk of submission. (Gill, David.)The Waterloo battle commenced in the near middle of 1815. Members of the Seventh Coalition won against the great French army led by Napoleon. Thousands of soldiers died and were injured on both sides of the battle. Napoleon ran towards Paris and surrendered not long after. Napoleon was taken off the throne of France in later 1815 then he was sent to an island to not be contacted. Later, he escaped because of the bad working of his so-called guard. His old opponents didn’t think he could escape from his exile. Napoleon rallied together support really quickly which surprised them as well. His group defeated the Prussian army before they could discuss it with their allies. (Kilroy, Debbie.)William Clark was called the Superintendent of Indian Affairs and he was the man who made the many articles of the treaty. The articles were also made by a man named Colonel Willoughby Morgan who was a leader of the United States’ first regiment infantry. Many of the tribes were afraid of removal because of repercussions that may happen because of the disagreement. They were also afraid of not having enough supplies because of the lack of animals for example the buffalo which some tribes based their life on. The tribes agreed with the Americans solely on the articles that were presented to them all. T

here were thirteen articles told to all the affected tribes. (“Treaty of July 15, 1830.”)Many Native American tribes occupied the land we call the United States before any white man had traveled to this land. These travelers industrialized the large land and created a booming capital for many functions. The people created many treaties to acquire over 1.5 billion acres of land. This land was made into states in particular Iowa and other surrounding states. They were fresh off their fight for freedom and they didn’t have enough manpower to take down all of the tribes seeing as some were much more powerful. They made a more political approach by offering them treaties. In 1824, the first treaty was signed allowing America to obtain land that is now part of the state of Iowa. (Sherman, Bill.)A group strike began on the date July fifteenth of 1959. The strike lasted 116 days. The event consisted of many workers from the United Steelworkers of America. It was against the greatest and highest of the producers of this product. They wanted better technology and more efficient job reliability and guarantee. The strike ended long after it began on December fifth. Today the Taft-Hartley act still torments workers. This act was initiated in 1947 during the Oakland General Strike of 1946. Mostly females guided the large group of 140,000 people during the strike. The steelworker strike hit a record when running from the day July 15 to December 5. (“Today in Labor History: Start of the 1959 Steel Strike.”)An agreement to end the large strike was found in early 1960.

President McDonald was the leader of USWA. The strike is said to be the largest in US history and caused the greatest discontinuation of working in the subject. One of the causes of the strike was the fact that major owners of the companies refused to raise the wages despite the rising profits and demand for the product. It was a fight between large corporate and large groups of important steel making workers. The Union asked for higher wages than most were expecting. (Smemo, Kristoffer, et al.)Fifteen hundred Americans in 3,300 troops left Iraq which began the finish of the greatest military ease mission on July 15, 1991. Iraq was prohibited from piloting any style of planes with what is called fixed wings. The country’s leader, Baghdad, forbade the setting of certain authorities comparable to the country’s own troops and other surrounding officers. A speaker told the country named that they were ready to act in the future if needed. The military guaranteed they would put their efforts into protecting the Kurdish people that Iraq was attacking. They sent troops to the far border of Iraq to keep their stand for protection. (Schmitt, Eric.)Prior to the troops evacuating the country they were a part of the Iran-Iraq war that lasted from the year 1980 to 1988. While the country of Iraq was in celebration of their victory the leader of Saudi Arabia, Laden, was suffering from losses of money. The president of Iraq was extinguishing the Iraqi debts. The US president celebrated Thanksgiving with some of his Military personnel.

The Iraqi leader accused the small country of Kuwait and others with notices and quotes from the Organization of Petroleum Exporting Countries in the month of July. (“The Gulf War, 1991.)This battle was told to be on the sixteenth of July in the year 1779. Washington commanded the troops along with a man named Anthony Wayne. America was up 2 to 1 against the British. There were only 15 found dead on the American side while 20 were killed by America. Today, there is a historic site to remember this great battle. The battle ended with America winning over Britain. The American General, Clinton, was called to send Washington for the beginning of campaigning. (Sheehan, Michael J.F.)Stony Point, New York is far north from the popular city of New York City. America won the battle by carrying out a night attack done by professionally trained soldiers who were led by General Washington. Additional troops who were led by General Wayne defeated the opposing troops with a fast and bold charge towards the army. This success was vital to the Continental Army. The station was used for future uses such as crossing the Hudson River to lead to their win over the British army. (“Battle of Stoney Point.”)    New events happen every day of every year. Every month has its significance and certain memories whether they be global or personal. Someone is born every day, someone dies every day, and someone lives every day. People should treat every day like it matters or like it’s their last, which is similar to what many people have said in the past because anything can happen and every day is special whether people think it is or not. We all lived today.