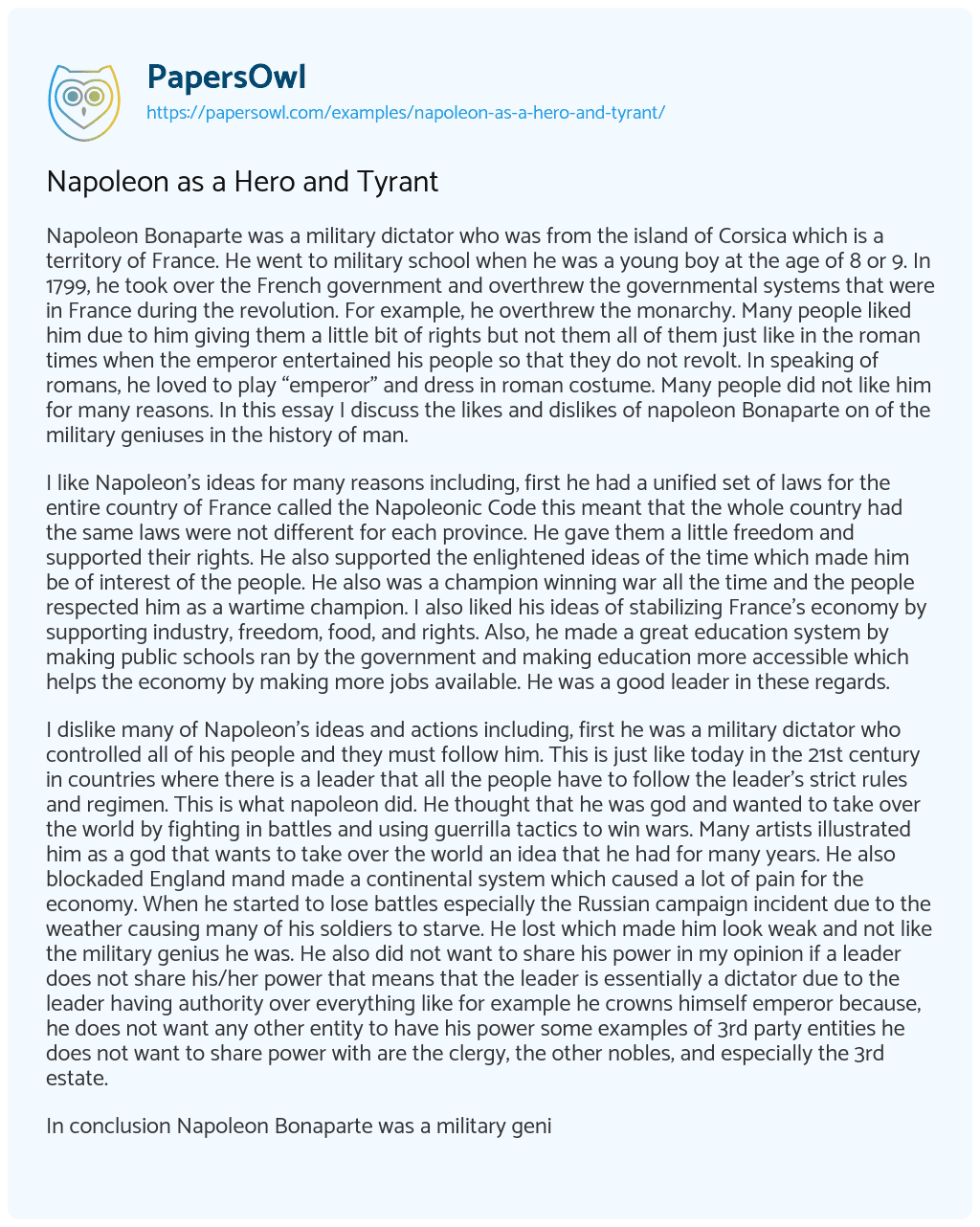 Napoleon Bonaparte was a military dictator who was from the island of Corsica which is a territory of France. He went to military school when he was a young boy at the age of 8 or 9. In 1799, he took over the French government and overthrew the governmental systems that were in France during the revolution. For example, he overthrew the monarchy. Many people liked him due to him giving them a little bit of rights but not them all of them just like in the roman times when the emperor entertained his people so that they do not revolt. In speaking of romans, he loved to play “emperor” and dress in roman costume. Many people did not like him for many reasons. In this essay I discuss the likes and dislikes of napoleon Bonaparte on of the military geniuses in the history of man.

I like Napoleon’s ideas for many reasons including, first he had a unified set of laws for the entire country of France called the Napoleonic Code this meant that the whole country had the same laws were not different for each province. He gave them a little freedom and supported their rights. He also supported the enlightened ideas of the time which made him be of interest of the people. He also was a champion winning war all the time and the people respected him as a wartime champion. I also liked his ideas of stabilizing France’s economy by supporting industry, freedom, food, and rights. Also, he made a great education system by making public schools ran by the government and making education more accessible which helps the economy by making more jobs available. He was a good leader in these regards.

I dislike many of Napoleon’s ideas and actions including, first he was a military dictator who controlled all of his people and they must follow him. This is just like today in the 21st century in countries where there is a leader that all the people have to follow the leader’s strict rules and regimen. This is what napoleon did. He thought that he was god and wanted to take over the world by fighting in battles and using guerrilla tactics to win wars. Many artists illustrated him as a god that wants to take over the world an idea that he had for many years. He also blockaded England mand made a continental system which caused a lot of pain for the economy. When he started to lose battles especially the Russian campaign incident due to the weather causing many of his soldiers to starve. He lost which made him look weak and not like the military genius he was. He also did not want to share his power in my opinion if a leader does not share his/her power that means that the leader is essentially a dictator due to the leader having authority over everything like for example he crowns himself emperor because, he does not want any other entity to have his power some examples of 3rd party entities he does not want to share power with are the clergy, the other nobles, and especially the 3rd estate.

In conclusion Napoleon Bonaparte was a military genius who had lots of ideas to become the ultimate leader of the world. This included his ability to win wars for such a long time and him calling himself emperor. He illustrates that point because, he dresses up in roman costume a lot and illustrates himself as a roman emperor. This tells me that he might have been inspired by the romans to do what he did. In conclusion they are many likes and dislikes about napoleon but in the end of his reign the old m monarchy of France was restored and the old normal came back.

Napoleon as a Hero and Tyrant. (2021, Apr 24). Retrieved from https://papersowl.com/examples/napoleon-as-a-hero-and-tyrant/