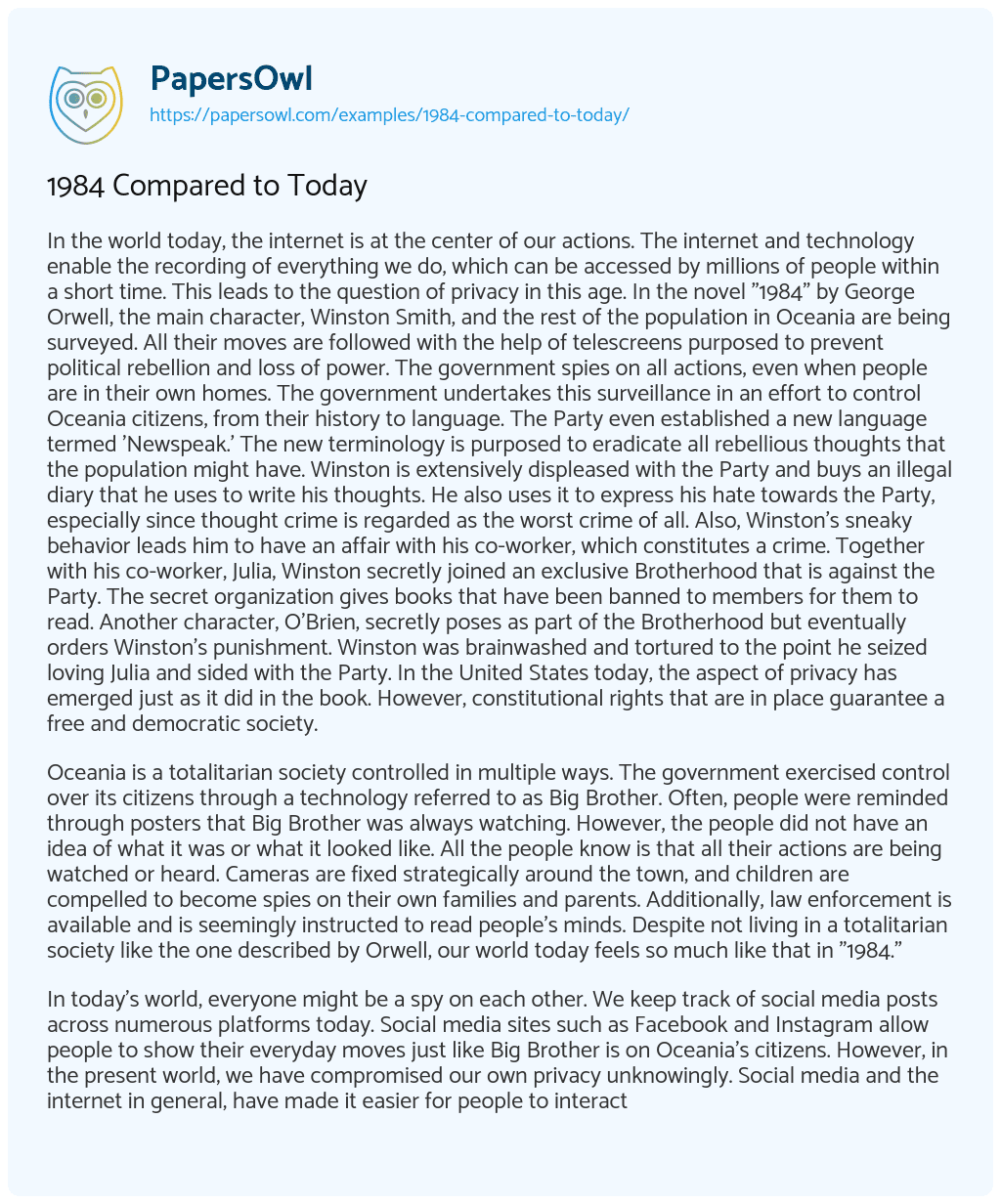 In the world today, the internet is at the center of our actions. The internet and technology enable the recording of everything we do, which can be accessed by millions of people within a short time. This leads to the question of privacy in this age. In the novel “1984” by George Orwell, the main character, Winston Smith, and the rest of the population in Oceania are being surveyed. All their moves are followed with the help of telescreens purposed to prevent political rebellion and loss of power. The government spies on all actions, even when people are in their own homes. The government undertakes this surveillance in an effort to control Oceania citizens, from their history to language. The Party even established a new language termed ‘Newspeak.’ The new terminology is purposed to eradicate all rebellious thoughts that the population might have. Winston is extensively displeased with the Party and buys an illegal diary that he uses to write his thoughts. He also uses it to express his hate towards the Party, especially since thought crime is regarded as the worst crime of all. Also, Winston’s sneaky behavior leads him to have an affair with his co-worker, which constitutes a crime. Together with his co-worker, Julia, Winston secretly joined an exclusive Brotherhood that is against the Party. The secret organization gives books that have been banned to members for them to read. Another character, O’Brien, secretly poses as part of the Brotherhood but eventually orders Winston’s punishment. Winston was brainwashed and tortured to the point he seized loving Julia and sided with the Party. In the United States today, the aspect of privacy has emerged just as it did in the book. However, constitutional rights that are in place guarantee a free and democratic society.

Oceania is a totalitarian society controlled in multiple ways. The government exercised control over its citizens through a technology referred to as Big Brother. Often, people were reminded through posters that Big Brother was always watching. However, the people did not have an idea of what it was or what it looked like. All the people know is that all their actions are being watched or heard. Cameras are fixed strategically around the town, and children are compelled to become spies on their own families and parents. Additionally, law enforcement is available and is seemingly instructed to read people’s minds. Despite not living in a totalitarian society like the one described by Orwell, our world today feels so much like that in “1984.”

In today’s world, everyone might be a spy on each other. We keep track of social media posts across numerous platforms today. Social media sites such as Facebook and Instagram allow people to show their everyday moves just like Big Brother is on Oceania’s citizens. However, in the present world, we have compromised our own privacy unknowingly. Social media and the internet in general, have made it easier for people to interact and communicate. Additionally, these platforms facilitate real-time sharing of information that might make individuals lose their privacy or freedom. Winston indicates in his diary that “freedom is the freedom to say that two plus two makes four (P. 103).” Due to the presence of Big Brother and the power of the Party, the people alongside Winston were unable to challenge the beliefs of the Party.

Big Brother also dictated common knowledge. For instance, something evident like two plus two could be altered from four to five, and no one could question it. In accordance with the U.S constitution, we enjoy a sufficient amount of freedom today. The First Amendment allows for each citizen to express themselves through speech. This freedom enables all individuals to think and articulate their ideas and freedom freely. Additionally, this amendment protects the right to petition against the government, something that was inexistent in Oceania.

Moreover, in 1984, the Party rewrote history to capture total control over its people in Oceania. Big Brother and the Party ensured the falsification and destruction of records, as well as the amendment of dates (195). The objective was to alter history and mislead everyone to believe that the Party has never wronged. Also, the government wanted to control what the citizens remembered. “History has stopped. Nothing exists except an endless present in which the Party is always right (195).

In today’s world, some laws prevent the occurrence of rewriting or altering history to align with the interests of government or officials. Also, there are laws and processes that individuals must take in order to change various things. For instance, in the case of name changing, one has to follow processes and rules enforced by the local state. In California, filing petitions in court is necessary. The internet has presented various vulnerabilities that may be effected through hacking, whereby information might be changed on websites to manipulate others into wrong beliefs. Social media has compromised our freedom and right to privacy by facilitating the qualities of Big Brother on each of us.

Essentially, according to the United States Constitution, our constitutional rights are protected for the maintenance of a free and democratic society. Winston Smith was incapable of controlling the watchful eyes of Big Brother. Luckily for us, we are able to turn off our devices and control the extent of private information we share with others. Big Brother facilitates a totalitarian society that does not need to be replicated in our world today.

Parallels between a Novel 1984 and Soviet Union