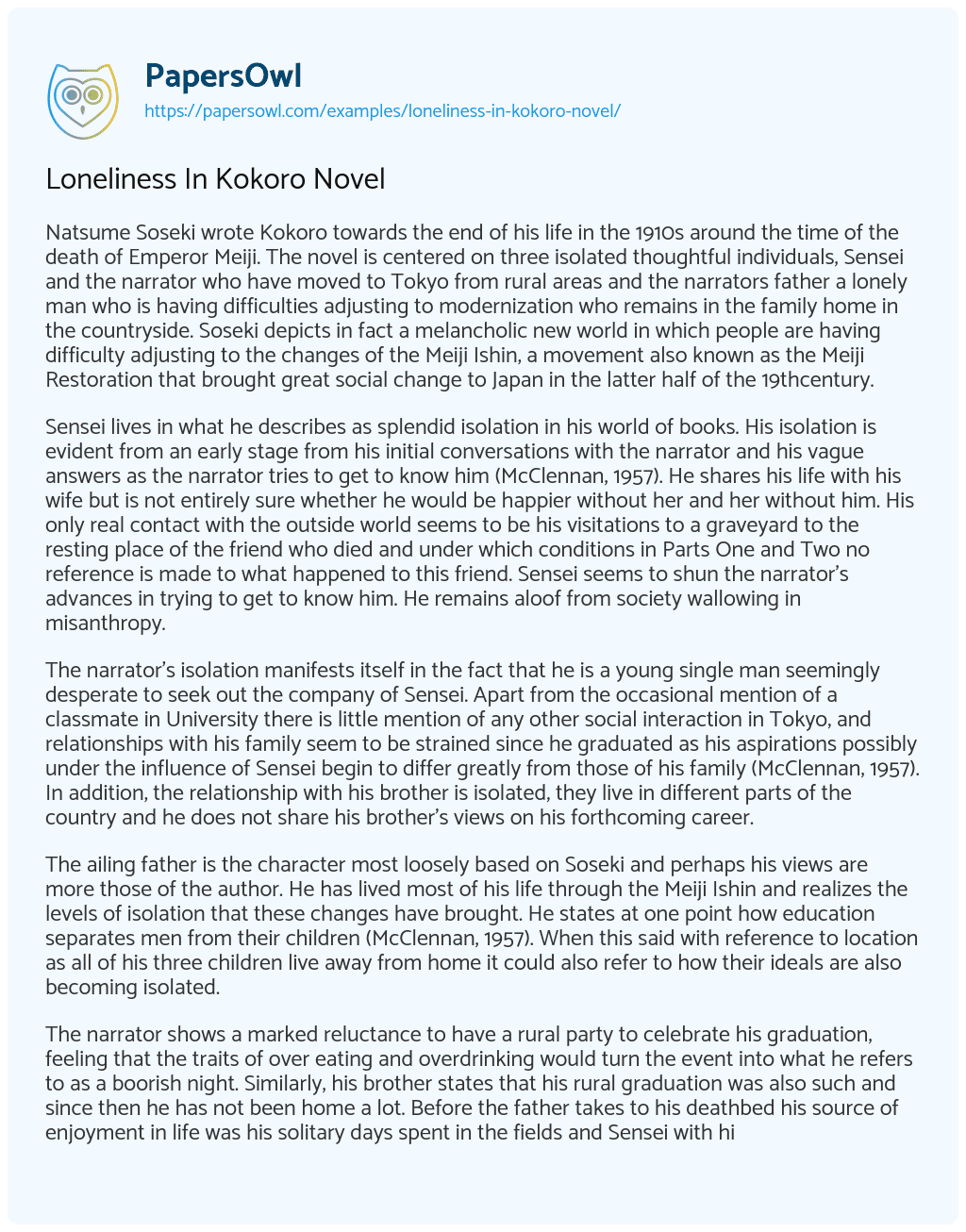 Natsume Soseki wrote Kokoro towards the end of his life in the 1910s around the time of the death of Emperor Meiji. The novel is centered on three isolated thoughtful individuals, Sensei and the narrator who have moved to Tokyo from rural areas and the narrators father a lonely man who is having difficulties adjusting to modernization who remains in the family home in the countryside. Soseki depicts in fact a melancholic new world in which people are having difficulty adjusting to the changes of the Meiji Ishin, a movement also known as the Meiji Restoration that brought great social change to Japan in the latter half of the 19thcentury.

Sensei lives in what he describes as splendid isolation in his world of books. His isolation is evident from an early stage from his initial conversations with the narrator and his vague answers as the narrator tries to get to know him (McClennan, 1957). He shares his life with his wife but is not entirely sure whether he would be happier without her and her without him. His only real contact with the outside world seems to be his visitations to a graveyard to the resting place of the friend who died and under which conditions in Parts One and Two no reference is made to what happened to this friend. Sensei seems to shun the narrator’s advances in trying to get to know him. He remains aloof from society wallowing in misanthropy.

The narrator’s isolation manifests itself in the fact that he is a young single man seemingly desperate to seek out the company of Sensei. Apart from the occasional mention of a classmate in University there is little mention of any other social interaction in Tokyo, and relationships with his family seem to be strained since he graduated as his aspirations possibly under the influence of Sensei begin to differ greatly from those of his family (McClennan, 1957). In addition, the relationship with his brother is isolated, they live in different parts of the country and he does not share his brother’s views on his forthcoming career.

The ailing father is the character most loosely based on Soseki and perhaps his views are more those of the author. He has lived most of his life through the Meiji Ishin and realizes the levels of isolation that these changes have brought. He states at one point how education separates men from their children (McClennan, 1957). When this said with reference to location as all of his three children live away from home it could also refer to how their ideals are also becoming isolated.

The narrator shows a marked reluctance to have a rural party to celebrate his graduation, feeling that the traits of over eating and overdrinking would turn the event into what he refers to as a boorish night. Similarly, his brother states that his rural graduation was also such and since then he has not been home a lot. Before the father takes to his deathbed his source of enjoyment in life was his solitary days spent in the fields and Sensei with his questioning of the narrator constantly provokes the question of what will happen to the land on the death of the father (McClennan, 1957).

Priority was put on education and a move towards more western societies during the period of the Meiji Ishin.  Shimazu Nariamira was at the time greatly interested in western society and technological advancement stated that Japan should try and take the initiative and dominate or else it would be dominated and remains in economic isolation. The effects of technology are described in the lonely depiction of the narrators Tokyo when he advises his dying father to come to the city and see how the trams have spread all over the metropolis (McClennan, 1957).

The greatest change however was the migrations caused by advancement and their effect on individuals (McClennan, 1957). The author depicts characters who live in isolation from the changing world and sometimes a desire to indeed retreat from it as in the case of Sensei a man who has academic qualifications yet seems reluctant to use them and enjoys retiring to the solitude of his study, something that the narrators father sees as idleness and a lack of maximizing resources.

The changes of this time also seem to have the effect of isolating family members from their families. Sensei due to whatever happened in the past has no contact with his immediate family and the narrator’s sister lives in another part of the country and is intent on creating her family there that she forsakes the journey to visit her ailing father. (McClennan, 1957) Likewise, the narrator’s brother seems to put career before family following his graduation in a field more prone to finding employment than the narrator. The effects of urbanization also carry a serious threat to what will become of the family land.

As the father becomes weaker the conversation turns to what will become of the narrator’s mother. She is not able to run the land herself and should the narrator who is fresh from graduating come and assumes the mantle of the homesteader or should the brother forfeit his career as the elder son and come home and assume responsibilities at home (McClennan, 1957). Perhaps Natsume was also aware of the initial changes on the Japanese environment that may have already been showing at this time, trees and gardens and even leaves are described in flurries of color but often in beautiful isolation, while Sensei and the narrator stroll through the city of Tokyo.

The Confucian code based on duty and the old traditions was still prevalent in Kokoro in the rural areas. The educated such as the narrator and Sensei’s sense of isolation is provoked by the difficulty in reconciling the old ways with those which change is bringing. These are the societies in which constant reference is made to in which Sensei in particular was happier when he was a younger man, a fact that both he and his wife refer to several times in Part One.

The father however sees things from the perspective of someone more prone to the natural resistance that comes with age to change. He has accepted the isolation that comes with his educated family making their own ways in the world all well-educated and in good positions to benefit from the new direction that Japan had chosen. In effect the changes being wrought by the influences of modernization from the West seem to be alienating them from the society they grew up in (McClennan, 1957).

The novel serves as a warning to the Japanese that these changes are difficult to accept and that where many may have felt that it was not easy for a Meiji man to marry his beliefs both traditional and modern, and this difficulty is brought to the fore by the novels suicides. None more so that the suicide of General Nogi because it is argued whether this was due to what he perceived as a moral decline in values during Meiji’s reign as emperor or his own acts during his military career (McClennan, 1957). Conscription into the army was also one of the cultural changes of the Meiji Ishin.

Gender roles were also changing during this period of Japanese history, in particular women’s roles in society. The fact that on discussion of the future of the narrator’s family homes future could fall into his mother’s hands was a shift from the past where normally one of the sons would have taken over. Also, in his early visitations to Sensei’s home, the narrator remarks on how Sensei’s wife was gradually becoming more open with him in conversation, even using modern language, in what appears to be two references to this shift in Japanese society (McClennan, 1957).

The significant changes in Japanese society can be summed up as urbanization and industrialization, a move from the old traditional ways on the rural farms to a more educated society living more isolated lives in the city causing breakdown of family units. Gender role also took place at this time and many Japanese had increasing difficulties reconciling the old traditions with the evolving new ideas. This culminated in the senses of isolation and loneliness that dominate the novel.

Loneliness is the Universal Language