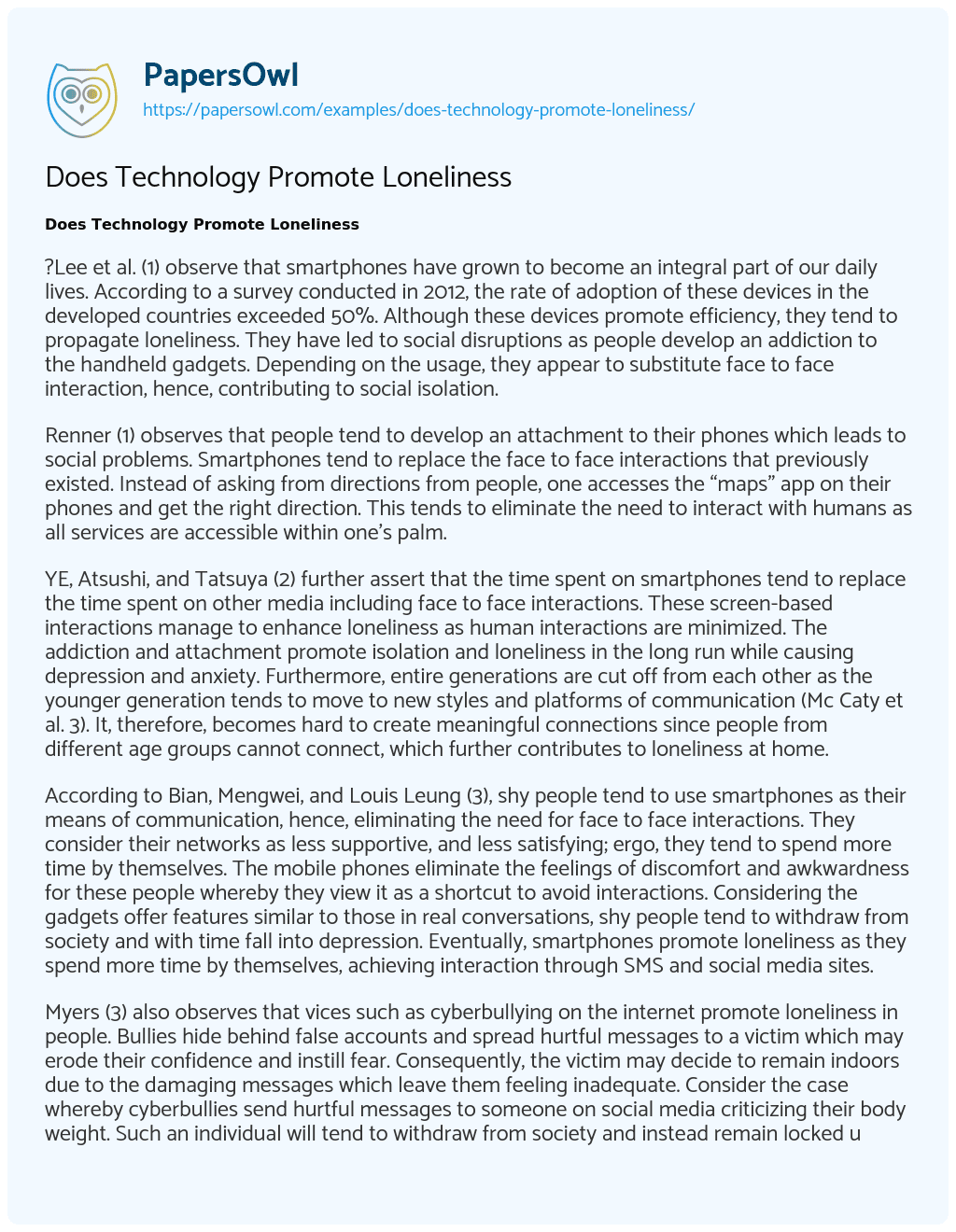 ?Lee et al. (1) observe that smartphones have grown to become an integral part of our daily lives. According to a survey conducted in 2012, the rate of adoption of these devices in the developed countries exceeded 50%. Although these devices promote efficiency, they tend to propagate loneliness. They have led to social disruptions as people develop an addiction to the handheld gadgets. Depending on the usage, they appear to substitute face to face interaction, hence, contributing to social isolation.

Renner (1) observes that people tend to develop an attachment to their phones which leads to social problems. Smartphones tend to replace the face to face interactions that previously existed. Instead of asking from directions from people, one accesses the “maps” app on their phones and get the right direction. This tends to eliminate the need to interact with humans as all services are accessible within one’s palm.

YE, Atsushi, and Tatsuya (2) further assert that the time spent on smartphones tend to replace the time spent on other media including face to face interactions. These screen-based interactions manage to enhance loneliness as human interactions are minimized. The addiction and attachment promote isolation and loneliness in the long run while causing depression and anxiety. Furthermore, entire generations are cut off from each other as the younger generation tends to move to new styles and platforms of communication (Mc Caty et al. 3). It, therefore, becomes hard to create meaningful connections since people from different age groups cannot connect, which further contributes to loneliness at home.

According to Bian, Mengwei, and Louis Leung (3), shy people tend to use smartphones as their means of communication, hence, eliminating the need for face to face interactions. They consider their networks as less supportive, and less satisfying; ergo, they tend to spend more time by themselves. The mobile phones eliminate the feelings of discomfort and awkwardness for these people whereby they view it as a shortcut to avoid interactions. Considering the gadgets offer features similar to those in real conversations, shy people tend to withdraw from society and with time fall into depression. Eventually, smartphones promote loneliness as they spend more time by themselves, achieving interaction through SMS and social media sites.

Myers (3) also observes that vices such as cyberbullying on the internet promote loneliness in people. Bullies hide behind false accounts and spread hurtful messages to a victim which may erode their confidence and instill fear. Consequently, the victim may decide to remain indoors due to the damaging messages which leave them feeling inadequate. Consider the case whereby cyberbullies send hurtful messages to someone on social media criticizing their body weight. Such an individual will tend to withdraw from society and instead remain locked up in their rooms. Furthermore, the individual will find it safer to interact with others via their devices as opposed to meeting them face to face.

Nonetheless, smartphones also tend to combat loneliness due to the numerous provisions they have. There are various communication applications to cater for the many user needs including voice calls and video calls, whereby one can reach out and converse. Consequently, smartphones facilitate communication and connection among people who are far apart (Mc Cathy 3). Consider the case of a man serving the army in the Middle East, video calls via a smartphone to his family will help take away any feelings of loneliness. Additionally, they facilitate immediate and unrestricted communication as well as real-time sharing.

Music listening is also an effective means of coping with loneliness (Sheibani et al. 1). According to the study conducted by Sheibani, music therapy helped the older adults under investigation to combat depression and loneliness. It had the overall effect of improving mood and enhancing wellbeing. Furthermore, the adolescents tend to modify their moods and emotion through listening to music which eliminates any feeling of loneliness. Smartphones, on the other hand, provide an avenue where people can stream music online or even download and listen offline. Eventually, one may use these gadgets to help regulate their moods and eliminate feelings of loneliness.

To combat loneliness, it is evident that one can use their smartphone to connect to their loved ones or even access music through the device to help uplift their mood. However, these devices cannot replace face to face interactions which they try to cut off. The platform is less satisfying and cannot adequately replace human interactions. From the studies above, it is also apparent that the devices in addition to shy characteristics in individuals contribute to introvert behaviors leading to loneliness. Furthermore, activities such as cyberbullying propel people to hide behind their screens which discourages them from going out and interact actively with the society. In conclusion, smartphones as a technology greatly encourage loneliness.

The Negative Impact of Technology on People