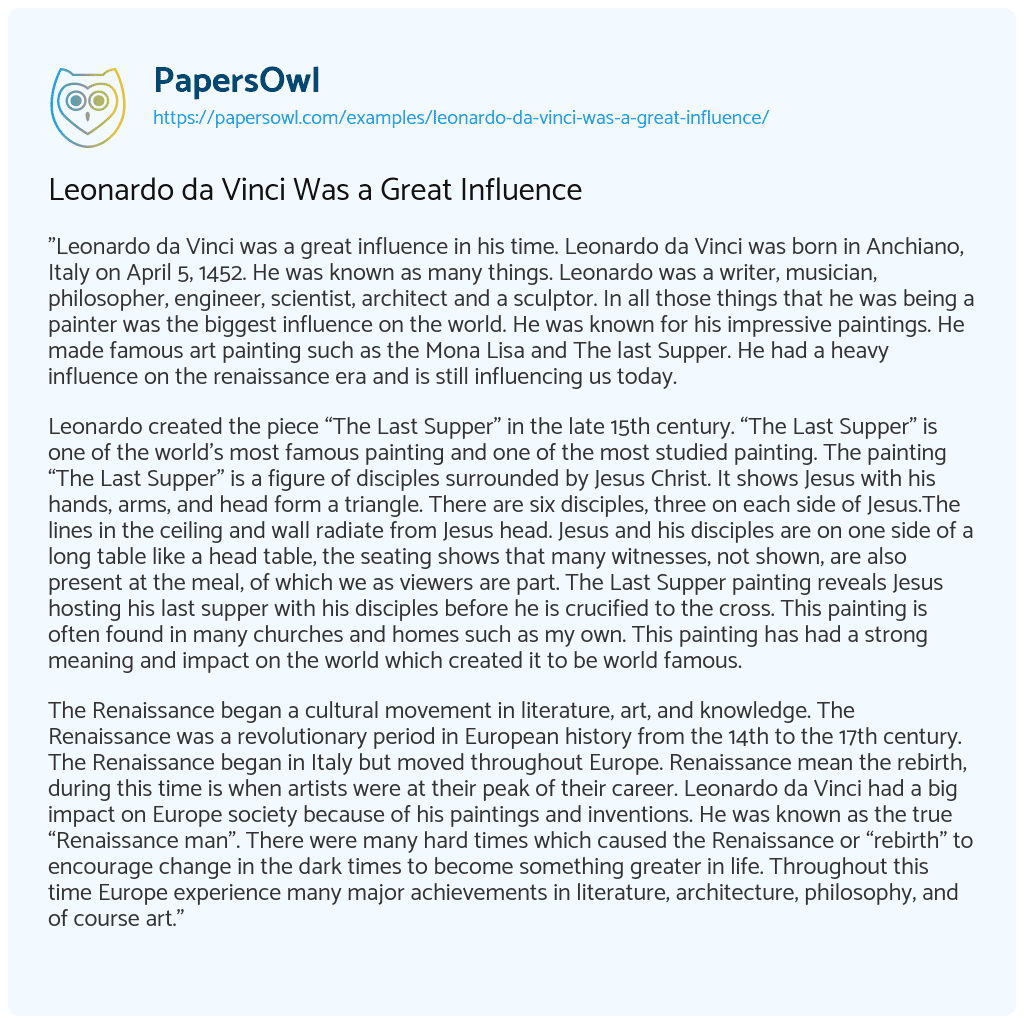 “Leonardo da Vinci was a great influence in his time. Leonardo da Vinci was born in Anchiano, Italy on April 5, 1452. He was known as many things. Leonardo was a writer, musician, philosopher, engineer, scientist, architect and a sculptor. In all those things that he was being a painter was the biggest influence on the world. He was known for his impressive paintings. He made famous art painting such as the Mona Lisa and The last Supper. He had a heavy influence on the renaissance era and is still influencing us today.

Leonardo created the piece “The Last Supper” in the late 15th century. “The Last Supper” is one of the world’s most famous painting and one of the most studied painting. The painting “The Last Supper” is a figure of disciples surrounded by Jesus Christ. It shows Jesus with his hands, arms, and head form a triangle. There are six disciples, three on each side of Jesus.The lines in the ceiling and wall radiate from Jesus head. Jesus and his disciples are on one side of a long table like a head table, the seating shows that many witnesses, not shown, are also present at the meal, of which we as viewers are part. The Last Supper painting reveals Jesus hosting his last supper with his disciples before he is crucified to the cross. This painting is often found in many churches and homes such as my own. This painting has had a strong meaning and impact on the world which created it to be world famous.

The Renaissance began a cultural movement in literature, art, and knowledge. The Renaissance was a revolutionary period in European history from the 14th to the 17th century. The Renaissance began in Italy but moved throughout Europe. Renaissance mean the rebirth, during this time is when artists were at their peak of their career. Leonardo da Vinci had a big impact on Europe society because of his paintings and inventions. He was known as the true “Renaissance man”. There were many hard times which caused the Renaissance or “rebirth” to encourage change in the dark times to become something greater in life. Throughout this time Europe experience many major achievements in literature, architecture, philosophy, and of course art.”

Leonardo Da Vinci was One of the most Important People